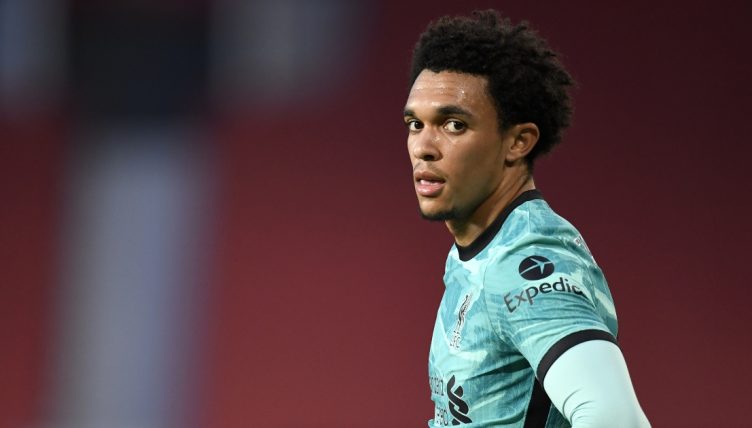 One way to get out of any household chores is to do them so badly first time around that you’re never asked again.

The thinking behind this pearl of dubious wisdom is that you’re judged against your previous accomplishments rather than anything else.

Which leads us nicely to Trent Alexander-Arnold.

He only made his professional debut for Liverpool in the 2016-17 season, but Alexander-Arnold has already packed in a career’s worth of ups and downs.

From an inexperienced youngster, the full-back quickly became widely recognised as one of the world’s best as Liverpool hoovered up trophies under Jurgen Klopp.

This year has been more difficult. As the champions struggled under a deluge of injuries, Alexander-Arnold seemed more affected than anybody by Liverpool’s defensive woes.

Previous whispers that he lacked something defensively quickly became a consensus. As a consequence, the 22-year-old was dropped from the England squad in March to much controversy. Seriously, it felt like even secluded tribes in the Amazon rainforest held an opinion on the matter.

Alexander-Arnold has responded like all elite footballers should; by rolling up his sleeves and doubling down on what made him so highly regarded in the first place.

There was an outstanding assist against Arsenal, where a brilliant delivery completely bamboozled their defence and left Diogo Jota with the pleasant task of nodding home. A half-volley against Real Madrid almost became the assist of the season. That’s without mentioning the Gerrard-esque winner against Aston Villa.

Liverpool have quietly re-entered the race for Champions League qualification and not even the hoopla over decoy buses could distract them from their task of Old Trafford.

Alexander-Arnold epitomised the renewed steeliness of the deposed champions. Recovering from Bruno Fernandes’s somewhat lucky opener, Liverpool doubled down and started to unpick their arch-rivals.

With half-time approaching and the scores level at 1-1, Liverpool won a free-kick in what’s become unofficially known as ‘Trent territory’.

He stood over with an air of supreme confidence, of a man who could deliver an inch-perfect set-piece in his sleep. We all knew what would happen next.

A strut and a skip later, reminiscent of a world-class bowler stepping up at Lord’s as much as a footballer playing at Old Trafford, Alexander-Arnold had whipped a delicious ball directly onto the head of Roberto Firmino.

Firmino did the appropriate thing and buried the header past Dean Henderson to give Liverpool a lead they wouldn’t relinquish.

The game’s defining moment wasn’t the sum total of Alexander-Arnold’s contribution. There was a further assist for Roberto Firmino’s second. There was a nutmeg on Paul Pogba that sent him on the tram to Didsbury. There was an awe-inspiring pass that sent Sadio Mane through on goal.

Never mind food for thought, the watching Gareth Southgate was presented with a gourmet buffet for his troubles.

Players such as Alexander-Arnold don’t come along very often and it would be an act of extreme self-harm to leave him out of the squad for next month’s European Championships.

He’s even a right-back for Christ sakes. Get to it, Gareth.

His form has considerably picked up since his international snub in March and the Liverpudlian made Old Trafford his playground.

We’re all judged against our past accomplishments and indications are that Alexander-Arnold is back to his best.