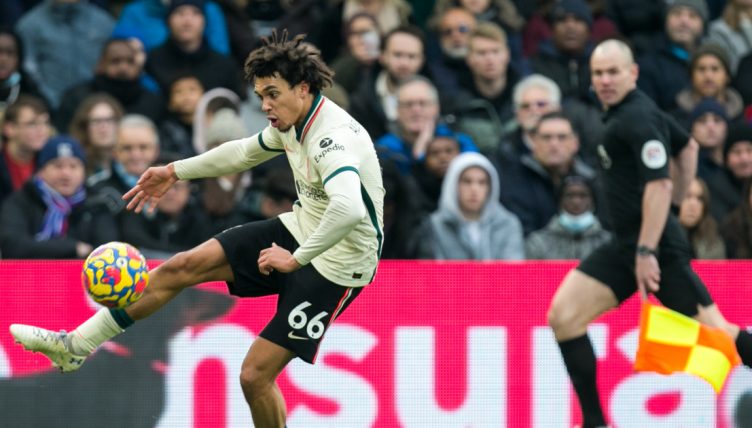 With their crucial Premier League match against Crystal Palace coming to a close, Liverpool were under the cosh.

They might have been 2-1 up, but for most of the second half Crystal Palace had them on the ropes and were looking for a knockout blow that would level the match and surely kill off Liverpool’s title hopes.

It was almost as if Jurgen Klopp had purposefully turned up the difficulty setting on the match at half-time, with Liverpool now struggling to hold on after having been so dominant in the first half.

But then Trent Alexander-Arnold stepped up, typed in the cheat code, and sent a perfect pass from one end of the pitch to the other.

Alexander-Arnold is the blueprint for the modern wing-back, with a passing range that would make even his team-mate Thiago Alcantara blush.

And the England international demonstrated again just how impressive he is with his 85th-minute golf drive of a pass.

Liverpool had been under pressure for almost 40 minutes by that point, Patrick Vieira’s Eagles threatening to snatch a late equaliser.

So when Alexander-Arnold stopped a Palace attack, intercepting a dangerous ball down the right of Liverpool’s defence, he had the same thought most would have in his position: get the ball forward and away from my goal.

But there was a crucial difference. where most would have been content with an aimless lump, Alexander-Arnold looked up, saw Diogo Jota making a run in behind – just about as far away from him on the pitch as possible – and decided he had it in his locker to find the Portuguese attacker.

Jordan Henderson was fuming. He could see that the right-back was considering smashing the ball up the other end of the pitch and was desperate to persuade him against it.

The Liverpool captain put his hand out in front of Alexander-Arnold to tell him to calm down.

“Just play a simple ball to me,” he was saying with his gestures. “Don’t be immature and hit the ball up the other end of the pitch,” he must have thought.

Then Alexander-Arnold hit the ball up the other end of the pitch… and it was absolute perfection.

It would have been an immature decision if it was any other right-back, but Liverpool’s hometown hero knew it was a safe bet the ball would end up at Jota’s feet.

His long cross-field passes are like cheat codes in a computer game and this one was no different.

It flew perfectly into Jota’s path, splitting the Palace defence asunder like Alexander-Arnold was directing them with his PlayStation controller.

Actually, does anyone know what happened to the drone that stopped the Brentford versus Wolves game?

Because such was the stunning nature of this pass it could very easily have been a drone dressed up as a football and flown to the feet of Jota by Klopp under his big jacket, like Father Ted in the All-Priests Over-75 Five-A-Side Football Challenge Match.

“Wow,” Jamie Carragher said when the ball left Alexander-Arnold’s feet. That just about sums it up.

From the vision to see Jota’s run, to the ability to be able to pass that far and to the accuracy of the ball, this was a simply breathtaking display of class from Alexander-Arnold.

Oh and Jota won a penalty from it as well. Because of course he did.

With Mo Salah and Sadio Mane off at the African Cup of Nations much was made about how Liverpool would cope without their two star men.

“What’s important is that we did it without them,” Klopp said after the Palace match. “You have to create a new football because we don’t have that maximum speed on the wing which obviously Sadio and Mo have. All of a sudden you have to change how you get there, to these areas.”

That’s a lot easier when you have Alexander-Arnold pinging perfect balls from one end of the pitch to the other.

Without Salah and Mane, the 23-year-old’s importance to Liverpool has only become more obvious.

Headlines have focussed on Jota, who won the crucial penalty against Palace and scored twice against Arsenal, but Alexander-Arnold’s ability to turn defence into attack with just one kick is at the centre of what makes Liverpool so dangerous.

He delivered an almost identical ball for Jota’s second against Arsenal as the one he delivered against Palace.

LIVERPOOL HAVE ONE FOOT IN THE FINAL! 🤯

Jota's excellent chip is originally given as offside until VAR rules that Gabriel was keeping him on!! pic.twitter.com/9EBVcSSnwT

The transition period becomes just however long it takes the right-back to swing his leg to meet the ball, meaning that for all of Palace’s second-half pressure just one ball from Alexander-Arnold killed the game.

Liverpool have now built serious momentum and have Manchester City in their sights in the hunt for the Premier League title.

If they manage to catch them, Alexander-Arnold’s cheat code passes will be one of the main reasons why.