Manuel Locatelli & two touches that catapulted him into the mainstream 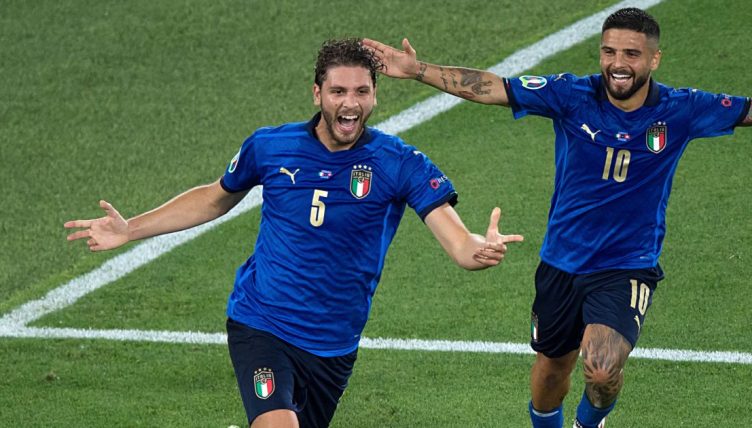 This might be hard to believe, so ready yourself. Take a deep breath, do whatever you need to get comfortable. There are some people – and I’ve checked this to make sure – who don’t like football as much as you and I.

I cannot explain why, I will have to leave that to the experts. But I can assure you it is true.

‘How many of those were line-breaking passes, though?’ says @OzilFan1997 on Twitter.

Some of these people, the ones who don’t inhabit the above-described reality, still like football. It might be in a way you find annoying, but they like it nonetheless.

They watch a few big Premier League games a season in the pub. They’ll probably catch the final of the Champions League. And over the last week, they’ll doubtless have sent you a WhatsApp message saying something like, ‘Did you see that goal? OMG!’

The thing is, even those football fans – the I-sort-of-like-football-once-every-two-years brigade – will be surprised by little of what happens at Euro 2020.

Football is such a ubiquitous cultural phenomenon, and footballing talent is so intensely concentrated at a few big clubs in a few rich leagues, that even intermittent observers go into major tournaments knowing the ins and outs of the big nations’ big stars. And, usually, it is those players who decide the outcome of these things.

Rarely, now, does an unknown player charge in from leftfield to take an international championship by the scruff. But on Wednesday night, with a 60-yard run and two magnificent touches of a football Manuel Locatelli made himself one of those rare, unknown players.

A loose ball dropped to him in his own half and, without looking, on the volley, with his left foot, he spread it out wide. His mate Domenico Berardi took the ball down the line and as he did, Locatelli burst forwards. Berardi crossed and, nine seconds after his volleyed pass, Locatelli battered the ball into the back of the net from inside the six-yard box.

It was midfield perfection. It was a moment in which Manuel Locatelli announced himself to the world.

You might sneer. You, like @OzilFan1997, might think, ‘But we already knew about Locatelli’s deep-lying creative work. He’s been a central cog in Roberto di Zerbi’s sensational Sassuolo side since 2018 and before that he was at AC Milan.’

Now, though, with those two touches and that 60-yard run, he has burst onto the mainstream collective sporting consciousness. And that is refreshing. It is fantastic, in fact. And it was once what made major tournaments even more seductive than they are now.

As Gordon Strachan told us when we spoke to him before this Euros, major tournaments, before the ubiquitous coverage of club football, were the only way for a player to catapult themselves out of obscurity. “Nobody else in the world had seen you then, apart from at the World Cup,” Strachan said.

That has changed and the change, for better or worse, is irreversible. But sometimes major tournaments can still be launchpads for careers, they can still spring a surprise.

With Locatelli imperious in the centre of Rome’s Olympic Stadium and Roberto Mancini’s team looking well-oiled around him, Italy could go a long way at Euro 2020. If they do, a previously unknown quantity may be the name on everybody’s lips come July 11.