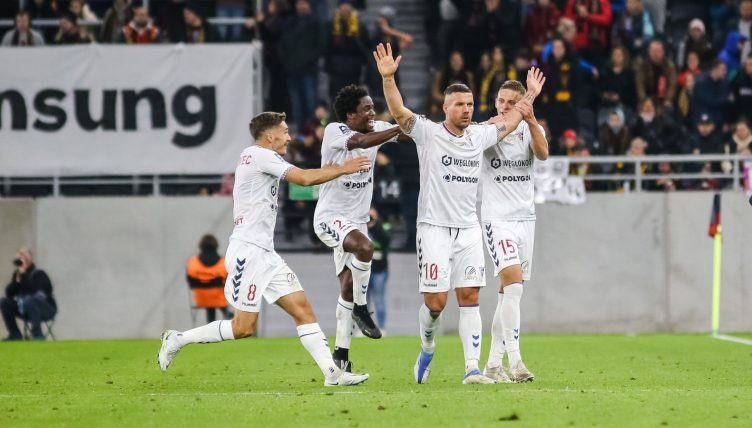 Just stop what you’re doing and look at this bloody goal.

Lukas Podolski always appeared like one of those annoyingly perma-youth players who, when you’re collecting your pension and hobbling down to the bus stop with your Zimmer frame, would still be zooming up and down the wing of a European stadium.

So it came as quite a shock to discover that Podolski is actually 37. That’s the same age as Cristiano Ronaldo and older than Lionel Messi. Blimey.

Happily, the former Arsenal man hasn’t appeared to lose any of the magic that made him one of Europe’s most exciting players in his prime.

Making mugs out of opposition defenders, blasting the ball into the net from somewhere in the outer solar system and attempting tricks just because he can, Podolski is treating Polish football like his own personal playground.

And he produced his most outrageous moment yet in the dying embers of Gornik Zabrze’s match with Pogon Sczczecin on an autumunal evening in central Europe.

It initally looked like there was nothing on when Podolski became the grateful recipient of his team-mate’s crunching tackle; the ball rolled around in No Man’s Land harmlessly with people in the crowd perhaps taking a moment to check their phones or take a bite of their sandwiches.

They should’ve known better. We all should’ve. Because, in less than a heartbeat, Podolski had spotted the goalkeeper marooned out of his goal and swept a gorgeous shot over his head and into the net.

The goalkeeper’s despairing and hopeless attempt at salvaging his dignity just added to the optics of Podolski’s moment of impudence. Despite being top of the Premier League, this is by far the best thing we’ve seen anybody associated with Arsenal achieve all season. Glorious.

I would like to be the first to congratulate Lukas Podolski on winning the 2023 Puskas Award 💥 pic.twitter.com/GUbpYdWAcY

“I don’t know. I had some games I played very well, I scored goals or played well and the next match I was sitting on the bench again,” Podolski said in 2020 about his decision to leave Arsenal. “That’s why I started thinking, ‘I’m going to have to change this situation.’

“For any reason it sometimes happens like that in football or sport and that’s why I decided to move. This is life, this is sport, I didn’t want to but I had to because I wanted to play football.

“I wanted to be on the pitch but I would have loved to stay at Arsenal for a couple more years because I felt really great there.

“The team, the stuff around the team and everyone at the club was so friendly – like a family. Great fans, great city, the stadium – everything! I really enjoyed it but in the end it is like it is.

“I had some talks with Arsene about my situation and I told him, ‘I want to play, I want to come on earlier’ and of course, he’s the coach, he has to decide, he can’t promise players a bonus or to always play. No coach gives you that. So I decided for myself to move forward.”

Since leaving Arsenal in 2015, the German World Cup winner has plied his trade for Inter Milan, Vissel Kobe, Galatasaray and Antalyaspor before landing at his current side Gornik Zabrze.

And we’re delighted to announce that Podolski is just as drippy as he always was.

READ MORE: The Londoner who played for Arsenal but couldn’t face the lower leagues

TRY A QUIZ: Can you name every player to get 20+ Premier League assists for Arsenal?