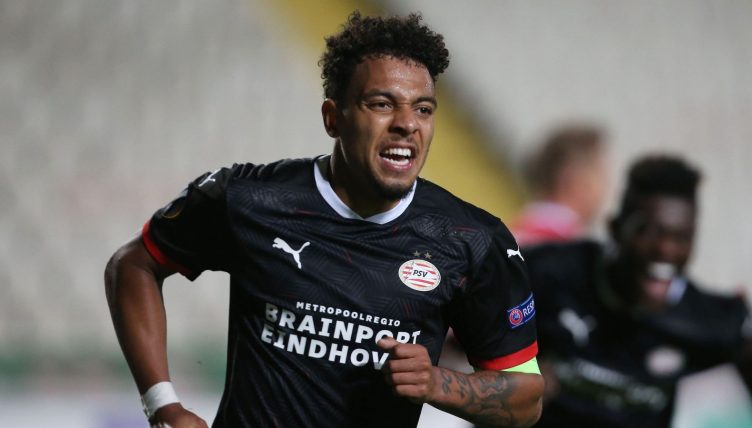 Arsenal‘s scoring struggles go on, but academy graduate Donyell Malen is proving anything but goal-shy for PSV.

Pierre-Emerick Aubameyang might have got back into the goal-scoring groove on Wednesday as Arsenal drew 1-1 with Southampton, but that will have only done so much to cheer up despondent Gooners.

Including that Aubameyang equaliser, to which Arsenal clung after Gabriel Magalhaes was sent off in the 62nd minute, Mikel Arteta’s team have scored just three times in their last nine league games. Boring, boring Arsenal, as the terraces used to sing.

The lack of inventiveness and incision in the Arsenal ranks has been the focus of fan discussions and pundit analysis, but even when they have managed to create chances this season, their finishing has been wayward.

To make things worse, Arsenal fans were forced to watch as Emirates old boy Theo Walcott serenely and delightfully dinked the ball over Bernd Leno to open the scoring – exactly the sort of thing he was repeatedly accused of failing to do during his time in north London.

And Walcott, it seems, is not the only forward who has located his shooting boots since a move away from the Emirates.

At the same time as Arsenal were trying to fend off Southampton’s late push for a winner last night, their former youth player Donyell Malen was hammering his current employers PSV Eindhoven into the third round of the Dutch Cup is the most spectacular style.

Malen spent most of his youth at Ajax before moving to Arsenal in 2015 for, as he said at the time, “two main reasons; Dennis Bergkamp and Thierry Henry.”

Malen’s talent soon saw him sign professional terms and he went on to score 44 goals for Arsenal’s youth teams in two seasons at London Colney. 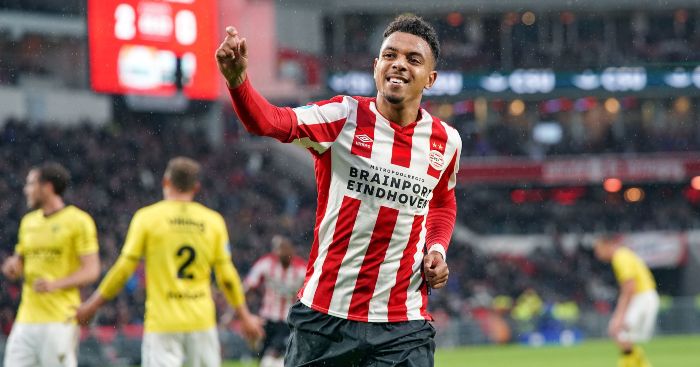 The Gunners were keen for him to extend his deal, but in 2017, with first-team chances limited, he decided to move back to his homeland with PSV. Arsenal were paid a meagre £540,000 with no buyback clause inserted into the deal.

Whoever presided over those negotiations must now be kicking themselves. Over the last two seasons, Malen has become one of the hottest talents in Europe, adding himself to the long list of ex-Arsenal youngsters who have gone on to thrive elsewhere.

Last season, Malen banged in 17 goals in 25 club games – including five in one match against Vitesse Arnhem – and a first international goal – against Germany, no less – before a knee ligament injury curtailed his campaign in December.

He returned in August and after eight months out could have been forgiven for showing a little ring rust. But the young No.9 instantly rediscovered his form.

His direct running, skill and beautiful balance have tied defenders in knots, and his increasingly deadly finishing has got him goals both at home and in Europe.

Now 21, the Dutchman has six in 11 in the Eredivisie in 2020-21 and seven in nine in the Europa League. And on Wednesday night, he added to that with an absolute scorcher in the cup.

PSV, who currently sit second in the Eredivisie just three points behind Ajax, were already a goal ahead in the knockout tie against De Graafschap. But with the end of the game approaching and the result not quite tied up, Malen wanted to make sure.

He picked the ball up just to the left of the centre-circle, before beating his markers with a feint and jink inside. With it all opening up ahead of him, there was only one thing on.

Malen unleashed a Cristiano Ronaldo-esque knuckleball drive from a full 35 yards, which swerved and dipped before nestling satisfyingly in the back of the onion bag. Job done.

One of the best young talents in the Eredivisie, and he won’t be there for long. #PSV pic.twitter.com/yly6zMd1o9

Granted, a fair few strikers have failed to score in England after netting for fun in the Netherlands (we’re looking at you, Afonso Alves).

But the fact that Borussia Dortmund are reportedly lining up to take Malen as a replacement for Jadon Sancho and Juventus are jostling for position in the queue gives some indication of the regard in which he is held by Europe’s top scouts.

There has also been talking of Arsenal doing a deal to bring him back to the Emirates, but with Arsenal’s ongoing struggles in front of goal, Malen could be forgiven for fearing that a return to his old stomping ground could turn his hot streak cold.