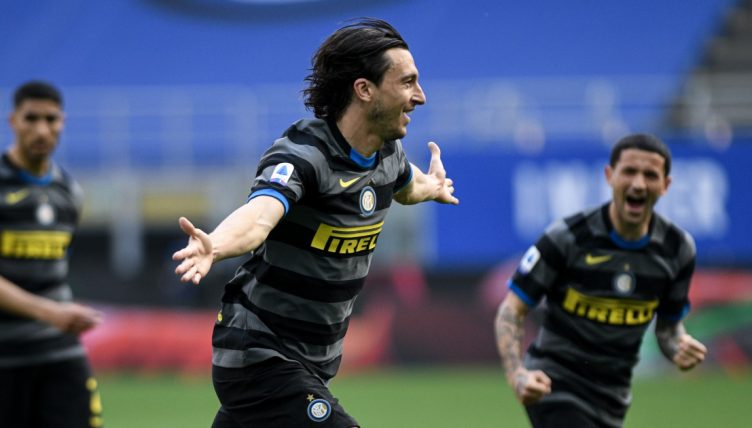 Every football team is always searching for that sweet spot. Few find it, and even when they do, it usually doesn’t last long. You can’t even really describe it, not precisely. But when your team’s in it, you know it and there are few things better.

In the groove, some say. Psychologists call it ‘the flow state’.

Passes are being pinged perfectly into feet, 50-50 challenges are consistently being won, shots are flying just the right side of the post at both ends of the pitch, deflections are falling your way, referees’ decisions are even going in your favour, Matteo Darmian suddenly becomes a world-class, match-winning goalscorer.

Err, well… maybe not always that last one. But if you’ve got Matteo Darmian in your squad, as Antonio Conte currently does at Inter Milan, and Matteo Darmian has won you six of your last eight points with two dramatic late goals, then make no mistake, this is your time.

Not that we think Darmian is a bad player. Don’t get us wrong here, we had him down as a decent, relatively solid option. It might not have worked out as expected at Manchester United, but – as his Inter team-mate Romelu Lukaku has repeatedly shown us this season – that doesn’t mean he’s useless.

Darmian’s got 36 Italy caps, for crying out loud.

Yet on Sunday, Darmian scored his second match-winner in a little over two weeks to push Inter a big step closer to a first Serie A title since time almost-immemorial. You know, those weird, long-gone days when Jose Mourinho still had an aura of invincibility.

Inter were hosting Hellas Verona and, deep into the second half, they were still searching for a winner. Juventus, who started the day in third, were being held by Fiorentina. An Inter winner would put more distance between them and the chasing pack, and they had been knocking on the Verona door.

Lautaro Martinez had fashioned a fine chance for himself, which was saved by the ‘keeper. Christian Eriksen had sent a volley wide. Achraf Hakimi had battered a free-kick off the woodwork.

But there was no way through until three former Manchester United players, two of them second-half substitutes, combined with 13 minutes left on the clock, producing the sort of slick counter-attacking sequence that Conte drills into his teams – the sort that would make Mourinho’s and Ole Gunnar Solskjaer’s hearts fill with envy.

Romelu Lukaku held the ball up in midfield, turned and fed Alexis Sanchez. Sanchez swivelled and found Achraf Hakimi, who had made the run between the lines. Hakimi looked up and saw his fellow wing-back Darmian flying up the left flank. The door was finally open.

Darmian got the ball in the penalty area, took one touch and coolly slotted the ball between a defender’s legs and into the far corner of the net. Like we said, he wasn’t this player.

As odd as that sight might have seemed to United fans, for Inter fans it was like deja vu all over again.

Two Saturdays ago, Inter had been in exactly the same position; 76th minute, pushing for a goal. They had hit the woodwork and seen two Christian Eriksen shots brilliantly saved.

Then the combo. The hold-up play from Lukaku, the assist from Hakimi and the finish from Darmian, that time-stealing in at the back stick to convert a low cross.

11 points clear with 8 rounds to go, @Inter_en are closing in on their first 𝗦𝗰𝘂𝗱𝗲𝘁𝘁𝗼 since 2010 🏆 pic.twitter.com/xgOfDi0425

The two goals in four games have put Inter in the most commanding of positions. Even if city rivals AC Milan beat Lazio away from home on Monday night, Inter will still be 10 points clear with five games to play. It would be some feat to throw it away from here.

For Darmian, this late run of form could get him closer to his ultimate aim, too. When he left United for Parma in 2019, he said it was to “get back in the Italy team.” With Euro 2020 approaching, Roberto Mancini will be scratching his chin.

On Sky Italia yesterday, Darmian was compared to Italy’s World Cup 2006 full-back Fabio Grosso, who scored in the World Cup semi-final and converted his penalty in the final shootout to help Italy to their fourth title.

Darmian has spent most of this season filling in: for Achraf Hakimi on the right when he is out or rested, and rotated with Ashley young and Ivan Perisic on the left. Now, though, he is coming to the fore. And, like Grosso, he’s timed his surge to perfection. Maybe Italy could do with an in-form full-back once more.

But for now, one thing alone interests Inter fans. Matteo Darmian’s making a habit of scoring in black and blue, which can only be a sign: Inter are in the groove and Conte’s side are closing in on the title.