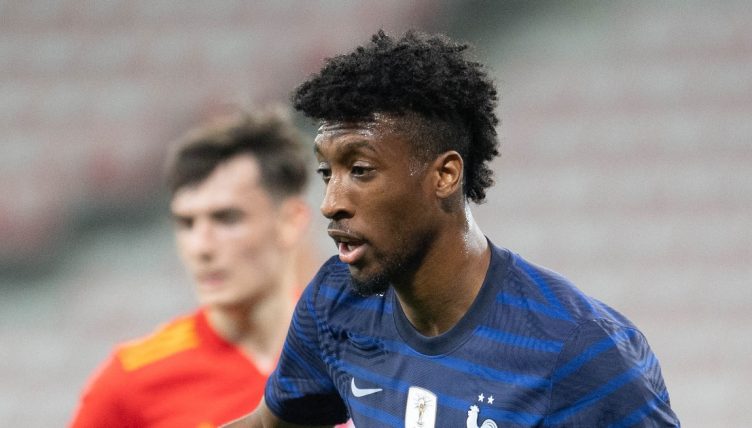 There are many ways prospective Liverpool signings can endear themselves to their new club.

Score the winning goal in front of the Kop. Sprinkle in references to the Boot Room and Bill Shankly during interviews. Publically support the Hillsborough Justice Campaign.

But Kingsley Coman has gone about things in a slightly different manner.

Coman has been linked with a move away from Bayern Munich after finding it difficult to secure a regular starting slot with the Bundesliga side.

This isn’t necessarily a criticism; the 25-year-old is a winger of great speed and skill but so are Leroy Sane and Serge Gnabry. Opportunities are harder to come by at the German champions than almost anywhere else.

And not only is Coman a fantastic footballer, but he’s also remarkably won the league title in each of his 10 seasons as a professional with PSG, Juventus and Bayern. There should be a queue of eager clubs wanting to sign this good-luck charm.

For his part, Coman has previously spoken of his desire to play in England.

“For me, it is the most interesting league in the world,” Comas told The Guardian in 2016. “My career is just starting so you never know. But England has a league where every player would like to play.”

He may have the chance thanks to Liverpool’s interest. And Coman will have done his popularity no harm by ragdolling Manchester United’s Bruno Fernandes at Euro 2020.

The forward didn’t appear in France’s two opening group matches. An unused substitute against Germany, he missed the draw with Hungary after requesting leave to attend the birth of his child.

With Didier Deschamps’ world champions not quite clicking in attack, despite the plethora of riches available to them, Coman was given the chance to stake his own claim during the second half against Portugal.

His introduction had the same effect as injecting Red Bull directly into your veins.

Despite Karim Benzema’s two goals, France had been flagging and Coman’s introduction provided some much-needed movement and speed.

Following his arrival in the 67th minute, the Bayern winger created havoc down Portugal’s right flank and created opportunities that Benzema and Antoine Griezmann squandered.

Coman also proved his defensive worth by chasing back and nicking the ball of Cristiano Ronaldo’s toes, much to the chagrin of the Portugal captain.

But the moment that should excite Liverpool supporters arrived in injury-time of a pulsating 2-2 draw.

The substitute received a short pass from Moussa Sissoko and began to progress goalwards from the left flank.

Comanthen temporarily metamorphosed into Paul Daniels and dipped into his magic box of tricks, dragging his ball over his foot and completing stepovers like an artist flinging paint at a blank canvas.

Fernandes stood his ground and waited for the perfect moment to pounce. The United talisman had not been enjoying a good tournament but would have felt relatively confident of seeing off this new threat.

He shouldn’t have been. Coman dragged the ball towards the byline before powering past his opponent like someone accessing the bullet boost on Mario Kart.

Fernandes resorted to an illegal solution, dragging Coman down inside the penalty area. Given the softness of the penalties awarded earlier in the game, many would have expected the referee to point to the spot. Fernandes has certainly been given them for less.

But a fourth penalty, like Jeremy’s four naan breads, would have felt excessive. Antonio Miguel Mateu Lahoz refused to award one and VAR backed his decision. The sight of Coman rolling around clutching his knee probably did his claim no favours either.

Look beyond that and here was the dynamism that Liverpool lacked last season. Mo Salah continued to bang in the goals, but the contributions of Sadio Mane and Roberto Firmino left plenty to be desired and there’s a growing air that Liverpool’s squad is one that requires refreshing.

Coman can provide that. Here is a top-class winger, capable of playing on either wing, with a point to prove after being sidelined for both club and country.

Plus, he treated Fernandes with all the respect of a smart-arse teenager disregarding their parent’s curfew.

All you need to know about Conor Bradley, already catching Klopp’s eye