Napoli captain Lorenzo Insigne put in a display worthy of the Stadio Diego Armando Maradona on Sunday, taking centre stage in a 6-0 mauling of Fiorentina.

It’s on such breathtaking displays of brilliance, from a son of Naples no less, whereby a lack of fans in the stands is all the more keenly felt. Insigne deserved to be cheered and applauded.

Dries Mertens, and before him Marek Hamsik, may have surpassed Maradona’s legendary goalscoring record at Napoli, but it’s Insigne who best embodies the Spirit of Diego – as clear as day on occasions such as this.

Opening the scoring after just five minutes, he got his second to put Napoli five ahead midway through the second half, rifling home from the penalty spot.

But as was often the case with Maradona, there was so much more to enjoy than just the goals. In fact, his finest moment came in the 37th minute with his assist for Hirving Lozano.

It was the kind of sheer individual brilliance that prime Diego brought to Mexico ’86. It makes you want to load up video editing software, put it through a VHS filter before overlaying those wonderfully bold and blocky graphics.

There’s even a perfect snapshot taken early in the move, of which Maradona’s career produced so many, whereby Insigne has the ball at his feet and is crowded out by multiple opposition players. But can they stop him? No chance. 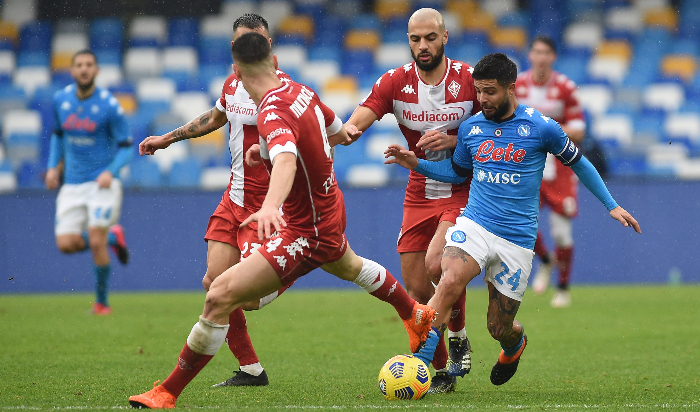 You have to go back and check again that the move really developed as you think it did, with Insigne receiving the ball deep in his own half, taking a deft touch to beat a Fiorentina midfielder and setting the tone for what was to come.

It looks for all the world a dead-end from there, and more boring players might well have turned, held up the ball, seen what was behind them and recycled possession. But not Lorenzo il Magnifico.

With the beaten man hot on his heels, there are two more Fiorentina players standing between the attacker and their half, but he skips past them if they’re not there to go striding into the opening green space.

Such is his acceleration, Insigne is the furthest Napoli player forward and has been shuttled out wide. Once again, poor Sofyan Amrabat catches up, but following a quick shimmy, the Moroccan midfielder is left in his wake.

“Take a shot of Maradona, because the twisting and turning and the ability, certainly is reminiscent of the great man,” were the words of Premier Sports commentator Tony Dorigo.

Weaving infield, finally there’s a team-mate ahead of him. But picking out Lozano is easier said than done: not only is Insigne crowded by four players, but there’s a covering defender in the six-yard box and Fiorentina keeper Bartlomiej Dragowski on hand to sweep up.

To find the Mexican winger, Insigne must play the ball at the perfect angle, with the just the right amount of force behind it. Of course, he manages it.

Absolute GENIUS from Insigne to set up Lozano! 🙌

Napoli are 3-0 up and absolutely rampant now 🔥 pic.twitter.com/3QzqSPbAKc