Lovren celebrated a wondergoal like Cantona & we hope he never changes 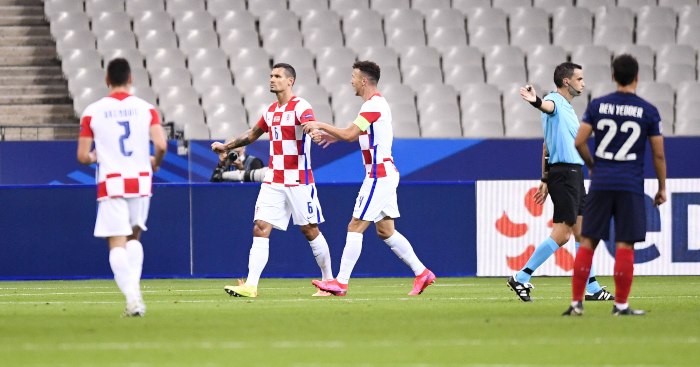 Liverpool fans will know all too well what it’s like to watch Dejan Lovren play centre-back.

Physically commanding? Check. Strong in the tackle? You bet. Bit too much of a headcase? Abso-fucking-lutely.

But would we really want to live in a world in which Lovren calmed things down and behaved like a proper, sensible centre-back? Does the world really need another Eric Dier? No.

It was that fire in Lovren’s belly that propelled him to the finals of the Champions League (where he was superb) and World Cup (where he wasn’t) in 2018. Equally, it was that same fire in his belly that made him look like an idiot for getting mugged off by a Shrewsbury Town substitute.

After Croatia were beaten 4-2 by France in the World Cup final two years ago, Lovren showed his performances reflect his personality by saying: “Sometimes, the criticism is unfair and people should respect me also. Without being arrogant I think I have [been proved to be one of the best defenders in the world]. Definitely.”

Without being arrogant, he probably is one of the best defenders in the world, relatively speaking in terms of the entire population of 7.8 billion people on the planet.

On Tuesday night, Lovren had the chance to prove his point against the same opposition as Croatia travelled to the Stade de France for a Nations League clash between the two countries.

The game was only 16 minutes old when Croatia’s corner was only partially cleared and looped towards Lovren at the back post. The obvious thing to do for a player of his attributes would be to attack the ball in the air and head it back across goal in the hope of any touch nudging it into the net.

Instead, Lovren did this:

Do we have a buy back clause for Dejan Lovren? 😂 pic.twitter.com/TYJezBSjGT

We can’t work out what’s more outrageous – the turn, the finish, or the Cantona-esque celebration as if this is what we should have expected all along.

But the more things change, the more they stay the same. Croatia were yet again beaten 4-2 by France. Lovren was reduced to a training cone while watching the ball passed around him for France’s first two goals and went missing at a corner as Dayot Upamecano headed in the hosts’ third.

Watching the highlights back almost makes us sad that we won’t be seeing Lovren in the Premier League in 2020-21, but for his eternal commitment to always providing good value, we can only salute him.