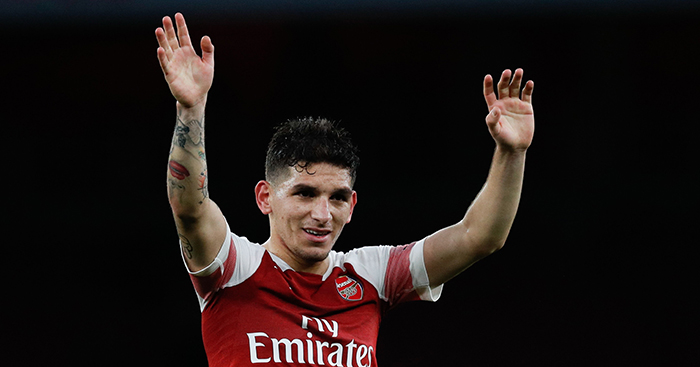 Arsenal new boy Lucas Torreira played a key role during his side’s 4-2 derby win over Tottenham on Sunday. Opponents should be worried.

Combined XIs can make you look silly, can’t they?

Just over a year ago, Daily Mail journo Adam Crafton found himself in the middle of a Twitter storm after picking an Arsenal-Tottenham XI containing only Spurs players.

The subsequent result — a 2-0 victory to Arsenal — saw Crafton torn to shreds.

But a year is a long time, and celebrated pundit Tim Sherwood has seemingly learned few lessons from the tea banter of 2017.

On Saturday, the former Tottenham favourite revealed his own combined Arsenal-Tottenham XI ahead of Sunday’s match. Surprise, surprise, it contained only Spurs men.

Nor, it seems, could Sherwood find room for Spurs’ actual starting XI. Instead, the tactics expert chose backup midfielder Harry Winks in the middle.

Watch #TheDebate now on Sky Sports PL and tweets your questions below. pic.twitter.com/78FCjDvrdI

There’s a difference, however, between Crafton’s misjudgement and Sherwood’s, in that Crafton was basically unlucky.

In the derby last November, the mercurial Özil — just as likely to disappear as he is to provide a sumptuous assist — put in one of his best performances. The Daily Mail journo just didn’t see it coming.

Sherwood can have no such excuse.

Over the start of the 2018-19 Premier League season, Unai Emery’s Arsenal have been improved by the addition of one of the best signings of the summer: Lucas Torreira

Arsenal’s new midfield enforcer has brought balance to the perpetually lopsided Arsenal side, and on Sunday the Uruguayan made Sherwood look very silly indeed.

Although it’s early days yet, Torreira’s performance against Tottenham suggests he could be key for Arsenal, finally filling the void left by Gilberto Silva a decade ago.

Arsenal and Emery deserve credit for signing their new man.

But perhaps not that much credit. After all, Arsenal’s central midfield problems have been glaringly obvious for a long time.

Since Gilberto’s exit in 2008, the club’s only defensive midfield recruits have been Mathieu Flamini (for the second time), Mohamed Elneny and the talented but indisciplined Granit Xhaka.

Torreira’s arrival may be exciting for Gunners fans, but lord is it overdue.

In fact, so desperate was the club’s need for a player like Torreira, the Uruguayan’s standout performance on Sunday might be taken with a pinch of salt.

The midfielder clearly possesses great attributes. He covers ground, makes tackles and interceptions and even popped up with a goal.

Arsenal keeper Bernd Leno called him “incredible”, a “fighter” and “so important for our game, for the whole defence”.

Emery says the midfielder adds “balance” to the side.

But his performance against Spurs does raise an important question: how many more victories might Arsenal have enjoyed over the last 10 years with any genuinely half-decent defensive midfielder in the team?

With any £26million signing instead of, say, Francis Coquelin? Without the likes of Aaron Ramsey, Mikel Arteta and Jack Wilshere being asked to perform defensive duties entirely beyond their abilities and interests?

Fortunately for Arsenal fans, none of those questions really matter now. What matters is whether midfielders like Torreira, Mattéo Guendouzi and the much-improved Xhaka can maintain their current form.

Those in and around the Emirates are quietly confident.

After the derby, Martin Keown called Torreira a “little dynamo”, praising his performance as the best he had seen since the days of Gilberto and Patrick Vieira.

It looks like there’s more to come, too. If Torreira is able to play like that in the north London derby (and just a few months into his Arsenal career), lesser opponents should be a walk in the park.

When Arsenal’s Invincibles won the Premier League in 2003-04, Gilberto was a relatively long-in-the-tooth 27.

So even if the Spurs match proves to be the highlight of Torreira’s season, he still has many years to improve.

Sadly, Arsenal’s Twitter celebrated Sunday’s win in less boisterous fashion than last year. There were the usual posts about the players’ performances, coupled with some very mild banter with Spurs fans.

It looks as though the club may have listened to Crafton’s complaints about the tea-sipping GIF.

Yet ANOTHER @premierleague man of the match award for @LTorreira34 🏆 pic.twitter.com/y0lqQ7IqLQ

But while Arsenal could easily have used the win to throw shade at Sherwood, maybe this more grown-up Arsenal is trying to do something different — both on and off the pitch.

For the latter years of the Wenger era, Arsenal had many players like Özil. Players who could — on a good day — put in a showstopping performance worthy of all manner of GIFs.

Trouble is, they were bottlers.

While classy players like Pierre-Emerick Aubameyang and Alexandre Lacazette wouldn’t look out of place sipping Earl Grey on your timeline, Torreira is something else altogether. He’s feisty, functional and, in all honesty, not as photogenic as Mesut Özil.

For too long Arsenal prioritised style over substance. But with ruthlessly efficient players like Torreira now running the show, opponents and Spurs-leaning pundits should be equally worried.

With Manchester United up next, it will be fascinating to see where the Uruguayan goes from here.