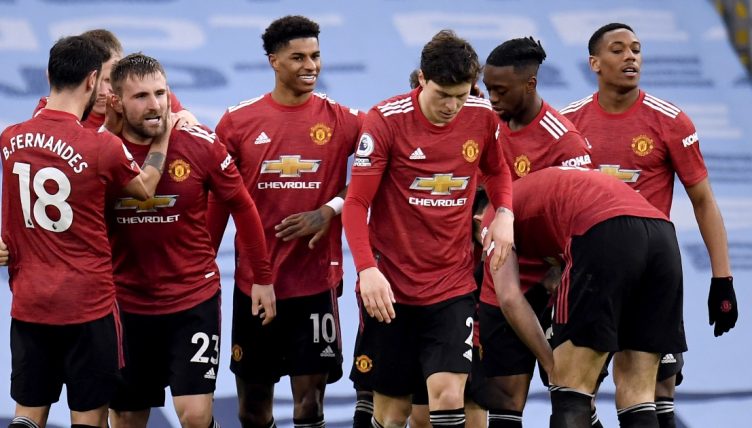 For all his qualities when on form, Manchester United‘s Luke Shaw rarely gets his name up in lights.

That was not the case in Sunday’s Manchester derby, having played a defining role in both elements of the surprise  2-0 scoreline.

Pep Guardiola should have known United would prove obdurate opposition to extending Manchester City’s run to 22 straight wins, given their record this season.

Indeed, Ole Gunnar Solskjaer’s side were the last side to stop his City juggernaut from scoring, shortly before they embarked on their record-breaking winning streak.

Shaw was arguably the man of the match on that fairly tepid occasion, as both sides left Old Trafford in December seemingly satisfied with a point. Guardiola made just one substitution, switching Riyad Mahrez for Ferran Torres, but neither could find a way past the left-back.

Much has been made of United’s record in the big games this season going into the match at the Etihad, failing to beat any of their fellow moneyed elite of the ‘big six’ and failing to score since Bruno Fernandes’ consolation penalty in the early-season 6-1 mauling at home to Tottenham.

But for all the chatter around the bore draws and lack of spectacle, Solskjaer’s side have been remarkably solid when it comes to shutting down the league’s best attackers. Since the Spurs defeat, United have conceded just one goal – a Pierre-Emerick Aubameyang penalty – in seven games against the ‘big six’.

And Shaw has played in all of them, shutting out the likes of Callum Hudson-Odoi, Hakim Ziyech, Mohamed Salah and Nicolas Pepe.

In Shaw v Mahrez round two, City’s nimble-footed Algeria international looked determined to get the better of the United left-back. Just before the half-hour mark, Mahrez twisted Shaw inside out, and from the moment he fell to his knees it was destined to be clipped and shared across social media.

Why did Mahrez make Shaw propose on his knees like that? 😭😭😭😭 #MCIMUN pic.twitter.com/ZDQKC0al5H

But while those watching spent time captioning it with the requisite skull emojis, Shaw was still out on the pitch, diligently sticking his task, making sure that such moments weren’t to be repeated.

On a day when he threatened to become a meme himself, by full-time the most apt to describe Shaw’s performance was Michael Jordan’s “…And I took that personally”, which is to say he kept Mahrez in his pocket for the remainder.

City’s full-backs might often resemble playmakers, striding forward to provide extra options as they look to pass through the opposition, but there’s also something to be said for the more decidedly old-school pairing of Shaw and Aaron Wan-Bissaka; two players that seem to revel, first and foremost, in getting their knees muddy. 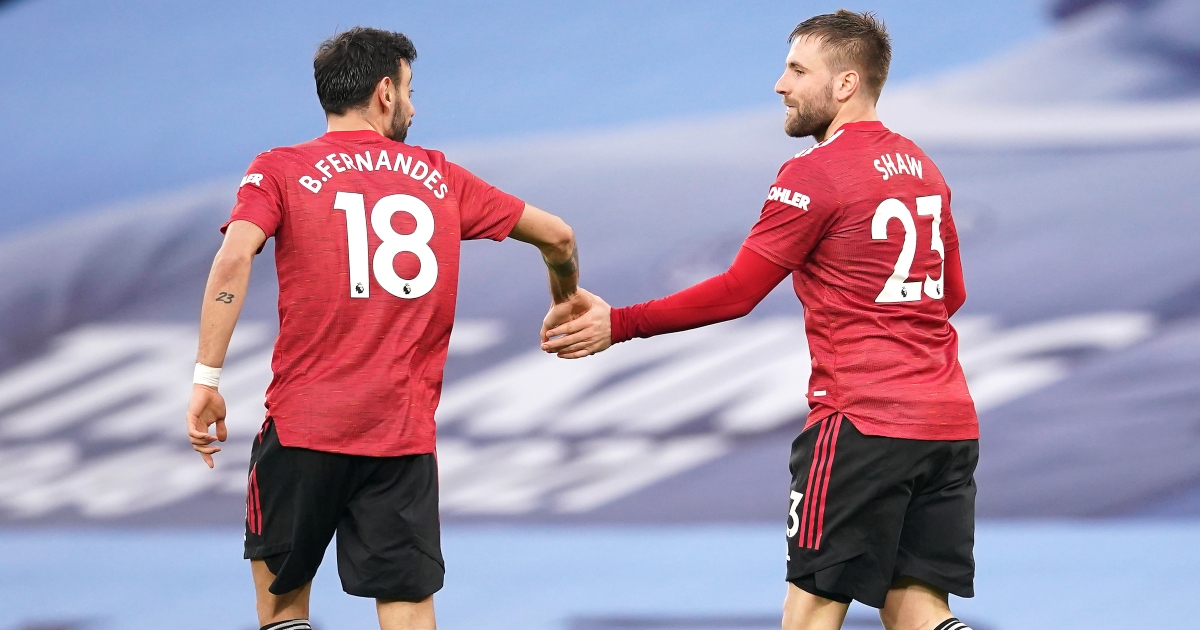 That’s not to say that they can’t offer anything going forward. Shaw, in particular, is fast-improving in that department.

He’s registered five Premier League assists this season – three more than Joao Cancelo, for what it’s worth – which is nearly as many as the seven in total he’s managed in his previous eight Premier League campaigns.

In receiving Dean Henderson’s throw, chesting it down before skipping past Cancelo and laying it off to Marcus Rashford before intelligently dropping back into a pocket of space to receive it again, he resembled a prolific goalscoring full-back a la Marcelo or Roberto Carlos. He finished assuredly like a natural, too.

The surprise in Martin Tyler’s voice as he exclaimed, “Goodness me, it’s Luke Shaw!” said it all. This is a player that had scored just once in his first 179 Premier League appearances, after all, with United’s first and only goal from open play against the ‘big six’ this season.

Having doubled his side’s lead, Shaw’s attention turned very much back to protecting it once again. Mahrez was still there, still trying his luck, but there was no way through.

Just before the hour mark, the winger spotted a rare opportunity, knocking it past Shaw, ready to skip into the wide open space.

The United defender stepped across, like a seasoned take-no-shit bouncer denying a 17-year-old with the fearlessness that comes with a well-laminated fake ID.

He received a booking for his trouble, but he toed the line from there, while City couldn’t do anything with the resulting free-kick. He’d also sent Mahrez a message: Not Again.

Unlike at Old Trafford, Mahrez stayed on for the whole 90 minutes, but once again Guardiola made a change on the right flank, tinkering as once again he tried to find a solution to The Shaw Problem.

Kyle Walker stepped on in place of Cancelo, but he too was unable to make anything happen.

Twice this season, Shaw has been flawless defensively against the most outstanding side in the country. And if he can keep getting imbued by the spirit of Roberto Carlos going forward, there’s no telling where he can go from here.