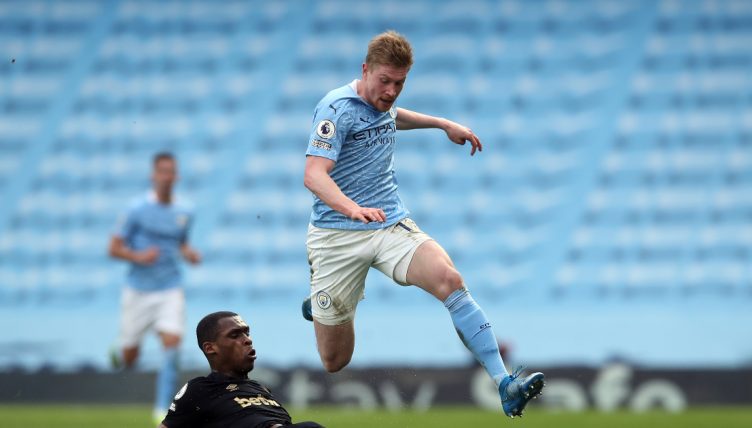 ‘Are Manchester City better without Kevin De Bruyne?’ many of you foolishly pondered as Pep Guardiola’s side slotted in a third against Tottenham two weeks ago.

The final score read 3-0 to the home side. It was City’s fifth win in a row without last season’s Player of the Year,  sidelined with a hamstring injury.

So the question was posed: are City better without him? 15 goals had been scored across those five games after all, including seven across clashes with Liverpool and Spurs.

Ilkay Gundogan found the net six times in that period – double what De Bruyne had managed all season – so perhaps the question was valid.

Against West Ham, as De Bruyne made his second start since returning from injury, the Belgian showed everyone who had made the claim just how utterly silly they had been with one glorious swing of his left foot.

West Ham arrived at the Etihad knowing that they were not the same side who had been humbled so frequently by their hosts in previous clashes.

The Hammers, led by David Moyes and what is starting to seem more and more like a Freaky Friday body-switch with Jurgen Klopp, are flying, sat in fourth-place as the weekend’s action got underway.

City treated them with the caution they deserved in the early exchanges too, wary of how the red-hot partnership of Jesse Lingard and Michail Antonio could harm them on the break.

Eventually, and perhaps a little bit bored, De Bruyne took matters into his own hands. Receiving the ball just to the right of the visitor’s penalty area, he took one lookup, assessed the situation like a ginger Robocop, and sent a lofted cross into the box with a crisp swish of his left boot.

What a ball that is from Kevin De Bruyne! 🎯

Rúben Dias has his first Man City goal and the home side lead West Ham 👊 pic.twitter.com/IITOyK2UHh

As the ball took flight, time seemed to stand still. As the ball travelled well beyond the point where physicists would probably tell you it should have started to dip, thousands of years of scientific research seemed to be tossed on the bonfire.

Below, Ruben Dias waited. A revelation in defence for City, the Portugal international was still yet to score for his new club, but as soon as the ball left – what has laughably been dubbed – De Bruyne’s weak foot, he will have known that was about to change.

Issa Diop was nowhere to be seen, seemingly transfixed by the cross as if it were a hypnotist’s watch, but he was rudely brought back into the room by the sound of Dias’ header rippling the back of the net.

When children play football, they are often told to not just stand around admiring their passes.

But what can you do when you are De Bruyne? When the ball left his foot, he took a couple of side-steps to get a better view, as a painter steps away to admire their creation. It is hard to think of a left-footed player in the top-flight who could deliver such a perfect cross.

So are Manchester City better without De Bruyne? If the absence of a player results in the absence of such moments of artistry, how can that possibly be true?