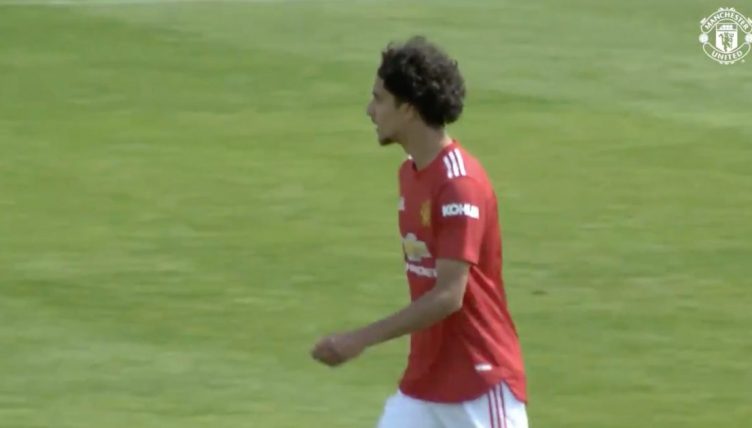 Playing for Manchester United’s academy is guaranteed to bring pressure but teenage prospect Zidane Iqbal also has another challenge.

Born in Manchester four days after namesake Zinedine Zidane had helped Real Madrid knock United out of the Champions League at Old Trafford, Iqbal certainly had a lot to live up to with that forename.

By that point, the current Madrid boss had already won two Serie A titles, two Champions Leagues, the World Cup, a European Championship and the Ballon d’Or.

“Give me 10 pieces of wood and Zinedine Zidane and I’ll win the Champions League,” former United boss Sir Alex Ferguson famously once said.

So you have to be a pretty good player if you’re called Zidane, but Iqbal has the natural talent to do the legendary name justice.

Progressing through the ranks of United’s prestigious academy, Iqbal signed a two-year scholarship with the club in 2019.

Just like his namesake, Iqbal is an attacking midfielder by trade and is more than happy to showcase his incredible skill set.

Zidane: Favourite skill move is that one in the video but I don’t do it often😂 pic.twitter.com/zSAdCVxOpl

While some players like to keep things simple, the Mancunian is a natural risk-taker and can produce moments of magic that can unlock the best defences.

His creative flair and ability to pick out a pass through the eye of a needle has unsurprisingly led to more comparisons between him and Zidane.

“I hope to be as good as Zinedine Zidane one day, but they are really high standards to live up to, but hopefully I reach them,” Iqbal said in December 2019.

The playmaker made his Under-18s debut at the age of 16 in November 2019 and opened his account at that level a few weeks later.

During a 4-0 win over Sunderland Under-18s, he displayed some intricate footwork on the edge of the area and sent two defenders to the shops before cooly placing the ball into the bottom corner.

Great to see that the exceptionally named Zidane Iqbal can play a bit pic.twitter.com/bRH0u9q07P

Refusing to rest on his laurels, Iqbal continued to terrorise the Sunderland defence in the second half and nearly scored another sensational goal.

The midfielder skipped past his marker with an exquisite turn and then fired towards goal, only to see his effort bounce back off the crossbar.

Injuries have halted his progress in 2021, but he marked his return to the side by coming off the bench to score in a 3-2 defeat to Newcastle United Under-18s earlier this month.

The teenager made his first start since December 2020 in United’s 5-1 win against Wolves and delivered a timely reminder of his abilities.

Despite being surrounded by other talented players like Charlie McNeill and Isak Hansen-Aaroen, Iqbal was the standout performer and looked like the next big thing.

After McNeill opened the scoring with his 19th goal of the season, Iqbal doubled their lead in the 31st minute with a shot from the edge of the area that took a slight deflection before nestling in the net.

While there was an element of luck surrounding his first goal, his second strike of the game was so good it would make his namesake blush.

Iqbal intercepted a loose ball in the middle of the park and went on a brilliant solo run, dancing through a sea of gold shirts before drilling his effort into the far corner.

He’s now scored five goals in just eight Under-18 Premier League starts this season. Even Bruno Fernandes would be proud of that goal return.

The Champions League might be out of reach for now but United could probably win the Under-18 Premier League with 10 pieces of wood and a fully-fit Iqbal.

Neil Ryan's side produce an emphatic response to last weekend's defeat, with Charlie McNeill (2), Zidane Iqbal (2) and Dillon Hoogewerf all on the scoresheet for United. pic.twitter.com/pnNADpC387

Following in the footsteps of Hannibal Mejbri, Shola Shoretire and Anthony Elanga, Iqbal has now become the latest youngster to pen professional terms with United.

Despite only just turning 18, he is reportedly set to be fast-tracked into the Under-23s before the end of the current campaign, which will undoubtedly aid his development.

Should he excel at this level, there is certainly a possibility of him getting some first-team minutes under Ole Gunnar Solskjaer in the near future.

There is currently a startling lack of British Asians in the Premier League, but Iqbal has the talent required to become a role model for a whole community.

If he replicates his stunning goals in United’s senior side, it might eventually be Iqbal and not Zinedine that springs to mind when someone mentions Zidane.

This piece was originally published in April 2021.