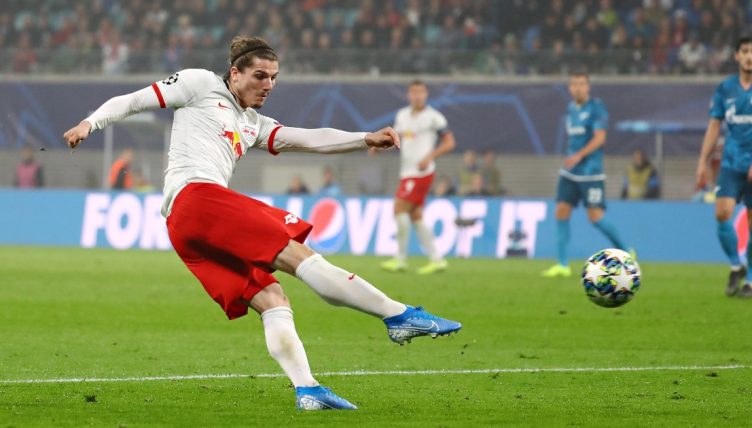 Marcel Sabitzer will reportedly be the next RB Leipzig star to leave for greener pastures, with Liverpool and Manchester United said to be at the front of the queue for his signature.

The Austria international is approaching the final year of his contract and says he “can imagine” playing in the Premier League next term. He’s been touted to follow in the footsteps of Naby Keita, Timo Werner and Dayot Upamecano in making the switch to one of Europe’s glamour clubs.

Tottenham know all about Sabitzer’s talents, after he scored twice in Leipzig’s 4-0 aggregate Champions League victory over them last year, and are also said to be eyeing him up.

You’d imagine that making such a contribution on the biggest stage will have factored into Liverpool and United’s consideration.

There will also no doubt be the most comprehensive data-based scouting analysis, with everything from his shots at goal and chances created to deep completions, pressures and what percentile he ranks in terms of packing.

That’s all well and good, but no 1000-page scouting report can whet the appetite quite like this five-second clip of Sabitzer hitting one of the most aesthetically pleasing strikes in Champions League history.

Marcel Sabitzer's stunner vs Zenit just gets better and better with every angle 🙏pic.twitter.com/liq2xgbv2q

Voted the best goal of the Champions League group stage in 2019-20, his half-volley against Zenit was a thing of pure beauty.

It’s the kind of goal you want to watch back, pausing frame by frame, as if you’re a 13-year-old with a dubious 15-certificate VHS (Gen Z, ask your parents).

Chesting the ball down 15 yards out, the Zenit defence afforded him the time and space to allow the ball to bounce once while setting himself to catch it on the volley. Big mistake.

Sabitzer couldn’t have caught it sweeter, sending it right into the top corner as if it were guided by a laser.

Bayern Munich probably put more thought into signing Benjamin Pavard than his perfect goal in the 2018 World Cup, but you can’t blame them if it was literally all that factored into their decision. Sabitzer’s strike against Zenit can be filed in that kind of category.

The 27-year-old attacking midfielder isn’t the most prolific goalscorer, having never hit double figures in six Bundesliga campaigns with Leipzig, but when he does score they tend to be spectacular.

Manchester United know all too well the danger of scouting a player from a few standout clips, but we’re willing to bet when Bebe was playing in the lower leagues of Portuguese football he never did anything nearly this good.

Meanwhile, Liverpool might have second thoughts after their last couple of signings from the Red Bull empire have failed to set things alight at Anfield.

Who cares about cautionary tales when it comes to a player that can score goals like that?