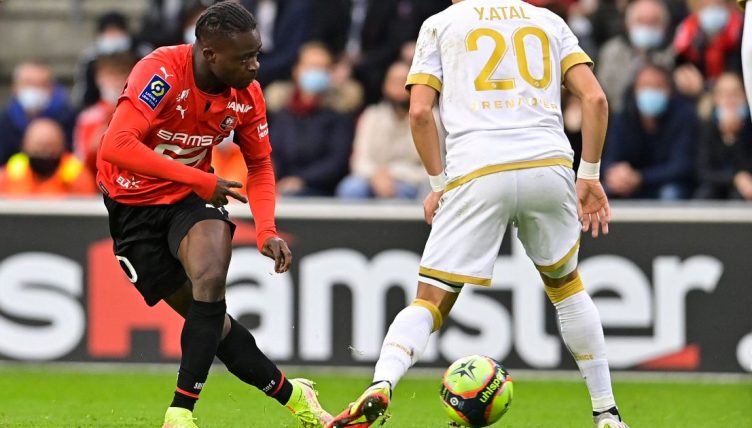 When a footballer player comes face-to-face with the goalkeeper, there are several different options available. The blast, the dink, the lob, the nutmeg and the perfectly placed shot into the corner.

All have a time and place, all can be effective if executed correctly.

None, though, are as noble as the last option: rounding the ‘keeper. It is football’s finest art. It is a move for a select few because it requires a player to have skill, silken touch, perfect spatial awareness, and balance. Most of all, to perform it correctly, they need to have ice running through their veins.

If it doesn’t come off, the player who’s tried it looks very silly indeed – so much so, that many have now abandoned it for more statistically effective methods of finishing one-on-ones.

But when it does come off, there are few better things to watch. The sidestep, the goalkeeper on their backside, the ball effortlessly tucked in the back of the empty net. And Manchester United target Kamaldeen Sulemana, it seems, is looking to revive the art.

Back when he was playing in Demark for Nordsjaelland, Sulemana made a good start to the 2020-21 league season, scoring four in 12 in the lead up to the winter break.

And when Norsjaelland returned to action, the 19-year-old Ghana international showed every sign that he was ready to pick back up where he’d left off.

Just before half-time in a post-Christmas friendly against Helsingor, Sulemana received a bullet through-ball at waist height. No worry. He used the pace on the ball to flick it up, over and past his marker, and he was through.

The next touch was vital. Most would have chosen to shoot immediately, but not this young man.

He stared into the whites of the goalkeeper’s eyes, knew he had his number, gave a little shimmy to the left and poked it to his right. Sulemana was in and the ‘keeper lay helpless on the frozen ground. It was clearly enough to get the scouts looking in his direction.

Ghanaian wonderkid Kamaldeen Sulemana had seven goal contributions in the first half of the Danish Superliga season for FC Nordsjaelland.

If the first post-winter break friendly is anything to go by, the 18-year-old winger is far from finished 🎉 #NxGnpic.twitter.com/qQXXUCDxwu

That should, by all rights, have been the start of a brilliant start to the second half of the season. Unfortunately for young Sulemana, his form dropped off a little in February and March 2021.

At the business end of the campaign, however, when things got serious, he started performing once more. Sulemana got six goals and an assist in his last nine games of the campaign. And how did he start off that brilliant run? By sitting a ‘keeper on his backside, of course.

As the Danish season entered the play-off stage in April, Nordsjaelland faced AGF and when the ball broke on the counter in the 17th minute, Sulemana was ready.

He darted onto a through-ball, surged past his nearest marker, looked the ‘keeper in the eyes once more and repeated the trick. A shimmy to the left, a touch to the right, a goalkeeper prostrate and a tap-in to top off a lethal break.

That form earned him a move to Rennes in summer 2021 and he has been lighting up Ligue 1, showing he has plenty more strings to his bow. Sulemana loves a trick, can assist and can cut in and curl shots into the corner, as he did on his Rennes debut.

And nutmegs? Well, yeah, since you ask.

In October, Rennes played Metz and with Rennes already 1-0 up, Sulemana decided to twist the knife with a goal that left his marker searching for his soul and the ‘keeper stunned.

Sulemana got the ball on the right side of the box after drifting out from the centre, got the ball and stared deep into the eyes of the man trying to stop him.

The poor defender had no chance. One moment, Sulemana was still in front of him, the next the ball had been slipped through his legs and Sulemana was away, into the box and toe punting a magnificent finish over the ‘keeper at the near post.

🇬🇭Ghana Black Stars’ Kamaldeen Sulemana is proving unstoppable in Ligue 1 this season,scoring this wonderful solo goal against Metz over the weekend. #Ligue1|#Rennes pic.twitter.com/uVABuNJEKs

So skillful is Sulemana that Nordsjaelland coach Flemming Pedersen told TV3 Sport: “We are talking about a player with potential on a par with Neymar, and maybe even more than that because he is even faster.”

But the options he takes when one-on-one with goalkeepers mean that comparisons to another Brazilian would be just as apt. His skillful feet are reminiscent of the PSG man’s, but his choices of finish are more Ronaldo Fenomeno than Neymar.

That lighting speed and ability to counter-attack would make him a fine fit for Ralf Rangnick’s plans to create a super-nimble Manchester United attack. But United could have competition from Liverpool if they are looking to bring the young Ghanaian in.

Either way, we don’t mind. Rounding the ‘keeper and the nutmeg are two fine footballing art forms. So long as Sulemana brings them with him to the Premier League, we have one thing to say: yes please.