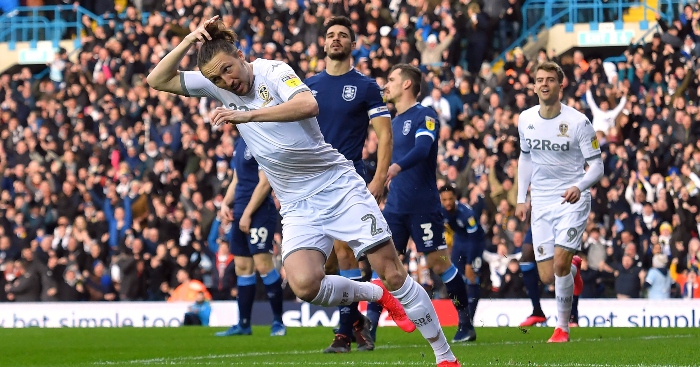 It had the potential to be a very long afternoon at Elland Road when an enthusiastic young supporter stood next to me in the Kop and, brimming with the faux-aggro that comes with being at the opposite end of the stadium to the visiting fans, began to screech in a surprisingly high-pitched voice “you f*cking c*nt” at anyone and everyone associated with Huddersfield Town.

The atmosphere was made only more awkward around two minutes into the game when chants of Kiko Casilla’s name began to gain traction. At this point my friend and I shared an uncomfortable glance, prompting the young fan next to us to apologise for his own behaviour.

Don’t worry, mate, we had to explain, we’re just not particularly into singing the name of a guy just found guilty of racist abuse. Our new friend encouragingly agreed. And then we looked back up at the pitch and saw Jack Harrison dribble down the left wing and cross to the back post to an on-rushing Luke Ayling.

What happened next I can only describe because I spent my entire Sunday watching it back. Ayling – and it’s worth emphasising at this point he is a right-back who once went just shy of four years without scoring – flew through the air, both feet of the ground, and crashed a volley through Town goalkeeper Jonas Lossl and into the back of the net off the underside of the crossbar.

Rather than lift off his mask to reveal Marcelo Bielsa had sent out Tony Yeboah in the No.2 shirt (Yeboah would struggle to hit Bielsa’s body fat targets these days), Ayling ran to the touchline, took out his bobble, and relished the adoration of Elland Road all the while looking like a Roman god.

😍 This shouldn’t be allowed before the 9pm watershed! pic.twitter.com/eImXiSlzNU

Back in the Kop, bodies were scattered around like a bomb had gone off. Even on Monday, I’m discovering new cuts and bruises on my legs after being caught up in a wave of fans toing and froing into the backs of seats and all over each other.

After the goal it was noticeable that there were no more chants for Casilla, as if Ayling’s strike reminded fans their support should be directed towards the players fighting on the pitch to drag Leeds to a long-awaited promotion.

And it was only fitting Ayling was the player to deliver the message. Throughout the ups and downs of the 2019-20 season to date, the 28-year-old has often been the one to stand up and show the rest of Leeds’ team the way forward.

In the aftermath of the defeat at Nottingham Forest that left Leeds teetering on the brink of Falling Apart Again, he appeared crestfallen in an interview with the club’s official website, bemoaning the side’s inability to score the first goal in games and compounding that with soft concessions.

But rather than blame others, he’s taken it upon himself to fix those problems, forming part of a defence that has kept five consecutive clean sheets while scoring the opening goal himself in three of those five wins.

The goals have been an added bonus, especially in such spectacular fashion as against Huddersfield, but even that was no fluke: he scored almost the exact same goal in training the day before the game.

“It just came across and I just thought, ‘Sod it, I’m going to smash it!'” Ayling told the club’s official website after the local derby victory, belying what might actually be a hidden talent given he also smashed home a dipping half-volley in the win over Birmingham earlier in the season.

Leeds now top the Championship and have a seven-point buffer to third place, but if their recent history tells us anything, it’s that there are sure to be more fraught moments on the horizon.

But as long as they’ve got Luke Ayling in the side, the good vibes should continue.