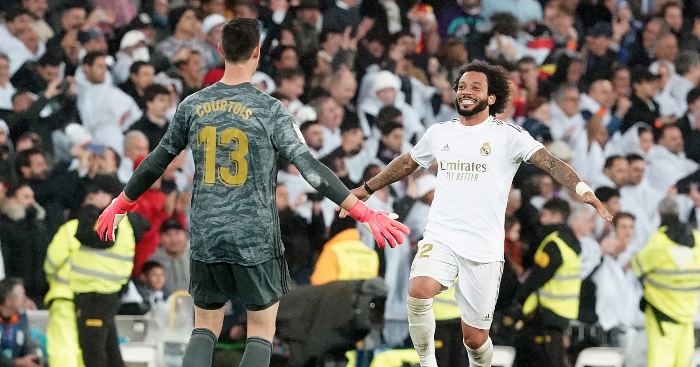 In his 13 years at Real Madrid, Marcelo has had plenty of time to figure out how to stop Lionel Messi. Now, finally, he looks to have cracked it.

The two South Americans have gone toe-to-toe more times than we can count since 2007, but it’s fair to say Messi has aged better on the pitch.

Marcelo has been used a little more sparingly this season, recently sitting out the Champions League defeat at home to Manchester City, but he returned with a vengeance in the latest Clasico.

Neither of Spain’s most storied clubs have been at their best this season, and this was reflected in the relative lack of buzz around the fixture.

However, while other players might have been off the pace, that accusation can’t be levelled at Messi.

He has more goals and more assists than any other player in La Liga this season, by a fair distance, too, and it’s reasonable to think any close game – even against Real Madrid – will inevitably be decided by him without anyone else being able to intervene.

Marcelo wasn’t convinced, though. Just as the Argentine looked ready to do what he always does in these situations, Los Blancos’ left-back decided things would go down a little differently.

When you’re a player with Marcelo’s role, you don’t get many opportunities to celebrate goals.

The defender has one goal in 19 appearances this season and, if he wants to keep in line with the return seen across his career, he’ll chip in with one or maybe two more before May.

In any given game, a goal-saving challenge is far more likely than an intervention at the other end of the pitch.

That’s not to underplay his contribution against Barcelona, though. This is still Messi we’re dealing with, and Marcelo is still an underdog. For him to celebrate in the manner others might mark a last-minute winner? That isn’t just understandable; the more we see the incident, the more we realise it is the only logical response.

This wasn’t just a random moment in a game, after all.

Vinicius Junior had given the hosts a 1-0 lead just a couple of minutes earlier, pushing Real Madrid above their great rivals at the top of the table.

It wasn’t just a case of stopping a goal, but rather of stopping Messi doing what he always does. It was Marcelo watching Messi respond to his team-mates failing him by doing the hard work himself, but deciding that actually, as it turns out, this isn’t the inevitability it has often presented itself as.

Marcelo wasn’t just preventing a goal, he was stopping the idea that football’s script is pre-written. The celebration that follows isn’t just “I did it!” but also “Oh shit, it was actually possible!”

Marcelo turns 32 in May. He has won everything there is to win at a club level, and there aren’t too many worlds left to conquer.

And yet, even at the very top, a player can take pride in winning a battle which has seen him come out on the losing side time after time in the past.

Marcelo celebrated an intervention in his latest Clasico with all the vigour of a man playing in the fixture for the first time. For some, that attitude never goes away.