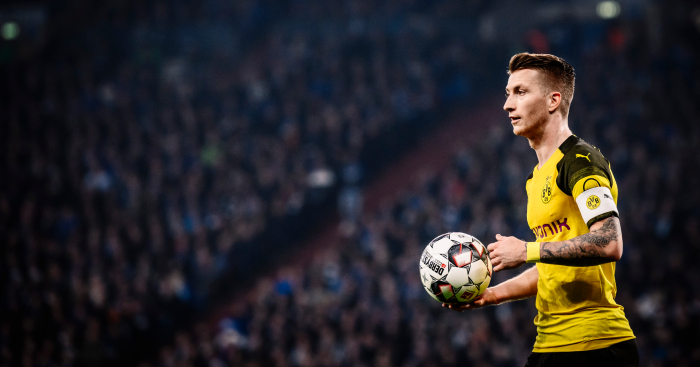 Borussia Dortmund are nine points clear at the top of the Bundesliga, and a reborn Marco Reus is playing a massive part in the club’s success.

As an outsider to German football, it’s easy to buy into the narrative surrounding Borussia Dortmund and Bayern Munich.

In this narrative, Dortmund are the honourable underdogs, a salt-of-the-earth club built on the buoyant support of its fanbase, while Bayern are the soulless mega-rich whose main purpose is to prise away Dortmund’s star players.

More than that, Bayern’s six consecutive Bundesliga wins — and a consequent lack of drama in the league — have strengthened antipathy towards a team that doesn’t seem to be playing fair.

There’s an element of truth to it, of course.

Bayern are rich, do have a monopoly on the league and have made a habit of taking Dortmund’s best players. Given those things, it’s easy to root for the team in yellow.

Feel sorry for Dortmund. Keep developing players. Keep buying players for a decent fee. And then Bayern (and others) take them away

But the extent to which Dortmund are portrayed as underdogs is, understandably, a bit stretched.

Dortmund are, according to Forbes, the 12th most valuable club in the world, richer than the likes of Atlético Madrid, Roma and both Milan clubs. Bayern are the fourth most valuable. There’s a big financial gap, but it’s smaller than, for example, the one that separates Real Madrid and Atlético.

In other words, this is less David versus Goliath, more Goliath versus a marginally shorter Goliath who is wearing a better jersey.

Fortunately, football isn’t about bank balances or Forbes. It’s about narratives, and the Dortmund-Bayern rivalry has the right amount of spice to make it compelling and the right amount of low-level injustice to serve its goodies-versus-baddies storyline.

Is Mats Hummels a terrible person? Almost certainly not. Did Robert Lewandowski sell his soul when moving to Bayern? No, he probably just wanted a new challenge.

But football isn’t wrestling, and its narratives are not written by CEOs. They have to be created by the fans.

You love Dortmund because they tick just enough boxes in the ‘hero’ column, while Bayern — player-thieving, title-walking Bayern — make a very good villain.

Only this time there’s a twist: Dortmund are winning.

With two games until the halfway stage of the season, BVB are nine points clear of both Bayern and Borussia Mönchengladbach. They’re also unbeaten.

For the first time in a long time, Dortmund aren’t playing the role of honourable losers; they’re playing brilliant football, possess a potent mix of youth and experience and are now in a great position to claim their first title since 2012.

A few standout players have helped Dortmund get where they are.

The emergence of Jadon Sancho as a top-class winger has been mouth-watering for English fans, while the preposterous strike rate of Paco Alcácer — currently a goal every 40 minutes — could enter the record books.

There’s also the small matter of Axel Witsel, who could turn out to be the signing of the season.

On feel-good factor alone, however, nobody’s performances have been quite as satisfying as those of Marco Reus.

For years, Reus has seemed like German football’s nearly man.

After being named the country’s Footballer of the Year in 2012, the forward moved to Dortmund, who had just won their second consecutive title. But his first season resulted in second-place finishes in both the Bundesliga and Champions League.

Bayern have since dominated the domestic picture, while their Der Klassiker rivals have — until now — struggled to find a post-Klopp identity.

In fact, Dortmund’s only major trophy in the Reus era has been the 2017 German Cup. And the final was hardly the attacker’s finest moment: Thomas Tuchel subbed him off at half-time.

At international level, too, Reus has been playing under something of a curse.

He missed Germany’s 2014 World Cup victory with injury, and another knock prevented him playing at Euro 2016. Only this year, at the age of 29, did he finally make his World Cup bow.

It wasn’t much of a celebration: Germany’s performance in the competition was their worst in 80 years.

Over the last few seasons, persistent leg injuries have threatened to send Reus to early retirement.

The attacker made just 17 league appearances in 2016-17 and just 11 last season. Even with the small redemption of a World Cup appearance this summer, he looked to be becoming a bit-part player, not fit enough to be considered the lynchpin of the Dortmund team.

Not that there was anything too troubling about that: with the likes of Sancho and Christian Pulisic providing new energy in attack, removing the reliance on Reus seemed like a reasonable concession, not a tragedy to mourn.

So what the hell happened this season?

After 15 games, captain Reus has played more minutes than any other Dortmund player. He has five assists and 10 goals, putting him just one behind the Bundesliga’s top scorer, team-mate Alcácer.

If he continues at this rate, Reus will finish the season with something like 23 goals. To date, he has never scored more than 18.

Marco Reus has won the Bundesliga Player of the Month award for November, making it a clean sweep for Borussia Dortmund so far this season. #BVB #FIFA19 pic.twitter.com/4sS9CTv4Lq

Reus put in another masterclass in Dortmund’s 2-1 win over Werder Bremen at the weekend. One of his opponents in that game, former BVB midfielder Nuri Sahin, was full of praise for his old colleague.

Never mind the mixed metaphor, Sahin was speaking the truth: after years playing predominantly on the wing, Reus seems to have found a home in the number 10 position. And with the likes of Sancho delivering the goods out wide, he looks set to stay there.

Ultimately, the rebirth of Marco Reus is the perfect subplot to Dortmund’s resurgence.

Within the narrative of Dortmund facing all forms of adversity, an injury-prone forward finding the form of his life as he approaches 30 is almost too good to be true.