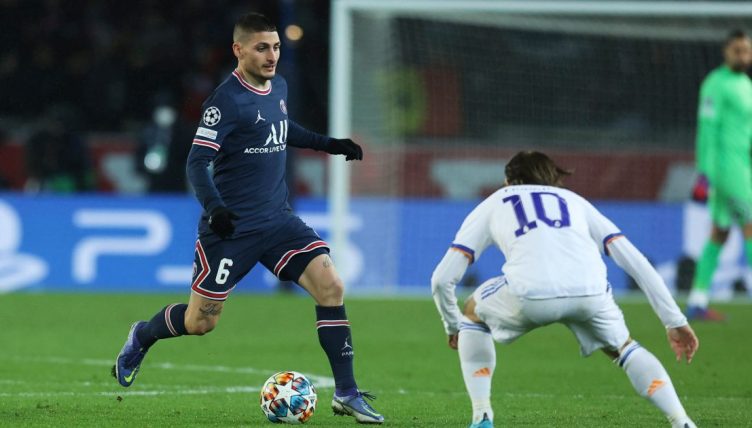 Footballers praising their team-mates in interviews is to be expected.

You’d keep your answer civil. You might even offer some faint praise in a vain attempt to build team morale. ‘They make a t’riffic cuppa,’ you might say. ‘Never wastes their time and mine offering that herbal muck. Always puts just the right amount of milk in.’

But there’s praise and there’s praise. And when Neymar was asked about his team-mate Marco Verratti after Paris Saint-Germain beat Real Madrid 1-0 in the first leg of their Champions League tie on Tuesday night at the Parc des Princes, he went for the nuclear option.

“I knew Verratti was an excellent player, but I didn’t realise he was so spectacular,” Neymar said after the match. “He’s a genius. He’s one of the best midfielders I’ve played with, along with Xavi Hernandez and Iniesta.”

But Neymar was not overdoing it for the cameras, not trying to build up his mate in front of the clamouring media types assembled ahead. Verratti did not need a confidence boost. It was just a statement of fact. Verratti is a genius, and he’d just given us all a 90-minute demonstration to prove it.

🗣️ Neymar: "I knew Verratti was an excellent player, but I didn't realise he was so spectacular. A genius. He's one of the best midfielders I've played with, along with Xavi Hernández and Iniesta."#UCL pic.twitter.com/6M8Zcrd4n5

Up against midfield three of Casemiro, Toni Kroos and Luka Modric – three of the greats of the modern era, who have helped Madrid to four European Cups – Verratti had stolen the show.

His manager Mauricio Pochettino may have written the sheet music and set the tone, but Verratti had been the piece’s conductor, the tempo on the pitch dictated by the tap-tap-tapping of his right boot.

PSG controlled things from start to finish, keeping the ball and corralling Madrid back towards their own penalty area. The French league leaders had 21 shots to Madrid’s three, made 182 accurate passes more than their visitors, and enjoyed 57% possession. Verratti was at the centre of it all.

Late in the second half, the little Italian provided a moment that summed up all of his omnipresent influence. It was not his most incisive moment, it did not immedaitely create a chance on goal. But it embodied the combination of gritty determination and impish brilliance in possession that make him such a midfield marvel.

A long pass dropped from the wet Parisian sky, bounced off the gelled hair of Kroos and ran on towards Madrid left-back Ferland Mendy. Verratti, despite having covered every part of the pitch thrice by that point, gamely scampered after it.

He won it once, but saw it bounce in the air. Then he turned, used his body to shield possession and took it down on his chest. As he did, three white shirts surrounded him.

Yet with a little flick of the outside of his right boot, he lifted it up and over Kroos and straight into the path of Kylian Mbappe. A bouncing loose ball had been gracefully transformed into another PSG attack.

As Madrid’s players had been discovering repeatedly for over an hour by this point, there is little point in pressing Verratti. He looks at advancing adversaries as cats look at mice; prey to be played with rather than serious threats.

At the death, Mbappe plastered his name on the back pages by nipping between two defenders and slipping the ball under Thibaut Courtois. It was a goal that had it all: skill, drama and a beautiful narrative.

But this game belonged to Verratti. By the end, he had touched the ball 123 times, made six key passes, completed all three of his attempted dribbles, won eight of thirteen duels and recovered the ball nine times.

In an interview with L’Equipe earlier this month, Achraf Hakimi made comments similar to those that came from Neymar after the game, saying: “The player that surprised me the most is Verratti.

“He is always calm even when is under pressure. He asks for the ball and it’s impossible to take the ball off his feet. The quality of those up front is evident, but seeing Verratti in training is enjoyable.”

The question, perhaps, is why Neymar and Hakimi were surprised. It’s not like Verratti hasn’t been doing this for a while.

He is loved by PSG and Italy fans and adored by his team-mates and coaches, but Verratti has often flown just a fraction under the radar of a wider public.

He is happy to quietly manage games while the likes of Neymar and Mbappe hog the limelight with more spectacular moments that make better bitesize social media content.

Now though, with his performances at Euro 2021 and displays like this in the Champions League, Verratti is starting to get the attention his genius deserves.

With just a 1-0 lead, PSG have a tough assignment coming up at the Bernabeu. But with Verratti in this form, Madrid might not be able to get the ball off them to score the goal they need.