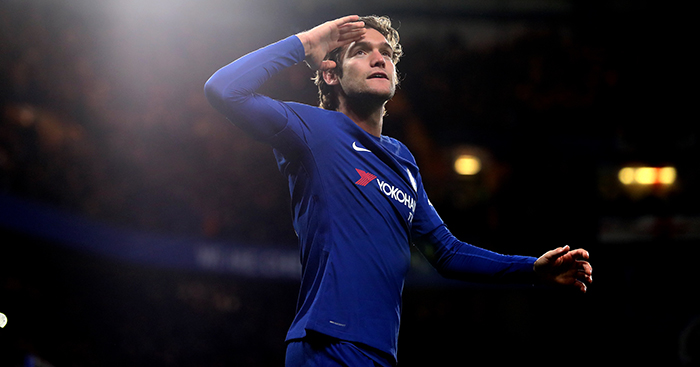 The names confirm the obvious: to get goals from defence in this league, you need dead-ball situations.

Chelsea’s Marcos Alonso, a player who could someday climb to the top of that list, is no exception.

He’s a free-kick master, following in the footsteps of many of the league’s most beloved No.3s (Leighton Baines, Ian Harte and Dennis Irwin spring to mind) and has used that skill to register a goal every 5.5 games at Chelsea. Fernando Torres had a rate of one in 4.5.

But despite his growing portfolio of sumptuous free-kicks, Alonso is hardly dependent on them. His dozen league goals for Chelsea also include several from open play, including left-footers, right-footers, and headers.

He’s essentially the complete forward, who just so happens to be a defender. And it’s this ability to conjure goals from anywhere that makes Alonso so likeable. It’s always fun to see him score.

Just think how different this makes him to John Terry, the highest-scoring defender in Premier League history.

Of Terry’s 41 league goals for Chelsea, most were variants on the six-yard header. And because of their unsophisticated nature, few of those goals were appreciated by anyone outside of West London.

In this sense, Terry shows why goalscoring full-backs like Alonso are so much more precious than goalscoring centre-backs.

Since they’re rarely forward for indirect set pieces (unless they’re 6’2…like, er, Marcos Alonso), full-backs tend to get more interesting goals: a long-range strike, a flukily overhit cross, or — very occasionally — the finishing touch on a spectacular team move.

From Alberto to Alonso

Perhaps the best example of a great full-back’s goal is a goal frequently referred to as the greatest ever scored: Carlos Alberto’s strike in the 1970 World Cup Final, the cherry on the cake in Brazil’s 4-1 win over Italy.

That goal has been described in a million other places but, in summary, a succession of Brazil players do some very nice things, Pele plays a lazy pass into space, and right-back Alberto outwits a divot to smash the ball inside the far post.

It’s great not only because of the skill demonstrated by all involved but because it’s finished off by a player whose position generally precludes goalscoring.

Gary Neville, Ashley Cole and Tony Hibbert will testify to this. Besides goalkeepers and the most stoic of defensive midfielders, full-backs are the players least likely to get on the scoresheet. They often stay back for set pieces while centre-backs advance, and they rarely bomb that far forward — or inward — during open play.

This means that when a full-back finally ends up in a goalscoring position, and then has the temerity to actually finish it, you know the team is doing something quite special.

That was the case when Brazil thumped Italy in 1970, and — in a much less glamorous way — was also the case when Chelsea battled to a narrow away victory against Spurs in August 2017, when Alonso netted first from a free-kick and then raced improbably far forward to secure a late winner.

The rarity of full-back goals doesn’t just make those individual goals special though. It also makes those anomalous full-backs who regularly score even more remarkable. Alonso, clearly, is one of those remarkable players.

Of course, it’s easy to say that his goalscoring is made a whole lot easier by the fact he’s not really a full-back at all, but a wing-back in a 3-4-3, slowly but surely cheating his way up the goalscoring defender charts.

But this simplification of formations and positions doesn’t really do the Spaniard justice. Harry Redknapp can show you why.

‘So really he’s a wing-back’

It’s been a while now since the Premier League collectively decided to embrace wing-backs again — a movement kickstarted by Man United’s 2014 appointment of Louis van Gaal, who had just taken the Netherlands to third place at the World Cup using a 3-5-2.

That summer, Van Gaal wanted to replicate the Dutch approach at United, but — for less obvious reasons — so did Harry Redknapp at QPR, who talked up Armand Traore and central midfielder Jordon Mutch as capable left wing-backs, with Danny Simpson and loanee Mauricio Isla earmarked for the right.

Needless to say, QPR’s experiment didn’t go to plan. Nor did United’s. If the 2014 World Cup showed that wing-backs were a viable tactic in the 21st century, the 2014-15 Premier League season showed they can still be hard to get right.

Traore didn’t score that year and QPR went down.

It wasn’t until October 2016 that England once again saw what wing-backs should look like. That was when Antonio Conte turned to a 3-4-3 following back-to-back defeats against Liverpool and Arsenal, turning Chelsea’s season on its head.

Ever since that tactical switch, Alonso and Victor Moses have carried out their wing-back roles impeccably.

But is it any easier for those players to score goals than it is for, say, Kyle Walker and Fabian Delph in Man City’s 4-3-3? Are they putting themselves at any significant goalscoring advantage? And if so, does the hard-to-pin-down role of wing-back render obsolete the ‘defender’ goalscoring charts, or make Alonso’s tally any less impressive?

In short: not really. Most modern non-Pulis full-backs, even those playing in a back four, are encouraged to get forward whenever possible, and a heat map of Chelsea versus City in September actually shows Delph — ostensibly the more conservative of City’s current full-backs — getting further forward than Alonso.

Wing-back or full-back, nobody else in the league can do what Alonso does, and for that he should be celebrated.