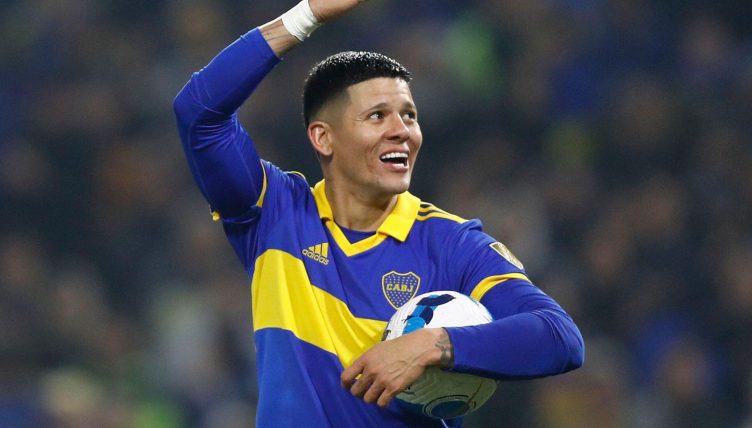 Marcos Rojo does not give a single, tiny little f*ck. Not one. In fact, the notion that he might give one at some point fills him with a cold chill of dread.

This is a man who, in an era when footballers are supposed to be bastions of healthy living and abstinence, celebrated Boca Juniors’ Copa de La Liga win by lighting up a fag, downing a can of Quilmes and tucking away a whole pizza… in the middle of the Bombonera pitch… while being filmed.

This is a man who repeatedly tries Rabonas even though he’s ridiculously shit at them just because he thinks it’s funny.

This is a man who – again while being filmed – picked up a fire extinguisher to use as a weapon in a mass tunnel brawl after Boca’s 2021 Copa Libertadores exit at the hands of Atletico Mineiro.

And he was at it again on Sunday, as Boca took on old Rivals River Plate in the first Superclasico of the 2022 Primera Division season.

Firstly, let’s look at the clip. Soak it in for a second in isolation, just the moment itself. Nicolas De La Cruz runs across Marcos Rojo and Rojo kicks him square in the gob with his studs up.

It’s really bad. Horrendously so, in fact. And even with a player sort of blocking his vision, the ref does not need to defer to the VAR. He knows what to do.

But looking at it and analysing it a bit more closely, Rojo’s kung fu moment becomes even more bizarre.

Firstly, there’s really no reason to do anything like this at this point.

It had been a tight, physical game, like almost all Superclasicos are, with Boca doing much of the fouling. But look at the scoreboard and the clock: 1-0 to Boca and 96:26 at the very moment his boot hits De la Cruz’s noggin.

There are 30 seconds to go in injury time and Boca lead through a Dario Benedetto header that had come half an hour before. The ball is bouncing to Rojo perfectly at head height, and he’s 99% sure to win it. All he needs to do is make a routine headed clearance and be done with it.

Then look again. You could maybe forgive the decision to attempt a kicked rather than headed clearance had Rojo been unable to see De la Cruz.

But unless the former Manchester United man has the eyesight of a mole, he surely gets more than a decent glimpse of De la Cruz out of the corner of his right eye before he swings a leg.

Yet, despite everything suggesting it’s the wrong course of action in every possible sense, Rojo does it anyway: full Bruce Lee, flying through the air, left leg six and a half feet off the ground, studs pointing towards the top tier of the stands.

You can then clearly see what’s going through his head after he makes contact. He first reckons he might pretend to be injured for a second, but he quickly changes his mind as he sees the intent in the referee’s gait.

The nonchalance with which Rojo then gets up, hands over the armband and accepts his fate is almost admirable.

He knows what he’s done and he knows it is pure football farce, utterly absurd and illogical.

You watch it mouth agape, but then you remember who this is we’re talking about and it all makes sense. He’s Marcos Rojo; he couldn’t not do it.

Boca had been sent out to rough up River and this was Rojo’s only opportunity to put the garnish on Michelin-star feast of shithousery. He has a reputation to uphold after all.

Rojo has now played five Superclasicos for Boca since rejoining from United in 2021. He’s got four yellow cards and two reds in those games.

At least this time he lasted 96 minutes rather than the 15 minutes he managed before getting a red in the previous league meeting in March, eh?

Some just feel right at certain clubs. With Rojo and Boca, you can go even further. Rojo is perfect for this club, in this specific fixture, doing precisely this thing.

It was his entire personality in a single act, the triple-distilled essence of Marcos. If he ever releases a perfume, Eau de Rojo, it will somehow manage to smell like kicking someone in the face in a Superclasico.