As Leeds discovered, Rashford is Dr Jekyll off the pitch but Mr Hyde on it 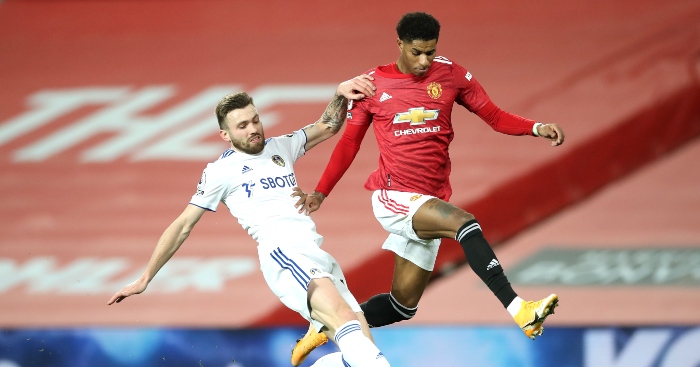 While Manchester United‘s Marcus Rashford shows generosity and compassion off the pitch, he continues to be ruthless and merciless on it.

Ahead of picking up a Panel Special Award at the BBC Sports Personality show due to his work to tackle child food poverty, Rashford had a day job to complete on Sunday afternoon.

Scott McTominay and Bruno Fernandes may have both got three goal contributions in United’s 6-2 win over Leeds, but the England international provided something far more important: fun.

He has already humiliated his fair share of Premier League defenders and wasted no time in adding Leeds’ back four to his catalogue of victims.

The 23-year-old picked up the ball on the left flank before driving at a bewildered Stuart Dallas. A body feint was enough to leave the defender trying to put his legs back on the right way around; even a stunning second-half goal wasn’t enough to save Dallas’ blushes.

While we would usually spend an unhealthy amount of time talking about this skill, Leeds quickly found out that this moment was only the starter.

The boyhood Red was only six years old when United last faced Leeds in the Premier League but clearly had something innate inside him that wanted to embarrass their cross-Pennines rivals.

Rashford’s eyes lit up every time a Leeds player tried to press him, knowing that played right into his hands, making his opponents even more susceptible to a deft piece of skill.

The forward continued to strike fear into his opponents throughout the first half and had Leeds players falling to the ground like skittles.

Marcelo Bielsa’s side may have already faced the likes of Liverpool and Chelsea this season but this was becoming a proper re-introduction to the Premier League.

Gjanni Alioski became the latest player to witness Rashford’s incredible footwork first-hand. The defender was completely fooled by his dummy and skidded across the Old Trafford surface like a car that had hit a banana on Mario Kart.

Rashford seemingly showed awe-inspiring levels of empathy to allow Alioski time to regain his footing, only to then leave him on the floor with a second dummy. What happened to Mr Nice Guy?

The forward’s shot was easily saved by Illan Meslier in the end, but why focus on the end result when you can just admire the beauty of this move?

Despite leading 4-1 at half-time, Rashford didn’t let up in the second half and continued to put on a show inside an empty Old Trafford.

While most players get given bonuses for every goal they score, we can only assume he gets a bonus every time he puts an opponent on their arse.

United had a comfortable lead, meaning the England international didn’t have to worry about the three points, allowing him to toy with the Leeds defence at will.

Rashford showcased some intricate skill inside the box and produced another dummy that left two defenders in a heap on the floor before Anthony Martial won a penalty moments later.

Ole Gunnar Solskjaer displayed his own empathy by deciding to withdraw Rashford in the 71st minute and save his opponents from further embarrassment.

Rashford may be football’s Dr. Jekyll off the pitch, but don’t think he won’t transform into Mr. Hyde when the referee’s whistle blows.