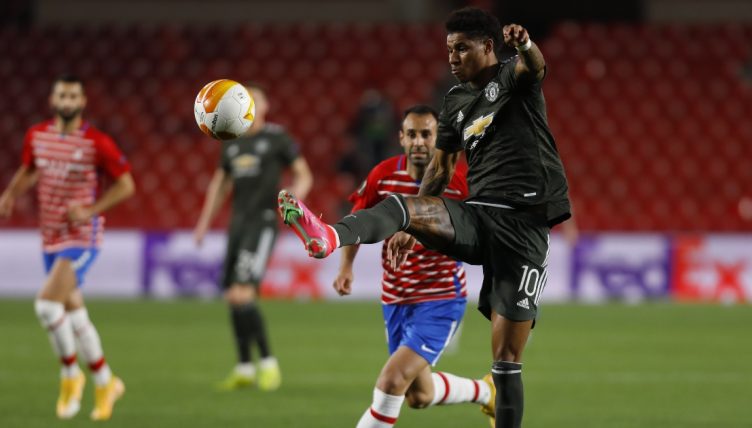 There are not many players in the world of football blessed with the reputation of having a trademark first touch.

Zinedine Zidane’s ability to turn defence into attack with one touch in midfield is well documented, grainy clips showing the Frenchman leaving many an opponent on the floor in shock as he gallops past them.

In the Premier League, Dimitar Berbatov became synonymous with the ability to kill any pass stone dead at his feet, while Mesut Ozil loved nothing more than cushioning a long-ball with the outside of his foot, his leg hooked behind him like a footballing scorpion.

But now, Marcus Rashford has forged one of his own at Manchester United; one that has a tendency to end with the ball in the net as well.

Judging the flight of a long ball as it drops over your shoulder is said to be one of the hardest skills a striker can master. There is so much that can go wrong in the time between the ball leaving the passer’s boot and the frontman’s first touch.

For Rashford, it appears to have become second nature. When Manchester United travelled to Sheffield United before Christmas, a lofted Victor Lindelof pass from the back arrowed towards the 23-year-old.

As he ran into the Blades’ penalty area, he plucked the ball out of the sky as naturally as a plant takes in sunlight,  before hammering a shot past Dean Henderson. With David McGoldrick giving the hosts the lead earlier, it was a crucial goal for a United side that had looked woefully out of sorts until that point.

On Thursday night, in a 2-0 win away to Granada in their Europa League quarter-final first leg, he repeated the trick.

Once again it was Lindelof who spotted Rashford spinning in behind the La Liga defence in the first half. As the Englishman prepared to take that first touch, his boot made contact with the paint of the opposition penalty area. It had to be perfect.

It was. Another smaller touch followed before he slid the ball to the side of Rui Silva to open the scoring after half-an-hour, and once again settle United nerves. His 20th goal of the season.

The best first touches are the ones that take you completely by surprise. Despite knowing he was capable of it, no one expected Zidane to pull off that iconic first-time Cruyff turn – yet he did.

Rashford’s touch against Granada turned out to be so good, that the most advanced broadcast technology the game has ever known could not keep up with it.

The Spanish TV director certainly did 😂

Marcus Rashford brings up 20 goals for the season 🎯#UEL pic.twitter.com/AsyaaMFxrW

As Lindelof’s pass sliced through the air, those watching from home were treated to a replay of a half-chance for Granada. By the time the live coverage had returned, the ball was rolling into the net.

Some sympathy should go the way of the local producers, however. There are not many players in the world capable of combining such an intelligent run and such an outrageous first-touch with such composure in front of goal.

It is clear that the producer is also trying desperately to return to the live feed as Roberto Soldado’s shot trickles the wrong side of the post, with the Europa League graphics creeping on to the screen before the replay had reached its climax.

But Rashford’s trademark touch is one so good, it’s capable of making both machine and human look like absolute fools.