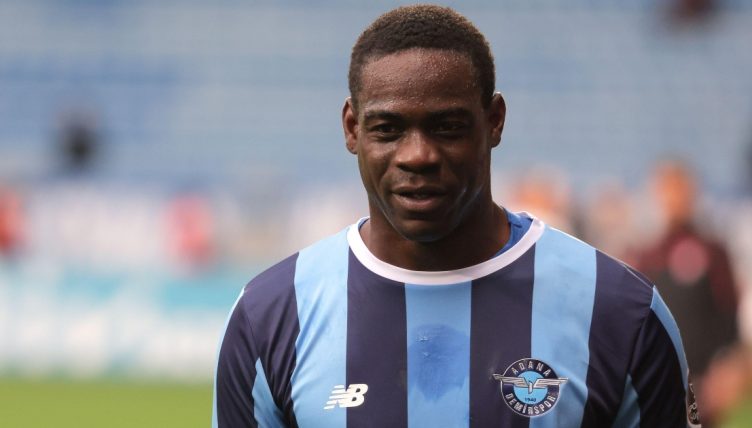 Love him or loathe him, there can be no arguing about the showman credentials of Mario Balotelli.

Balotelli was the Premier League’s maverick figure during the early 2010s, livening up a division that reflected the wider austerity of the nation.

Whether it was setting off fireworks in his living room, scoring goals with his shoulder or baiting Rio Ferdinand, the Manchester City forward was box-office material.

So, despite his former club sending the Etihad giddy with a 3-2 comeback win over Aston Villa to secure their fourth league title in five years on Sunday afternoon, Balotelli was never going to allow himself to be upstaged entirely.

As City won the Premier League with their trademark goal – a brilliant, undefendable cross from Kevin de Bruyne tapped home from the goal line after an enterprising run from one of their forwards – Balotelli scored the kind of effort that’d give Pep Guardiola an aneurism.

Receiving the ball on the left flank, the forward cut into the penalty area before performing seven step-overs in front of a perplexed Atakan Cankaya.

Seven step-overs. Seven. It was the kind of indulgence that’s usually the exclusive reserve of only children or Conservative cabinet ministers.

But it paid off handsomely. After leaving Cankaya in need of a lie-down and a hot drink, Balotelli shifted the ball onto his left foot and scored the kind of goal scored by a player totally in his element.

Yes, it was a deftly-executed rabona. And, yes, it effectively retired the goalkeeper on the spot. For all of their genius and success, you wouldn’t catch any City player doing that in a month of blue moons.

It’s hard to conceive of a more ‘Balotelli’ goal. Somewhere in Paris, the Mona Lisa is being quietly removed to make space for this sumptuous piece of art.

But his submission to the Puskas Award committee was also a homage to Balotelli’s unfulfilled talent. To a lack of focus and application that’s left him almost forgotten on the fringes of Europe while his former club scale the heights of English football.

The 31-year-old joined newly-promoted Turkish Super Lig side Adana Demirspor last summer and set about making the best of his reduced circumstances.

The city of Adana lies in the heart of Cilicia, which was once one of the most important regions of the classical world. But you’d be hard-pressed to find it on a map, even with the enhanced geography skills of your average football supporter.

Located 2600 miles away from Manchester, Balotelli’s presence in this footballing outpost is a revealing one. It’s a long way from the Etihad or San Siro, arenas which the former Italy international graced with distinction.

But when did Balotelli ever stick to conventions? Belying the sulky image familiar with English football fans, the forward has plundered 18 goals this season, including five on the final day as Adana thumped relegated Goztepe 7-0.

His rabona effort, dripping with audacity and ridiculousness in equal measure, ensured Balotelli became the first player to score five goals in a Super Lig match since Alex de Souza did it in 2011.

For any mid-table side, the final day of the league season is normally dominated by thoughts of sunny beaches and expensive, but underwhelming, cocktails drunk under a relentless sun.

And it can be argued those circumstances were the ideal stage for Balotelli to strut his stuff. Adana were already assured of survival and ended the season in ninth, above giants Galatasaray.

But, by any metric, it’s been a successful season for Balotelli in Turkey. And, with both Balotelli and Turkish football certifiably bonkers, rarely has a match been more suitable.

While his reputation hasn’t been fully rebuilt, and his days in Europe’s top leagues look all but over, Balotelli may have finally found a suitable stage for his enigmatic talent.

It’s somehow been 10 years since Balotelli rose from the Etihad bench to provide Sergio Aguero with the assist for that goal. The fact it was his only Premier League assist is one of the more jaw-dropping stats in the annals of football.

And, a decade later, it was fitting that he managed to steal the headlines away from Manchester City with a goal that was filthier than a teenager’s internet search history.

Remembering when a teenage Mario Balotelli destroyed Juve for Inter