Marouane Fellaini was the glue holding the Premier League together 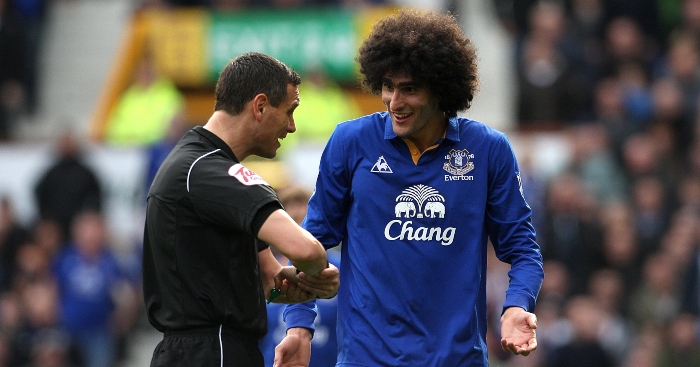 As the Premier League begins to look more and more broken, it’s increasingly evident that Marouane Fellaini was the glue holding it all together.

Take a look at the Premier League table. Everything seems a bit… decided, doesn’t it? There’s no impending drama. No peril. Nothing to look out for and think, ‘This is going to be great!’

There’s a reason for this. For the first time in a decade, we’ve gone into a Premier League season without the looming spectre of Marouane Fellaini, and boy are we noticing that now.

Unless you supported one of Fellaini’s teams, he never exactly arrived in England – he was just there.

Even his signing was overshadowed, coming as it did on the same evening which brought Dimitar Berbatov to Manchester United and Robinho to Manchester City.

Shortly thereafter, a giant tree had manifested itself in Everton’s midfield and we all collectively thought, ‘Sure, this makes sense, why not?’

Within about a month, we’d already forgotten a time when he wasn’t around, like Starbucks or Kanye West. Part of this was because you could hardly miss a man with his profile, but even if there had been a chance of missing him, he was determined not to let you.

If Fellaini’s three goals in his first eight games didn’t leave a big impression, his five yellow cards certainly did. There’s some debate over whether his build and haircut marked the Belgian out as a more obvious target to referees, but for whatever reason, he ended his debut campaign with more bookings than any other player – not bad for a man who only arrived in time for the fourth game of the season.

A few more cards and a lot more violence would follow during his time on Merseyside, but it came in close proximity to moments of real quality. It was as if the aggression was part of the creative process.

Anyone going up against David Moyes’ Everton will have been well aware of the aerial threat, but Fellaini’s presence added another dimension.

You can be stood there, dealing with the obvious threats and then boom! A loose Fellaini, marauding like a rhino, will ignore factors like ‘a lack of space’ or ‘not physically being able to run through human men because science doesn’t work that way’ and power the ball home. If you get in the way, it’s no one’s fault but your own.

Now, though, we’re back to the BF, or Before Fellaini, era.

Attacking players make runs at set-pieces and, sure, some of them are out of the ordinary. However, they’re always within the realms of what is and should be possible. As long as you understand science, you’ll be able to figure out how and why you conceded.

Yet that wasn’t always the case, and we’d be lying if we said we didn’t want to return to an age where, not only had you conceded a goal, but your shirt was suddenly on back-to-front and you felt pain from a part of your body you didn’t even know existed.

This is what made the creativity so surprising, though. No player was meant to destroy and create in this way. Destruction married with powerful headers was one thing, but improvisation wasn’t just meant to not come with the territory – it was designed to belong to a vastly different territory altogether.

When Fellaini used his intellect to create, it left us baffled: was there the same method to what we’d dismissed elsewhere as brute force? And, if so, why was no one else able to pull it off?

Fellaini’s time in England can be neatly divided into pre- and post- Manchester United, where he went from being the good kind of novelty item to the bad kind.

The biggest difference was not his output, but rather the expectations associated with his first two Premier League clubs.

It’s a bizarre piece of logic, especially considering Fellaini would have fit in just fine in plenty of Alex Ferguson’s squads, but the idea of him being Moyes’ man was hard to shake – especially when things turned south for the man who took him to Old Trafford.

Fellaini didn’t help himself there, and he’ll admit to being under-par in his first United season, but the outside impression didn’t change even when he returned to put in the kinds of displays we saw at Goodison Park.

The problem was accentuated when people considered the better aspects of Fellaini to be unbecoming of a team with aspirations of battling it out at the top of the table. There was a sense they shouldn’t be reliant on someone crashing the party unexpectedly to bail them out, but this all stemmed from a sense that they should never need rescuing.

If we do get a third act to Marouane Fellaini: Premier League Footballer then many will think they know what to expect. It says a lot about him, then, that after all this time he still has the capacity to confuse.

After all, if he was that predictable then surely people would be in a position to stop him.

What we’d be welcoming back is not Fellaini’s end-product or reliability, but rather the opposite: we’d be crying out for a player who, rather than offering variations on football as it should be played, has seen the rulebook and decided it’s only ever been for show.

The concept of being ‘difficult’ can manifest itself in a few different ways. Some will harm your opponents, some will harm your own club’s approach, but none will leave everyone looking at a player and being able to confidently say, “I understand what you’re about.”

We don’t miss Marouane Fellaini because we know what he can bring to the table, We miss him precisely because we don’t know.