You think we can’t compare Odegaard to Messi after that? We can and we will 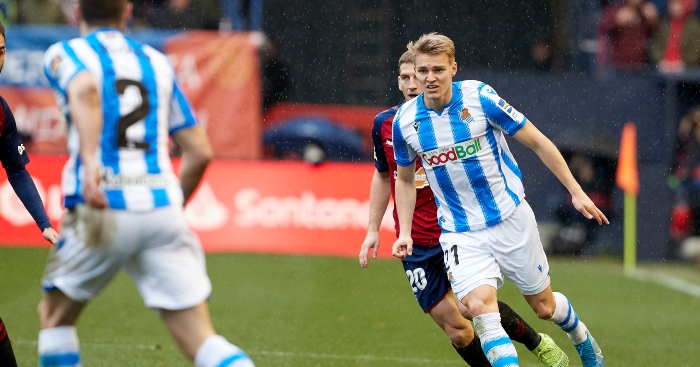 Martin Odegaard was already having a great season before Real Sociedad’s trip to Osasuna, but he’s just kicked it up a notch.

The Norwegian has been one of the stars of La Liga this season, leading some to suggest he’ll walk straight into Real Madrid’s team once his loan ends and he returns to his parent club, and more weight is being added to that theory with every passing week.

No player in the Spanish top-flight has more key passes per game this season, while Odegaard is also in the top five for dribbles per game and assists. And it’s been going on long enough that it’s far more than just a bright start.

Furthermore, the 4-3 win over Osasuna was Odegaard’s first game since turning 21, which provides us a timely reminder of how obscenely young he still is.

Yet by stepping up to hit this free-kick at Estadio El Sadar, he’s reminding us all that this is his house, even when it isn’t.

He has laid out a red carpet for himself even when he knows the paparazzi will be otherwise occupied, and donned his tuxedo when he knows full well he is both the star of the show and the most engrossed member of the audience. He isn’t doing this just for himself, but nor is he ignoring his value as his own cheerleader.

Now, I know what you’re about to say. “Tom, you can’t just call every left-footed free-kick which flies into the top corner ‘Messi-esque'”.

And besides, that’s not the only ingredient here which invites comparisons with the great man.

There’s the approach, with which Odegaard seems to be thinking ‘how can I cause the maximum possible embarrassment’.

There’s the accuracy and power of the free-kick itself. And then there’s the pure helplessness of Sergio Herrera in the Osasuna goal, who draws back like a man whose body language acts as a request to go home to his warm bed and never see Martin Odegaard ever again.

What’s that, Sergio? You wanted to save it? What made you think that was ever an option?

Odegaard has stepped up to the plate, told everyone what he’s going to do, and then been good enough to do it anyway.

Early in his Real Madrid career, when there were question marks over where he fit into the setup both stylistically and in terms of ability, he might not have attempted something like this. However, in the last few months in San Sebastian, it’s as if he’s remembered there was a reason why he’s been the big dog before and nothing should stop him from reaching that point again.

The free-kick followed a fine assist for Mikel Oyarzabal’s opener, adding to the ringmaster aura, and there’s every sense there’s more where that came from.

Sometimes it might just be possible to will yourself into becoming the king, and playing as if he’s watching his own majesty is helping fuel the fire.

Just another day at the office for the wonder kid. pic.twitter.com/52MqnWv9D2

Every time Odegaard produces a performance like the one at Osasuna, we’ll see the usual calls for him to be fast-tracked back into the set-up at his parent club.

The difference now is the dissenting voices are becoming quieter and far more distant. Those question marks over his ability to produce in a top league have gone, and the mixed form of Real Madrid’s biggest names means there’s a little less justification for holding him back.

With Cristiano Ronaldo long gone and Eden Hazard still getting up to speed in La Liga, it’s hard to ignore someone with this kind of talent – especially when he’s effectively following you down the street with an airhorn, such is the volume of his reminders.

Martin Odegaard is going to keep showing us how good he is, and at this stage it would be rude of us not to listen.