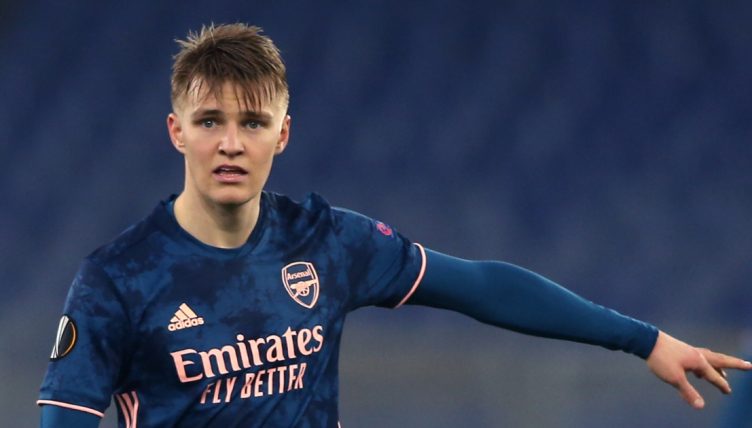 There have been some frustrating times at Arsenal in recent months, but the introduction of Martin Odegaard is the latest development in reclaiming the club in the hearts of aesthetes.

A whole generation of Gunners supporters – and football fans in general – have only ever known the football Arsenal produced under Arsene Wenger. Flaky and insubstantial at times, sure, but rarely anything other than admirably watchable.

But back in the autumn, with Mesut Ozil banished to the cold and more faith shown in the more experienced big-name signings than their crop of promising youngsters, Mikel Arteta’s Arsenal resembled latter-era George Graham more than anything under Wenger.

Stodgy and unadventurous, with Willian and Nicolas Pepe out of form and Pierre-Emerick Aubameyang cutting an isolated figure, Arsenal were struggling for goals and unthinkably languishing closer to the relegation spots than European qualification.

In a run of seven Premier League games without a win – five defeats, two draws – from November into December, Arsenal scored just three goals. Often it looked like there wasn’t a single creative player in a red shirt.

Worst of all, it was a fair reflection of how they were playing. The underlying numbers were those of a lacklustre bottom-half side. Could this really be Arsenal?

Slowly but surely, step by step, Arteta’s Gunners are moving away from that startling lack of creativity and incision and back to something resembling the quick, passing football befitting of their modern image. Slick Adidas adverts never looked right alongside the pedestrian pace of their football.

A run of good results coincided with academy graduates Bukayo Saka and Emile Smith Rowe establishing themselves as important cogs in Arteta’s machine.

It was no coincidence that Aubameyang scored his first hat-trick in the with the two youngsters in support, and Odegaard – an actual, proper playmaker – given his first start in between them, in the 4-2 win over Leeds United.

Three months ago, Arsenal seldom looked as though they had a single player on the pitch capable of carving open a scoring opportunity. Now they boast three.

Odegaard is yet to register a goal or an assist in his loan stint from Real Madrid, but there are plenty of encouraging signs. Not least with another start in the eye-catching display in Arsenal’s 1-1 draw with Benfica, and a key role in their quickfire equaliser.

"He's prepared to play a risky ball, which I like."

Martin Ødegaard turned heads with some flashes of his skill tonight, but @martinkeown5 wants his teammates to involve him more 🇳🇴#UEL pic.twitter.com/v0SU67XFOw

Receiving the ball on the edge of the box after a chaotic Benfica scramble to clear the ball, the 22-year-old had the vision and speed of thought to choose the right option: a first-time pass into Cedric Soares on the overlap, allowing the full-back to play a square ball for Saka’s close-range finish.

It wasn’t anything special, but it was the kind of simple, unhurried and well-executed decision that Ozil would make during his peak assist-racking years. The kind of moment Arsenal have desperately lacked at times this season.

The pre-assist might have been Odegaard’s only decisive contribution, but it was one of several eye-catching moments in an all-round lively display.

In particular, there was a sensational moment whereby the Norwegian backheeled the ball into David Luiz – let’s just ignore that the defender strayed offside for now – before receiving it back, taking a touch before beating a defender to go bearing down on goal.

He could (probably should) have shot, but instead played a short pass across the six-yard box to Dani Ceballos, who failed to finish with the ball stuck under his feet.

What’s more Arsenal than that? It’s as if the playmaker watched The IT Crowd’s “Arsenal always try and walk it in” skit as part of his research before arriving.

Playing like this, it looks a matter of time before he, Smith Rowe, Saka and Aubameyang combine to score a Jack Wilshere against Norwich-style team goal.

Odegaard is only at the Emirates on a half-season loan, and he’s only made two starts, but already he looks like he’s found his home.

Can you name every team to knock an English club out of the UEL since 2000?