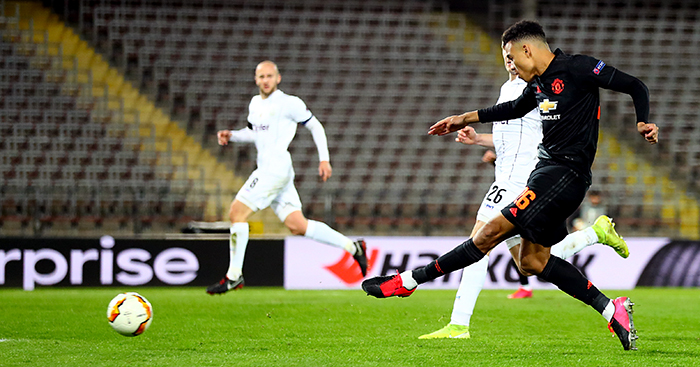 Manchester United scored some brilliant goals against LASK. For long-termists, however, Mason Greenwood’s was the pick of the bunch.

How do you evaluate a match like that? Played behind closed doors, United’s Europa League tie at LASK Linz felt a lot like a training session.

Weirdly audible sounds included Ole Gunnar Solskjaer saying “well done, son” to Bruno Fernandes — who probably doesn’t understand why the manager is addressing him that way — and a sad, lone singing voice in the stands, doing its best to rouse the Austrian underdogs.

The atmosphere certainly affected the gameplay.

If LASK were ever serious about winning on home soil, they probably needed more than one drunk man and his sombre Germanic ode. (When a larger group of voices eventually banded together with 10 minutes left to play, Juan Mata’s goal cut them short.)

Real encouragement from the stands could perhaps have forced a LASK goal or a United error. As it was, bare and eerie, the game could only present the players in practice mode.

No individual buckled under the non-existent pressure, and none raised their level with the buoyancy of an unheard roar from the terraces.

In that sense, it provided a fairly objective look at the technical level of the players. If you didn’t think the majestic Odion Ighalo could do some keep-ups then score a 20-yard screamer with his left foot, you were wrong. That being said, he might not have had the mental composure to do it at a packed Old Trafford.

The quality of the opposition also makes it hard to judge United’s performance. Fred’s pinpoint through ball for Mata certainly looked magical, but the LASK defence might have played a big part in that.

And needless to say, Andreas Pereira’s long-range, last-second strike wouldn’t have found the net against a Premier League side. (Except maybe an Allison-free Liverpool.)

Because United’s fourth contained individual brilliance that can’t be boiled down to circumstance: even though United were home and dry when he scored it, the youngster’s goal gave plenty of fresh reasons for United fans to get excited about the future.

Two of those reasons were wearing Nike boots.

We’ve heard a lot about Greenwood being almost perfectly ambipedal. Before the season started, a lot of people got excited about the youngster taking free-kicks with either foot, and we’ve seen glimpses of that rare trait over the campaign.

Most of Greenwood’s 12 goals so far have been with his left foot, but his first senior goal, against Astana in the Europa League, was with his right.

He also scored an FA Cup penalty with his right, maybe just to throw us off the scent of which he really prefers.

And in his very brief cameo against LASK, Greenwood again showed us that he genuinely doesn’t possess a weak foot.

With the clock ticking towards the second minute of stoppage time, a bouncing clearance found its way to the forward on the left-hand side. With expert control, he killed the ball with his left foot, then curled a neat pass to Tahith Chong with his right.

A very creditable bit of play in itself, but the 18-year-old still had much more to do.

After sprinting 40 yards to get on the end of Chong’s through-ball, Greenwood took two touches with his right foot before lashing the ball in at the near post with his left, completing a stunning goal all of his own making.

A goal made in Man Utd's academy…

Man Utd have a serious talent on their hands with this kid 🙏 pic.twitter.com/gWC6BQjwyx

Yes, poor knackered Christian Ramsebner didn’t do all that much to catch up with his young opponent, but this was still, arguably, the most impressive piece of individual play over the 90 minutes.

Few keepers would have stopped the venomous shot; even fewer strikers would have thought to put it at the near post. Greenwood is truly out of the ordinary.

Of course, it’s foolish to take away too many positives from a game like this. Mata, for example, scored a lovely goal, but he looked sluggish for large periods of the game. And the much-improved midfield axis of Fred and McTominay gave the ball away too often here, against opponents they should have been running rings around.

With Greenwood, however, we can make an exception. Every touch, every precocious bit of creativity, is a glimpse into the kind of player he can become. He might not be scoring goals like this against world-class opponents today, but he probably will be in three seasons’ time.

The forward continues to put his best foot forward — both of them — every time he gets on the pitch.