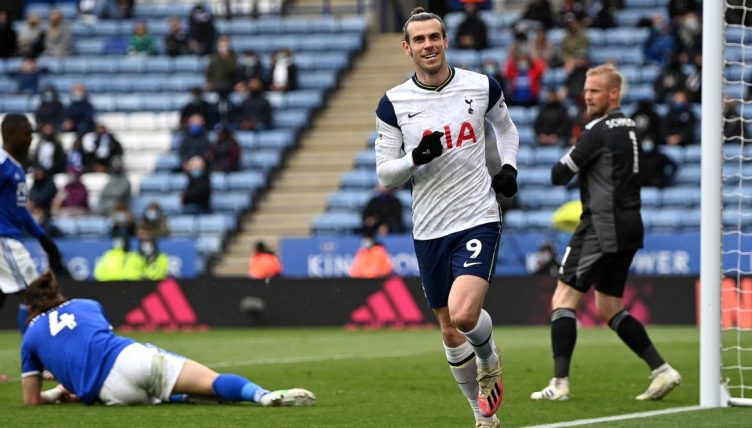 “I know what I’m doing, but it’ll just cause chaos if I say anything,” Gareth Bale said sheepishly after he had jovially, brutally buried Leicester City’s chances of a top-four finish on Sunday afternoon in the East Midlands.

It was a tantalising response to an inquiry about his future – not the response Tottenham fans wanted, but fascinating nonetheless. He’s decided, but he’s keeping shtum.

But how explosive can this announcement really be? When Real Madrid are involved, any news is big news. But ‘man transfers from one club to another club‘ is a story that happens all the time. Surely we’d get over it soon enough. Anyway, how do you even know it would cause ‘chaos’?

Just tell us, Gareth. C’mon mate, there’s no harm in it. Just let us know what you’re doing. Where are you gonna be next season. Where? Tell us, we beg you.

Yet maybe, just maybe, he is wise in his choice, as much as it leaves us wishing for more. There is a European Championship to focus on and he knows all too well what effect a media circus can have on a player – he was the lion at the centre of one in the Spanish capital.

And as for the ‘chaos’ part, he’s pretty well positioned to make an accurate prediction on that, too. Why? Well, because Bale is chaos’ master. His 27-minute superstar turn at the King Power was more than enough to confirm that.

Steven Bergwijn had toiled and run for the 68 minutes he had been on the pitch. But he had been fairly ineffective in the final third and was on a yellow card. Arsenal were ahead against Brighton, so Ryan Mason needed to do something.

Leicester had given it their all, but with the game coming to an end and the efforts they had made in their two ‘finals’ – a real one and a metaphorical one – with Chelsea, they had nothing left. Mason summoned his old mate Bale and the game was about to be changed – an end-of-season slugfest injected with a killer dose of pure, unadulterated havoc.

First, it was Bale who was sent to stand in Kasper Schmeichel’s line of sight for the free-kick and the corner that led to the big Danish ‘keeper sticking the ball into his own net for Spurs equaliser.

Then, when he finally got the ball at his feet, the Gareth Bale show began. With three minutes of normal time left a Leicester attack was terminated by Davinson Sanchez. Lucas Moura fed Bale and with space to run into, the Welshman was in his element.

He drove forwards, nipped past a knackered Youri Tielemans, fed Heung-min Son, who backheeled the ball to Harry Kane, who, unusually, elected to keep the ball rather than shoot. For a second, it looked like the chance had gone – then Bale glided into the picture, Kane laid it off to him and with a swoosh of his heavily insured left foot he left Leicester’s Champions League dream in tatters.

Off the bench to do the business.

Bale’s work was not done, though. Seven minutes after his first, a Caglar Soyuncu clearance hit Tielemans, fell to Bale and the Spurs No.9 was in again.

This time the Leicester backline parted like the Red Sea. So simple was his progress that Bale decided to make things a little more difficult for himself by playing a one-two off the post to take him around Schmeichel, from where he tucked into an empty net.

If it was his last game for Spurs, he was going to make it one to remember, just like the second half of the season has been one to remember for him, on a personal level.

In February, one English newspaper ran the headline: ‘Gareth Bale’s four Tottenham goals have cost the club a whopping £3.4m EACH since Real Madrid loan.’ The article was littered with words like ‘damaged’ and ‘flop’. Since then, he has scored 12 and provided three assists in 18 appearances, seven of which have come from the bench.

Just a suggestion here, but maybe his first-half-of-the-season ‘flop’ was down to something or someone other than Bale himself? Can’t think what or whom, but it’s a possibility.

Anyway, those goals and assists over the last four months also mean that Bale has ended the campaign as Spurs’ third most productive player and one of the best goals-per-minute forwards in Europe. In the league, his 11 strikes came one every 83 minutes, on average. Not bad for a player who was past it. Not bad, either, for a man who is costing Spurs £20million a season in loan fee and wages.

Calling anything or anyone that costs £20million a bargain is a bit of a stretch. But to replace Bale’s productivity, Spurs would probably have to shell out a £50million-plus transfer fee, as well as stumping up significant wages. Making a good offer to keep him, then, is surely a no-brainer for Daniel Levy.

But as Bale said post-match, he’s not going to tell us whether that offer has been accepted. We’ll just have to hold tight and, instead of the transfer chaos the announcement will cause, content ourselves with the footballing chaos Bale will bring about across Europe this summer.