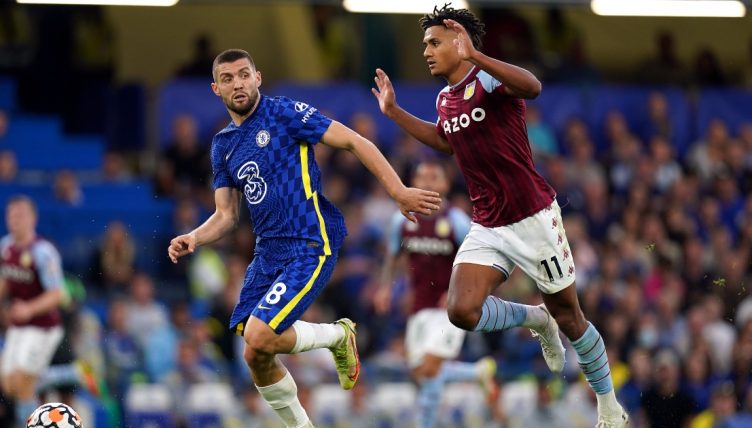 Romelu Lukaku will rightly get the plaudits for continuing to deliver for Chelsea, but Mateo Kovacic has continued to show his importance to the team.

On a day when Thomas Tuchel was forced to remove new signing Saul from the firing line at half-time, one of the Spaniard’s midfield colleagues showed an all-round quality which the Blues needed more than ever.

Not only did the former Real Madrid man step up to the responsibility of doing the work of two men as Saul found his feet, but he also found time to deliver in the final third in a big way.

Kovacic’s pass for Lukaku’s opener against Aston Villa is one of those which looks impressive enough in real-time, but it’s only after a few more glances that you understand the precision required.

He spots the striker’s run early and manages to instantly identify Axel Tuanzebe’s trajectory just enough to slide the ball beyond him, but it’s the ability to do this while all the moving parts are traveling at pace – including Kovacic himself – which makes this special.

We sometimes talk about strikers using their defender as a guide to curl shots into the far corner of the net, but that’s at least a relatively static marker. This is more like a snooker player pulling off a trick shot while the balls are still moving from the break.

A goal and an assist to his name

His energy in midfield is surely going to be useful this season with Lukaku benefiting and finishing off the chances he will be creating #Chelsea pic.twitter.com/gX2EfSxfEf

The act is impressive enough in isolation, but then you add in the fact that it came at a time when Kovacic was doing everything else too.

The Croatia midfielder led the way for Chelsea in pressures, successful pressures, tackles, touches and carries (per FBRef), which is as close as you can get to a mathematical representation of ‘he was everywhere’. If you were to plot a graph of his touches and movements against Villa, the dots would probably move around on their own to spell out the phrase, ‘Anyone else want to help me out here?’

If Tuchel can get this kind of performance out of one player on a regular basis, we might need to worry about him discovering a hack that allows him to use even more of his attacking talents in a single game. This 48-year-old DESTROYS tactics with one weird trick.

By the time the second half rolled around, and Kovacic was on hand to turn a loose Tyrone Mings pass beyond Jed Steer, the only reasonable response would be to think, ‘Well, obviously, who else was going to be there when he was the only person occupying 90% of the pitch at any given moment?’

Good morning to those who rated Kovacic since day zero pic.twitter.com/TKo9VriK6W

Sure, on another day we might have had a scenario where Villa were able to call upon Emi Buendia and the absence of a coherent midfield partnership in the first half didn’t go unpunished, but Kovacic knew what his role was in this moment – or perhaps what his roles were – and did all that was needed of him and more.

After the summer brought conversations of whether N’Golo Kante or Jorginho might be in line for the Ballon d’Or, and both men winning awards at Uefa’s ceremony for the 2020-21 season, the current season could be one in which the more unsung member of the Chelsea midfield rises from the shadows of his colleagues.

You don’t play for Inter, Real Madrid and Chelsea without having real quality, but the presence of some notable team-mates means Kovacic has occasionally found a way to keep it hidden away from those who don’t watch him in action week after week. Now, though, that might be changing.