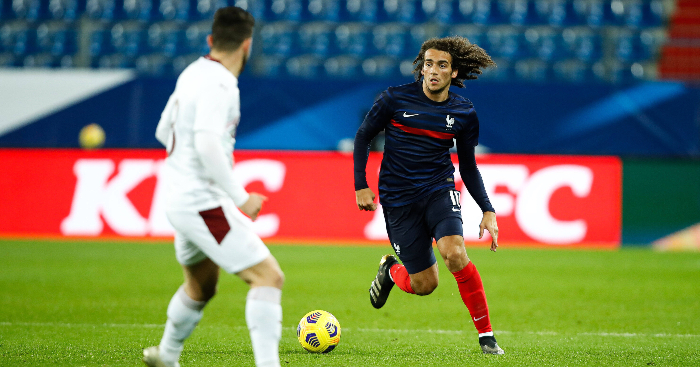 There was every reason for Arsenal fans to be excited by Matteo Guendouzi during his breakthrough 2018-19 campaign. Back then, few would have imagined where he’d find himself two years on.

As Mikel Arteta targeted new faces for a new-look midfield, Guendouzi was touted around in the summer as Arsenal tried and failed to find a buyer. Arteta seemed so happy to move on from that forgotten man Mohamed Elneny has enjoyed a surprise resurgence after a loan away at Besiktas.

Indeed, his last act for Arsenal may well have been his quarrel with his compatriot Neal Maupay, grabbing the Brighton striker by the throat and allegedly taunting him over his inferior salary.

Arteta hasn’t been afraid to show his ruthless streak on his return to the Emirates, laying down the law to a number of players and omitting Mesut Ozil from their Premier League and Europa League squads entirely.

It appears that Guendouzi fell victim to that, out of the first-team picture after the episode at the AMEX, with the current Arsenal boss appearing to focus on squad harmony by adopting the All Blacks’ famous “no dickheads” policy.

Given all that, it’s easy to forget the Lorient academy graduate offered a ray of hope for the post-Arsene Wenger era when he arrived as a teenager in the summer of 2018, hailed as a player with enormous potential by new boss Unai Emery.

It wasn’t long before he’d get a chance to demonstrate that potential, having been thrown in at the deep end with his competitive Gunners debut against reigning champions Manchester City on the opening day of the season.

Pep Guardiola’s side ultimately ran out comfortable 2-0 winners, but the new recruit retained his manager’s trust and was a key player in the club’s best run of form since Wenger’s departure.

Guendouzi shone in midfield as Arsenal won seven Premier League matches in a row and went unbeaten over 22 outings in all competitions between late August and mid-December.

He received rave reviews, with his engine, technique and spectacular range of passing evident early on. He looked a silky, wonderfully talented individual that was always eager to try his luck with line-breaking passes from deep.

His tenacity and willingness to stick a leg in were also a welcome addition, especially with fellow new recruit Lucas Torreira alongside him, offering bite to Arsenal’s midfield after years of it looking meek.

But both the player and club failed to maintain those autumn 2018 standards over the whole campaign, and last term proved even more challenging.

Arsenal endured their worst Premier League placing – eighth – since 1995, while Guendouzi showed little signs of progression. Sitting on the sidelines for the club’s FA Cup and Community Shield victories at Wembley offered compelling evidence that Arteta wouldn’t require him.

Still, he’s just 21 years of age, and now out on loan at Hertha Berlin, there’s evidence he’ll yet realise that early potential. A new environment appears to be just the tonic.

After a brief cameo off the bench in a 1-1 draw against Wolfsburg, he showed what he can offer on his full debut for the Bundesliga club, playing deep in Bruno Labbadia’s Ralph Hassenhuttl-inspired 4-2-2-2 system as they produced a 3-0 victory away at Augsburg.

Against Augsburg, he had 69 touches of the ball (as many as any opposition player), registered an 89% pass completion rate and made three successful tackles – the joint-most of any play on the pitch. According to German outlet FR, he ‘steered the game from deep’.

Evidently not short of confidence, Guendouzi produced another commanding performance during the international break, starring for France’s Under-21s victories over Lichtenstein (5-0) and Switzerland (3-1), particularly impressive in the latter.

Time and again he won or received the ball in midfield, got his head up and looked to progress the ball through both his dribbling and passing.

Mattéo Guendouzi with a masterclass tonight for France's U21s – intensity of pressing phenomenal in the dying embers of this match, with Les Bleuets playing with 10 men for over 30 mins owing to Colin Dagba's red card.

The standout moment came in injury time, just as the Swiss had gotten a foothold in the game, when he showed zeal to rob the ball out on the right flank and darted into their wide-open half. There was a covering defender by the time he reached the box, but he had the composure to square it and tee up Nantes starlet Randal Kolo Muani.

Having a point to prove looks to be doing wonders for Guendouzi. It looks like he’s going to spend the season doing everything he can to show Arteta what he’s missing, and we can’t wait.