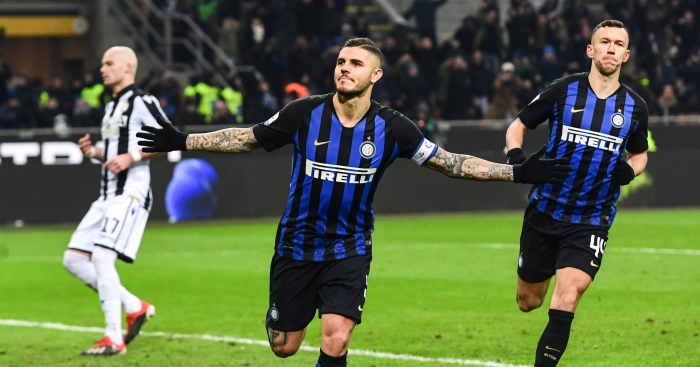 Not all footballers react to being the centre of attention in the same way.

They can retreat into their shell, absorbing the pressure and letting it get to them to the point that they overthink everything and it detracts from their overall game, or they can lean into the responsibility and play as if they alone can stop the enemy.

Mauro Icardi has chosen the second option, and it suits him.

Three of his nine Serie A goals this season have been winners, and his four strikes in the Champions League were the difference between Inter coming one goal from qualification and finishing bottom of their group: take away his goalscoring contributions and the Italian side would have two points rather than eight, and none from their last four games in the competition.

When you have that kind of magic touch, you stop trying things and start doing them – the element of doubt disappears as you know the end result before the first whistle.

We saw this in Inter’s game against Udinese in Serie A: towards the end of a frustrating afternoon, with the game goalless, the hosts were awarded a penalty.

In such a high-pressure situation, it might have been tempting for Icardi to put his foot through the ball and scream it into the net through sheer force of will, the penalty equivalent of an angry drunk charging at full-pelt towards a strength-tester. Instead, he did this.

Some players are often accused of looking for the camera as soon as they score, as if they’re hyper-aware of letting everyone know what they have just done.

It’s different for Icardi, though: he finds the nearest camera before taking the kick, effectively the fourth wall, and tells those watching (because there are always people watching) to pay attention to what he’s about to do.

He’s the kid on the diving board, yelling at his mum to look at his triple somersault – he knows his brilliance is amplified as the number of eyes on him goes up, and yet the pressure of attention only makes him stronger.

The pre-emptive chest-thumping is partly genuine but partly a ploy to draw the same energy from Udinese goalkeeper Juan Musso, a man confident enough to pump himself up but inexperienced enough to not quite register how he is being manipulated by doing so.

The ease with which Icardi slows his stride and strokes the ball into the empty net is as delightful as it is inevitable. Musso is the Hanna Barbera villain, sprinting to catch his enemy only to realise he has overshot a cliff-edge and watches on as gravity does its thing. 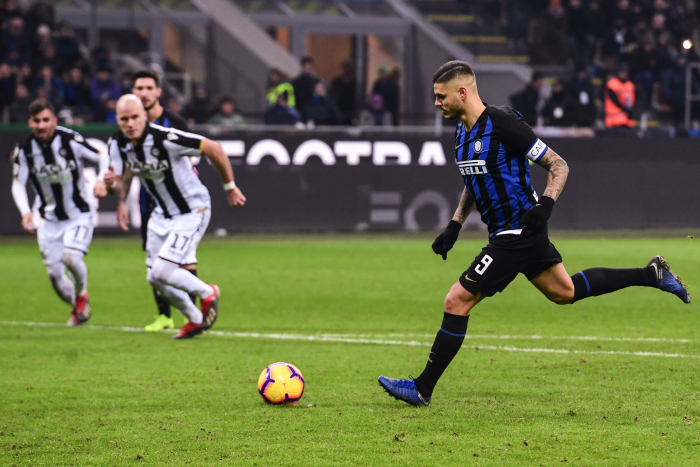 The sheer lack of pace on the Panenka from Icardi might feel like it can be condensed into a warning about hubris, and that on its own feels contradictory given the identity of the man dispensing the advice.

Perhaps its more aspirational, giving the goalkeeper a level of hubris to aim for but keeping him grounded in the knowledge that – until he reaches that level – failures will be more cutting than he could possibly imagine.

Moments like this are impressive enough on their own, but they also give Icardi’s more Hollywood goals that extra bit of gravity.

Take his equaliser against Tottenham in the Champions League, for example. It’s not the sort of goal we’ve come to expect from the Argentine, and at first glance it feels a bit like Eminem performing an instrumental, but after a couple more watches you realise it scans perfectly with his role on a football pitch.

Icardi’s greatest strengths don’t even come from hiding in plain sight – instead, his strength comes from allowing the opposition to have him exactly where they want him, only for them to realise that isn’t enough to stop him keeping things on his own terms.

As they approach the final five minutes in Milan, Spurs know the main and most dangerous threat will come from leaving Icardi one-on-one with a defender, with the potential to get goal-side and drive towards Michel Vorm’s goal. By getting bodies behind the ball, they’re minimising the risk – or at least they would be if they were in as much control of the situation as they thought.

Icardi’s volley is so well-struck and so devastating that you wonder why he doesn’t score goals like this more often, but then you realise he doesn’t because he doesn’t need to. Against Spurs, there was an element of “oh, so this is what it’ll take,” but it’s rare for Icardi to find himself in a position where the original plan hasn’t worked.

Since the 25-year-old scored his maiden Serie A goal, netting for Sampdoria on his first start in the competition, no player has scored more goals (though he has a year’s headstart on Gonzalo Higuaín). Many footballers have acted like they see themselves as the protagonist of life, but Icardi might actually pull it off.

This is someone who scores when he decides to score, in the manner which suits him the best. If you think you can stop that, more fool you.

13 of the best and worst Panenkas: Zidane, Pirlo, Ramos, Crouch…