Mbappe might be the star, but Paredes is the man with the keys for Poch’s PSG 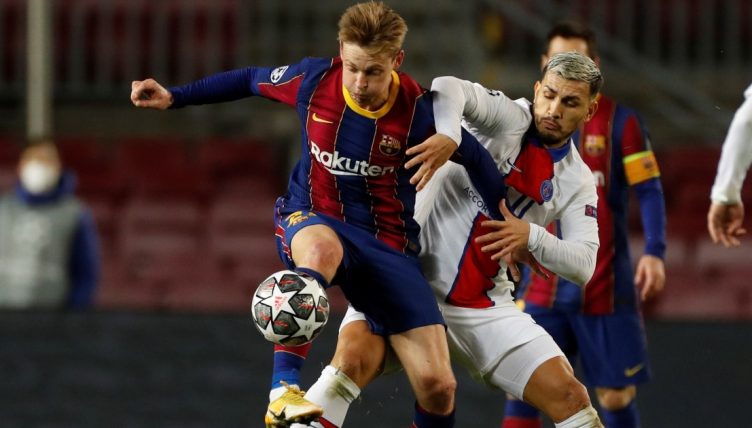 If last season’s 8-2 humbling at the hands of Bayern Munich was a knife to the heart of the Barcelona-Lionel Messi era of dominance then Tuesday night’s 4-1 reverse at the Camp Nou to PSG was its death rattle.

Barca have come back from the same scoreline in a two-legged European tie against PSG before – the Remontada in 2017.

But after the desperately disjointed performance they turned in in the second half you’d be brave to bet on them repeating the feat at the Parc de Prince on March 10.

And Messi, who so desperately wanted to depart the Camp Nou in the summer of 2020, wouldn’t have seen much to make him want to stay past summer 2021.

But in among the depressing sight of his Barcelona team-mates being overwhelmed by their Parisian counterparts, the Argentina captain did catch a glimpse of something that will give him hope for a brighter future – if not in Catalunya, then at least with his national team.

As PSG took the game by the scruff in the second half, it was an Argentinian who stole the show, pinging passes and providing the sort of deep-lying midfield control that the French champions have so severely lacked in recent years.

While Kylian Mbappe might have got the headlines for his searing speed and sublime finishing, it was Messi’s international team-mate Leandro Paredes who set the tempo, as influential a presence on the Camp Nou pitch as Sergio Busquets was when at a peak that long since looks to have passed.

Differently to Busquets, though, Paredes’ value did not come in the relentless, metronomic nature of his passing, but in his provision of balance and his eye for spraying long, defence-splitting passes from deep.

Taking a position between the centre-halves that, with Messi playing as a centre-forward, was never likely to come under intense pressure, Paredes was afforded the room to break Barcelona lines again and again.

He is not a midfielder that is best analysed with stats on pass numbers or percentages, nor on tackles and interceptions, but in watching how he passes and where he does his work.

In the first half, Paredes gave a warning of what was to come in the second, starting the move that led to Mauro Icardi fluffing a fine chance after 18 minutes and playing a stunning 70-yard ball to Mbappe that resulted in Layvin Kurzawa forcing a full-stretch save from Marc-Andre ter Stegen when the score was 1-1.

Barcelona did not heed the warning, Ronald Koeman doing nothing to stop the supply. In the second period, Paredes made them pay.

With 64 minutes gone, he was fed the ball in the centre circle, looked up and spotted right-back Alessandro Florenzi flying up the wing. A perfect pass turned the Barcelona backline and Florenzi was in the box, face to face with Ter Stegen.

LOOK at that ball over the top from Leandro Paredes 😍

PSG have scored three at Camp Nou without Di Maria and Neymar… pic.twitter.com/CnhMQGrtDg

Florenzi’s cutback was deflected and fell to Mbappe. Nobody was in any doubt about the outcome from there.

Any resistance that Barcelona had been proving until then was suddenly crushed like a Dorito under a steamroller and five minutes later Paredes was again central as PSG added a third.

A free-kick from 45 yards and nice crossing angle was won and the Argentinian midfielder delivered it with verve and dip, connecting with the head of Moise Kean.

It was the defining performance of Paredes’ stay in Paris. Given that his time there since his €40million move from Zenit St Petersburg has provided more downs than ups, it must have felt to a degree like redemption.

Thomas Tuchel never truly appeared to trust Paredes, often preferring Idrissa Gueye or Marquinhos at the base of midfield and brining in Danilo Pereira at the start of this season. As recently as January, Paredes was being talked about as a makeweight in a hypothetical deal to bring Christian Eriksen to Paris.

But since the arrival of Mauricio Pochettino, who reportedly wanted to sign his compatriot when still at Spurs, Paredes has been slotted into that deep-lying role that he plays for Argentina and is proving why he commanded that hefty transfer fee.

The most significant sign of Pochettino's impact on PSG might not be Mbappé's stupendous performance tonight, but the blossoming of Leandro Paredes as ball-winner, midfield strategist and key passer, which enables Verratti to be the creator he can be.

As well as using the position to take advantage of his passing range, Paredes’ role provides freedom to PSG’s two full-backs, who were the creators of the first and second goals in Barcelona, and to Marco Veratti, whose dexterity, distilled in his delicate assist for Mbappe’s first, is better utilised further forward.

“I feel good with Mauricio,” Paredes told reporters before the game. “I like our way of working together. I’m going to try to respond on the pitch and give my best.”

He certainly did that.

If setting up a football team is a question of finding the right balance, then Paredes is the man providing it for Pochettino’s PSG at the moment.

Come the summer, Messi will be hoping his international colleague can do the same as Argentina host the Copa America.