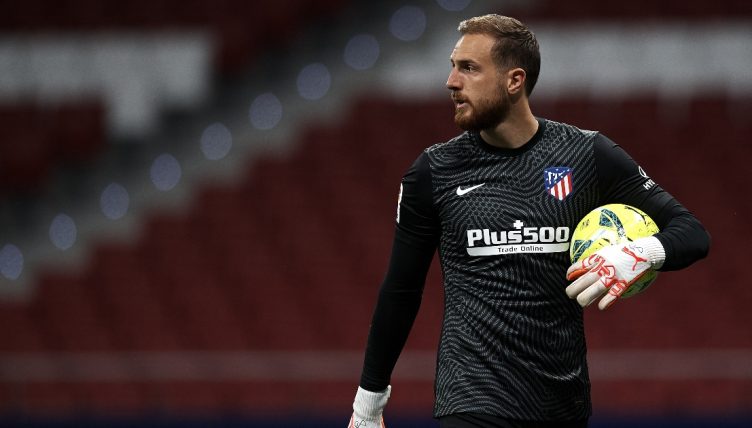 You could see from Diego Simeone’s reaction how much Atletico Madrid‘s 2-1 victory over Real Sociedad meant to him.

Atletico’s man in black, the touchline Tom Waits, was a bag of nerves as his men saw out a narrow one-goal lead against their toughest opponents remaining. All three points keeps them at the top of the La Liga table, on the cusp of a first league title since 2014.

Only title races that go down to the wire can create tension like this. He’d previously stated he’s too nervous to watch the matches of title rivals Real Madrid and Barcelona. No wonder he greeted the final whistle as if he’d won the lottery, running back to the dressing room with his fist in the air.

Simeone’s men have enjoyed an uninterrupted run at the top of the La Liga table since the ninth week of the season. But that came under serious threat approaching the run-in, with just five wins from 11 between mid-February and mid-April.

Unlike Barcelona, who are all but of the race after letting a lead slip twice in a 3-3 draw with Levante, Atletico have held their nerve at the final stretch with five wins from the last seven. When they travelled to the Camp Nou needing to avoid defeat to stay ahead, they did just that, not blinking first in a 0-0 draw.

Once again, Lionel Messi has been outstanding and is on course for yet another Golden Boot, having scored 29 goals (with a further nine assists) in Barcelona’s title bid. He nearly scored a goal for the ages against Atletico, a stunning solo run worthy of deciding a league title, let alone a match. But Atletico’s star man was equal to him.

The definition of world class™️pic.twitter.com/BBQMfAi2w8

Simeone could be seen miming every tackle his players were failing to make during his Messi’s run at goal, and he looked resigned to conceding once the forward had carved open the space to strike. He’d seen his Argentinian compatriot work his magic countless times before.

But he’s seen some impossibly good saves from Jan Oblak, and should have had more faith in his goalkeeper.

Oblak has established himself as one of – arguably the – best goalkeepers in the world during his seven years in the Spanish capital and it was no surprise to see him step up for the big occasion, denying Messi with a superb fingertip stop.

The Slovenia international had a famous and proud record of conceding the fewest goals in La Liga, four years running between 2015 and 2019. That record was broken in 2019-20 as former Atletico keeper Thibaut Courtois produced some stunning saves for Real Madrid, as they boasted the league’s best defensive record in their title victory.

Sir Alex Ferguson once said “Attack wins you games, defence wins you titles”; that’s certainly not proved to be the case in La Liga in years gone by, as Atletico’s miserly approach – focused on clean sheets – has often failed to yield silverware.

But it’s perhaps proving true in the past couple of years as Messi’s superhuman efforts in an otherwise flawed Barcelona side haven’t been enough to drag them over the line.

He registered 25 goals and 21 assists last term, and La Blaugranas scored 16 more goals than Real Madrid, but they couldn’t stop their old rivals from becoming champions.

For the first time since he was a teenager on the periphery of Frank Rijkaard’s side, Messi looks set to go two years running without winning the league.

Perhaps Ferguson could adapt his famous saying for the 2020-21 La Liga season, to give some credit to the man between the sticks. Because as defensively sound as Atletico have been, Oblak has been their standout individual.

Yet again he made the difference against Real Sociedad. He made six saves in the nervy 2-1 victory, three times as many as his opposite number, and has kept four clean sheets in his last six appearances at this crucial juncture.

Portu's volley into the ground is saved well by Oblak! 🖐

Atleti still on course for a vital win 🔴⚪ pic.twitter.com/glFEFY2WJz

Seven years on from Atletico’s last league title, Simeone has done remarkably well to build a completely different team. Only Koke and Jose Maria Gimenez remain from that squad.

Out went the likes of Diego Godin, Gabi, Raul Garcia and Diego Costa, with the likes of Stefan Savic, Saul, Marcos Llorente and Luis Saurez stepping up seven years on. But arguably the best piece of evolution has been going from Courtois to Oblak.

On an “expected points” table (per Understat) – extrapolated from xG results on a game-by-game basis – Atletico would be a distant fifth. They’re overperforming their xGA (expected goals against) by a rate of 11. Oblak has made 93 saves – no goalkeeper in the entire division has made more.

Attacks win games, sure. But in 2020-21, it may well be the case that it’s a goalkeeper that decides the title.