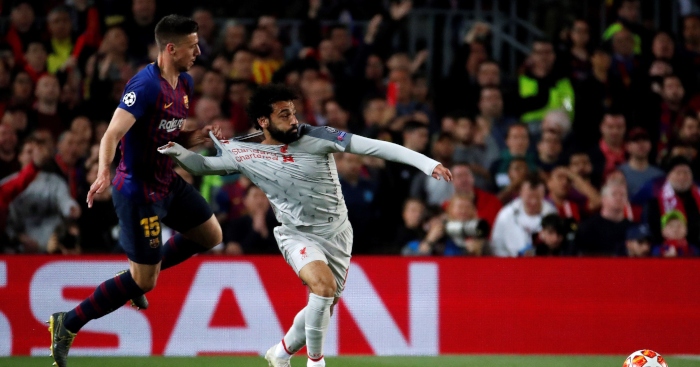 It’s never fun going up against peak Lionel Messi, but Mohamed Salah’s experience against the Argentine must have been that much more emotionally draining.

For 60-70 minutes of Liverpool‘s Champions League semi-final against Barcelona, Salah was a man on a mission. The Egyptian was chasing down every ball, showing hunger and passion to get the right side of his man and create openings out of nothing.

Then Messi decided he didn’t like the idea of someone else being the star.

Salah hasn’t quite hit the heights of his 2017-18 campaign – at least not as consistently – but he’s still been pretty damn good.

His omission from the Premier League team of the year is understandable when taking into account his struggles in front of goal when the votes were cast, but his recent resurgence feels like his way of throwing out a weeks-long “are you sure, lads?”.

A trip to Barcelona could easily have been a chance for his doubters to feel vindicated in saying he’s not one of the world’s best, with the ready-made excuse of Lionel Messi staring him down, daring him to ease off. So Salah worked twice as hard to demonstrate this is the stage on which he belongs.

Despite losing 3-0, Liverpool were very much in the game, and much of it was down to Salah’s persistence. Many will point to his late miss, which would have given the Reds plenty to work with in the second leg, but it’s frankly a travesty that everything in the final half-hour overshadowed a delicious moment in which Sergio Busquets was literally sat down by the visiting forward.

Barcelona rolled out the red carpet for Salah, but his response was to place a chaise longue at the end of it and invite them to take a seat.

He was at the heart of pretty much anything good produced by the visitors, from his low shot which forced a full-length stop from Marc-André ter Stegen to his run down the right which ended with James Milner powering a shot too close to the German goalkeeper.

We were watching a world-class player in action, running things for large periods and forcing accomplished players to play by his rules and no one else’s.

Unfortunately, though, there is now an extra stratum of footballer: we have good, great, world-class and Lionel Messi. If Salah had produced this kind of performance against a different team, one without Lionel Messi, then Liverpool would have won and we’d be talking about it for a very long time.

Thanks to Messi, we won’t be talking about this for anywhere near as long as we really ought to.

Arturo Vidal had his high points during the game, not least a late, saving tackle to deny Sadio Mané, but for this one moment he was in Salah’s world.

There was, dare we say it, something Messi-esque about the way the Liverpool man picked up the ball deep and burst with such nonchalance he almost encouraged the Chilean to nutmeg himself by proxy.

Perhaps this was why Messi stepped things up in the final 20 minutes. He wasn’t going to be upstaged on his home turf, not least by someone doing a more than passable impression of his own gimmick. And as long as Messi is on the pitch, he’s going to do all he can to make sure he’s the one stealing the show.

The closing stages of the game might have been an extremely loud chorus of “I’m still here”, but let’s not forget how much of an achievement it can be to get yourself into a position where such a thing is required.

Mohamed Salah in the opening 15 minutes at Camp Nou:

More take-ons than all other players combined. 🕺 pic.twitter.com/aSynedvu8c

The performance at Camp Nou was better than plenty of visiting players’ best ever display on the ground, yet Salah left the field with nothing to show for it.

Well, not quite nothing. His display certainly ought to worry Liverpool’s remaining Premier League opponents, Newcastle and Wolves, while a similarly fast start against Barcelona at Anfield could at the very least force Barça to worry for a split-second about a repeat of last season’s three-goal defeat at Roma which brought their elimination from the Champions League.

We’re a long way removed from that eight-game run without a single goal, while suggestions of the former Basel man being a one-season wonder – already ridiculous to think about – have been well and truly put to bed.

Barcelona v Liverpool was a contest for so long because Salah was on his game to the point that the home defenders had no idea how to deal with him, but a magic show that’s all set-up won’t draw David Copperfield levels of attention.

The important thing, though, is Salah is back to something approaching his best. It’s just a shame he showed up with an electrifying performance on an evening when Messi was waiting a few yards away, ready to cut the power.