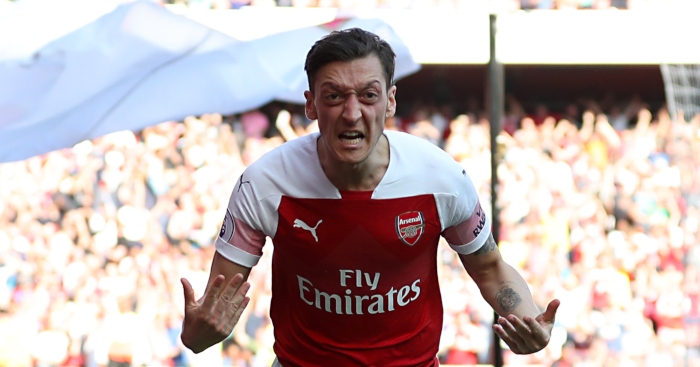 As Sunday night turned into Monday morning, Arsenal fans will have been busy avoiding anything which might remind them of their defeat to Crystal Palace.

While Game of Thrones fanatics spent the previous hours muting all mentions of the show on social media, Arsenal will have been doing the same with Shkodran Mustafi’s name in order to keep their Bank Holiday unspoiled for different reasons.

However, as soon as the dust settles on a potentially devastating defeat in their club’s pursuit of a Champions League spot, there will be one moment from the game which they might want to eventually watch on repeat to soothe the pain.

The impending departure of Aaron Ramsey, as well as the exits of Jack Wilshere and Arsène Wenger just under one year ago, have reminded Arsenal supporters that nothing is permanent in north London.

Yet with all the upheaval, it must have been a small consolation to find one constant in the form of Mesut Özil’s strike which briefly brought the hosts level in the London derby.

Özil might be another person to ultimately go from part of the furniture to someone spoken of in the past tense, but there have been moments under Unai Emery where he has reminded us why those at the Emirates have gone wild for him for years.

The goal looks unspectacular at first glance and outright confusing at second, as we try to figure out what’s going on with Palace goalkeeper Vicente Guaita.

Eventually, though, you realise it’s not a glitch from the keeper but rather a throwback from Özil himself, reminding us of a trademark finish which he brings out both more and less frequently than he perhaps ought to.

The ‘Özil Chop’, as it has become known, involves the German kicking the ball into the ground in a manner that makes it spin back up over an opponent (usually the goalkeeper, but occasionally the move is used to pass the ball).

It’s impressive almost because of its difficulty, and the balance between being effective and being nice to look at makes it a near-perfect encapsulation of both Özil and late-era Arsenal.

The former Real Madrid man has scored more traditionally aesthetic masterpieces, not least his winner against Newcastle United in December 2017, but there’s a sense he adopts the chop because it comes much more easy to him than to others.

If you had a trick which let you cling to being the best around at a single thing, you might overdo it too – just ask Carlos Vela.

There’s a fair bit of variance in Özil’s execution, even within the broader context of his trademark, but it largely involves goading the opposition goalkeeper into going to ground when they see him gearing up to get over the ball.

We saw this in the victory over Bournemouth, when Artur Boruc was the hapless goalkeeper on the receiving end.

When you’ve been playing football for 20 years, it’s rare for you to be presented with something you haven’t seen before, and yet Özil’s finish might well have been enough for the Pole to question everything he’d learned over the course of his long career.

There’s even a brief glance back at Özil after the ball crosses the line, as if that might help Boruc make sense of the situation. Spoiler: it won’t.

The alternate version – call it the chop 2.0 if you’d like – involves a more defined bounce between Özil’s connection and the ball hitting the net.

It’s something we saw in the Gunners’ 3-0 win over Chelsea in 2016, when a man of the match display was capped off by a finish which made Thibaut Courtois very ordinary.

While any goal can let a keeper know his team has been schooled by the opposition, this one lets Courtois know he has lost his individual battle with Özil – a battle he might not have even realised he was in until a second or two earlier.

Perfecting the chop is one thing, but continuing to pull it off when it has enough of a profile that some might be expecting it is another altogether.

Others should have the tools to pull it off, but none do so with anything close to the same regularity. The goal against Palace is akin to Bart Simpson observing the expectant eyes of his classmates, waiting patiently for them to let their guard down, and only then catching them unawares with a perfectly-timed “I didn’t do it”.

Özil’s charm comes from being able to do what no one else can, and this is no different. Does it matter that it’s the sort of thing which will only be responsible for a couple of extra points per season, if that? Absolutely not.