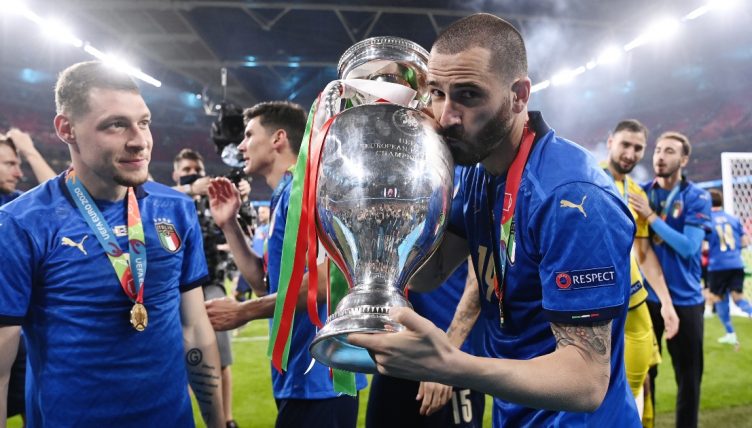 In October 2012, Leonardo Bonucci punched an armed mugger in the face and chased him down the street; so it was no surprise to see him at his best for Italy during a hostile Euro 2020 final against England.

When human beings are confronted with hostility, it triggers a fight or flight response. Many of us would be shaken by the jeers of over 50,000 England fans. Many of us would also immediately hand our watch to any gunman demanding it.

It is quintessential fight or flight and usually, it changes from situation to situation.

But Bonucci is different. Bonucci is a man who always chooses to fight. As the boos rained down during another impassioned rendition of ‘Il Canto degli Italiani’ the 34-year-old fixed his stare dead ahead. We’ll never know what exactly he was looking at. Perhaps he was trying to stare down an entire country.

The hyperbolic pearl-clutching from some over the booing of national anthems descended into dizzying boredom at times over the past week. However, a glance at Bonucci as he and his teammates gave their climactic roar before the game showed that maybe they had a point, even if it was not the point they were trying to make. The boos, triggering a dopamine rush in Italy’s gladiator, might have backfired.

Even the fastest goal ever scored in a European Championship final could not dent his spirit. In the 67th minute, Bonucci was the most alert man on the pitch, pouncing on a loose ball in the England penalty area to equalise and charging towards the pocket of Italians inside the ground, his iconic “wash your mouth out” celebration already in full flow.

While the attention pre-match rightly focused on Jorginho’s passing qualities within the Azzurri, it was Bonucci who started to dictate; a stunning lofted ball for Domenico Berardi that almost resulted in the winner the cream of the crop. A pass success of 89% his reward.

So to penalties. While Andrea Belotti faltered, Bonucci delivered just as he did against Spain, slotting past an imperious Jordan Pickford. Then Bukayo Saka stepped up and, well, you know the rest.

If his bellowing of “It’s coming to Rome” in the following celebrations did not give you a sense of how much Bonucci was revelling in his party-pooper role, his post-match interview might.

“It’s a unique pleasure,” he told an Italian broadcaster.

“I’m sorry for the English fans but it was very nice to see them leaving the stadium. They all thought it was coming home, but it’s coming to Rome. Very nice to see, indeed.”

Nine years ago the man-mountain was reduced to tears in Kyiv’s Olympic Stadium as Italy were brutally beaten by Vicente del Bosque’s legendary unit in the final of Euro 2012, a rare occasion when Bonucci perhaps let the occasion get the better of him.

But four months later, a mugger found out the hard way what happens when you treat the defender with hostility. His deadly stare during the Italian national anthem against England now easily perceived with a sense of foreboding.