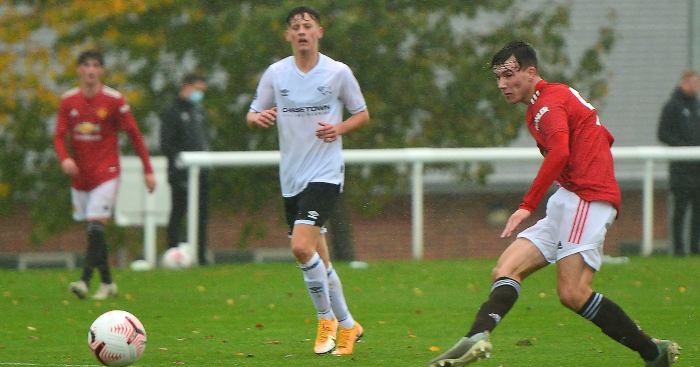 While some clubs produce a great player once in a blue moon, the talent just keeps rolling off Manchester United‘s conveyor belt.

It seems like only yesterday when an 18-year-old Marcus Rashford burst onto the scene with a brace against FC Midtjylland on his first-team debut.

Rashford followed that up with a brace against Arsenal three days later and didn’t look back, developing into one of the best forwards in the Premier League.

While he continued to impress during his first two years in the first team, the focus soon began to shift to the new kid on the block.

Like a discarded PS4 at Christmas, Rashford was no longer the shiny new toy and Mason Greenwood started to make waves with his goalscoring exploits in the academy.

Greenwood is one of the best natural finishers United have produced and his style of play immediately drew comparisons to Robin van Persie.

He made a seamless transition into the first team, scoring 17 goals in all competitions during a remarkable breakthrough campaign in 2019-20.

While these remain early days in his fledgling career, the 19-year-old could get a taste of his own medicine over the next few months.

Charlie McNeill was part of United’s academy alongside the likes of Greenwood before making a surprise move to local rivals Manchester City in 2014.

He established himself as one of the most formidable young strikers in Europe during his time at City and is credited with 600 goals at youth level, including 110 goals and 38 assists in 72 games for their Under-15s. Yes, you did read that correctly.

Looking to rectify their mistake, United fought off competition from Juventus and RB Leipzig to bring the highly-rated forward back to Old Trafford for an initial fee of £750,000 in the summer.

This was his goal against them last year for Man City 💥

After losing Jadon Sancho to Borussia Dortmund in 2017, City appear to have let another brilliant talent slip through their fingers.

The 17-year-old has made an immediate impression in his second spell at United, netting a brace on his debut for the Under-18s in their 4-0 win at Derby County.

According to the Manchester Evening News, United sources claim that the striker has also been “ridiculously good” in training sessions. And his recent performances for their Under-18s have only enhanced his reputation and helped to show what all the fuss is about.

During their 4-3 win over Liverpool, McNeill brought a cross under control before unleashing a driven shot past the goalkeeper and into the far left corner. If you hadn’t already gathered: he certainly knows where the net is.

Like Greenwood, McNeill also has an array of inventive finishes in his locker, from poacher’s goals to long-range screamers.

Having already scored a panenka penalty and celebrated with an excellent piece of shithousery against Leeds Under-18s, McNeill then doubled United’s lead in the 45th minute.

He raced onto a long ball and showed great composure to go around the goalkeeper before nonchalantly dinking it into the back of the net from a difficult angle.

This is the strike of a player who realises he’s already far too good for this level and wants everybody else to know too.

The composure from Charlie McNeill 👏🔥 pic.twitter.com/SQExK2zdhT

He now has six goals in his first seven starts for the club and will have surely caught the attention of Ole Gunnar Solskjaer, who knows a prolific goalscorer when he sees one.

The prospect of a front three of academy products in Greenwood, McNeill and Rashford is a tantalising prospect for Solskjaer and will give United fans hope for the future.

Greenwood is understandably regarded as the next big thing in English football, but United may also have the rival to his throne. Now that’s just plain greedy.