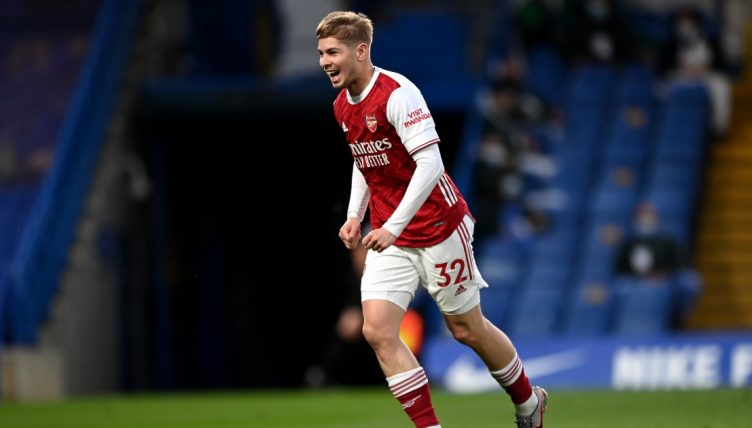 People only exposed to football through the occasional television advert could be forgiven for thinking that skills and tricks are approximately 70% of the game.

Every second summer companies such as Nike and Adidas recruit star players to bewitch audiences with a succession of rabonas, elasticos and stepovers.

More regular football watchers are aware that the majority of action during a match is a lot more prosaic.

Passages of play are dominated by passing the ball, moving and squeezing the life out of the opposition with a high press.

Yes, he scored Arsenal‘s winning goal at Stamford Bridge after taking advantage of Jorginho’s farcical backpass and the presence of Kepa Arrizabalaga in the Chelsea goal.

But more importantly, it’s clear to us that the 20-year-old is fast becoming Arsenal’s nutmeg king and should be celebrated as such.

Arsenal needed to defend resiliently in the second half, as Chelsea belatedly woke up and started to apply some serious pressure.

In other words, it was a time for discipline and concentration as Mikel Arteta’s team looked to their first league double over Chelsea since 2003-04.

Smith Rowe had other ideas. Collecting the ball inside the opposition’s half, the midfielder brushed past Cesar Azpilicueta and Reece James with ease and ran directly towards goal.

The imperious Thiago Silva stood in his way. When you’re as highly regarded as Silva, your reputation almost begins to do half the work and intimidate opposing attackers before the match has even kicked off.

But no self-respecting youngster has respect for authority and Smith Rowe proceeded to violate the decorated Brazilian by slipping the ball through his legs before running around him.

Cynics would say the move broke down almost instantly after, making the nutmeg an indulgent moment rather than a productive one.

These people would need to lighten up. Smith Rowe is currently playing without fear which, considering that Arsenal’s plight would inhibit many footballers, is something to be both applauded and encouraged.

There’s a reason he’s fast becoming Arsenal’s nutmeg king after all. Against Chelsea in December, Smith Rowe marked his first Premier League appearance of the season by putting the ball through the legs of a humiliated N’golo Kante.

Then, during last month’s spanking of Slavia Prague, he provided the assist for Arsenal’s opener with a nutmeg that elicited something close to a purr from the watching Martin Keown. Now Thiago Silva has become his latest victim.

Any footballer who can treat playing against the Champions League finalists like they’re shooting an advert for Nike deserves our respect.