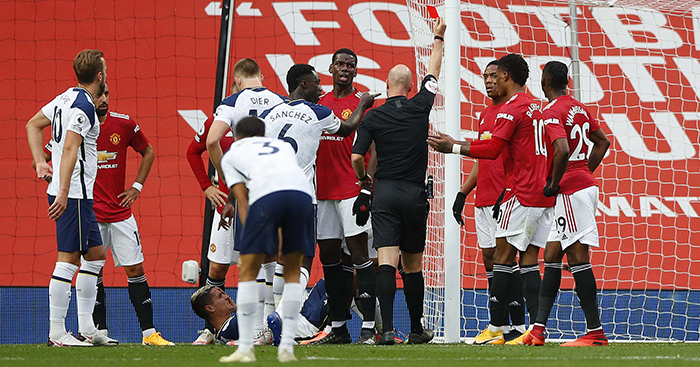 On the day that Anthony Martial was shown a straight red card for the softest of slaps on Erik Lamela, it just so happens that exactly 25 years previously something rather more brutal took place in Argentina.

Martial will serve a three-match suspension for brushing Lamela’s face and, with the risk at sounding like yer da, we can’t help but feel that’s a bad mad – especially as Lamela shoved an arm into the Frenchman’s face first.

As Louis Saha brilliantly said, “I would have hit him properly”.

But while we’re not advocating footballers throwing punches, we’re also not not advocating it. After all, as much as commentators might like to pretend otherwise, we really do love to see it. And Saha does kind of have a point: if you’re going to get sent off and miss three games, you might as well make it count.

Which, presumably, is what Flavio Zandona was thinking exactly 25 years to the Martial-Lamela incident when he too was provoked, by a slap in the face from the always-controversial Edmundo in a game between Velez Sarsfield and Flamengo in Argentina in 1995.

It was a decent slap from Edmundo be fair, but what’s most impressive is how quickly Zandona reacted. The two had clearly been exchanging some choice words, but whereas some players’ immediate reaction would be to hit the floor clutching their face, Zandona’s was one of retaliation.

But perhaps he reacted too quickly. It was more of a shove than anything else, and though Edmuno made the most of it, Zandona clearly didn’t think justice had been served. So he thought he’d have another go at it.

And, well, we won’t spoil it for you, but let’s just say he was rather more successful with his second attempt. Graeme Souness said Lamela’s reaction to the Martial slap was “very Latin”…he clearly hadn’t seen this.