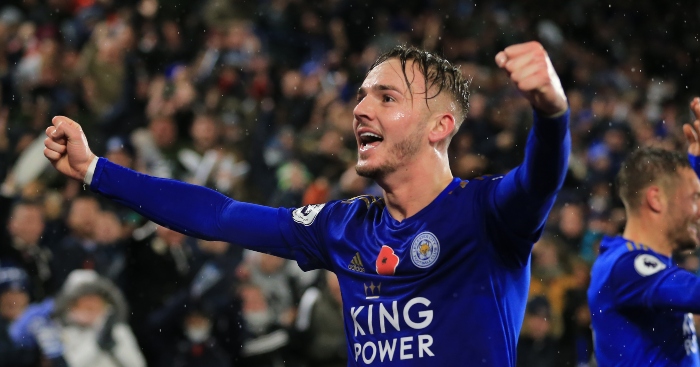 Leicester City are playing with the unabashed confidence of a team who know they deserve to be in the Champions League positions, and there’s no better illustration of that than James Maddison.

The England midfielder has received heat for assumptions of arrogance, and the easy way out of this would be to take a lower profile and retreat out of the public eye.

It’s certainly tougher to take the other route, namely attempting to justify your levels of self-confidence by repeatedly delivering on the pitch. However, as Maddison has shown, it’s undoubtedly more rewarding when you get it right.

In previous years, a meeting between Arsenal and Leicester would not have had the dynamic we saw at the King Power Stadium.

Even on those occasions where the Foxes were the in-form team, there would often be a level of deference to their opponents to the point that the London club received openings without necessarily earning them.

This time, though, Leicester knew exactly where they stood, and Maddison was a big part of that.

No Premier League midfielder can better Maddison’s three shots per game this season, while he’s eighth in the league for key passes and 11th for dribbles per game. He’s also the fifth most-fouled player in English football’s top flight.

“I thought we were excellent to a man, as we have been all season. We sent a big statement out there"

By the time he doubled Leicester’s lead, Maddison had already come close once, sending a free-kick out of Bernd Leno’s reach but watching it land just the wrong side of the netting.

Was this cause to ease off or shy away? Don’t be stupid.

When Jamie Vardy collects the ball on the edge of the Arsenal box, Maddison is already screaming for it, with such intent that it’s enough to make us wonder whether he added “scream for the ball in the 75th minute” to his to-do list before the game had even kicked off.

It’s part intent, part absolute certainty: a man convincing himself the earlier incident was a sighter rather than a miss: he was simply getting a feel for what was required to beat Leno and find the net. Rather than treating each moment as it comes, he was using each one as part of a whole.

Unlike the first effort, though, there’s no time here to set himself or even to look up. All of that needs to take place while the ball is still at Vardy’s feet.

Unlike the beauty of a curled free-kick, like the one he converted earlier in the season at Southampton, there’s an ugliness to Maddison’s execution here. The shot is neither driven nor curled, blasted nor shaped: it’s simply delivered where it needs to go with a minimum of fuss.

James is a bit like Philippe Coutinho — they’re players who are recognised for their talent,” Leicester manager Brendan Rodgers said of his No.10 in an interview with The Athletic.

“But then to maximise that talent, in order for them to participate in the game at the highest level, they also have to be able to contribute to a press.

“Of course, James has his strengths, so you let him flourish with those strengths. But then we helped him with the tactical discipline. And he’s becoming very, very good at it.”

As Rodgers has quickly learned, it’s about finding the balance between indulging a player and reminding him of his wider role within the squad.

However, with someone whose talents are so noticeable, it must be tempting to err on the side of the former – especially when you see him deliver a finish as perfect as the one at St Mary’s.

Getting the crowd off their seats is important for any attacking player, but Maddison often looks as though his default position is one of waiting, back arched and fingers cupped to ears, to receive their adulation.

Maddison is the kind of player who seems empowered by his own confidence, as if the wider the grin on his face, the greater the level to which he feels he must elevate himself.

While the Coutinho comparison fits him stylistically, there are parallels with Eric Cantona in this self-fulfilling excellence. By remaining part of a more productive whole, his individualism can shine through, while those around him can be equally empowered by his excellence shining through.

It’s no coincidence that it’s working so well.