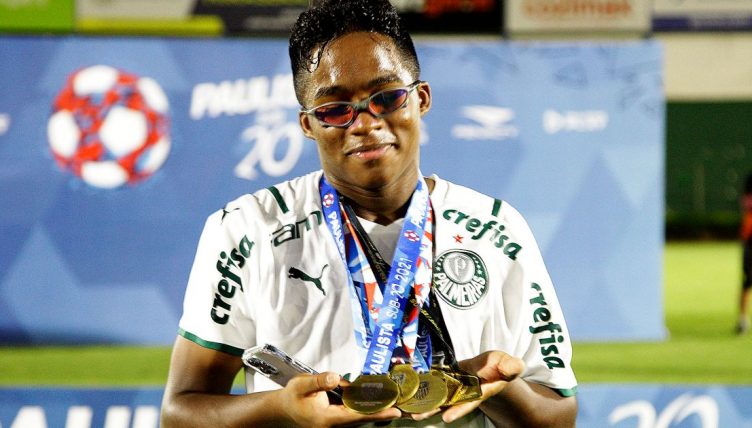 “Golacooooooooooooo,” screamed the commentator on Brazil’s SporTV at about quarter to one on Saturday afternoon. “Endrick, golacoooooo.” And for once, a Brazilian television football commentator was understating things a little.

Almost every year at the Copa Sao Paulo de Futebol Junior, there is a goal from an emerging superstar that reverberates at least around Brazil, if not the footballing world.

In 2022, this was it. Fifteen-year-old Endrick is Brazil’s latest emerging superstar. And as if Vinicius Jr was yet old enough to be the ‘old’ anything, Endrick has already been dubbed  the ‘new Vinicius Jr.’

But, it seems, the tag is for good reason. The goal was testament to both his ability and attitude.

With nine minutes of the 90 to go and Palmeiras 1-0 up, Endrick could have waltzed around the field and done a few tricks and flicks. Instead, he closed down the Ariquemes defenders like a greyhound chasing a rabbit.

He intercepted the ball and then in one surgically precise movement span, knocked it past his man and surged into the area.

He flicked it around one side of the next defender and ran around the other – the half-moon, they call it in Brazil – then with just a ‘keeper to beat, Endrick opted for the noblest of finishes, the calm, unflinching dink over the advancing goalkeeper.

Romario would have been proud to call the goal his. And most importantly, Endrick had done it on this stage. The Copa Sao Paulo de Futebol Junior. The Copinha. The world’s greatest youth football tournament, if you want our opinion. The launchpad for dozens of glittering careers.

The Brazilian football season runs from February to December. And as it’d clearly be an affront to the nation to have an entire month go by without football, January is taken up by the Copinha.

One-hundred-and-twenty-eight teams from Brazil and other South American nations descend on the state of Sao Paulo for an Under-20 tournament (or Under-21 in 2022, to make up for the fact it was cancelled in 2021).

It is broadcast live on terrestrial TV and the final is played out in front of 35,000 at the iconic Pacaembu stadium in the state capital.

Every year, there is a player who uses it to imprint their name on the collective consciousness. In 2017, it was Vinicius. In 2019, it was Antony. This year, it appears to be Endrick.

And with just a minute to go against Ariquemes, Endrick confirmed the suspicion that he’s something special with another strike that was not quite as good as the first but would still have you reaching for your pen to write home about.

Yet for those who were really paying attention, the name Endrick – a misspelt tribute to the Newcastle midfielder Jeff, we imagine – will be nothing new.

For months, years perhaps, international scouts have been circling around a player who performs way beyond his years.

In 2017, Endrick scored a quite ridiculous bicycle kick in front of a significant crowd at Santos’ Rei Pele training ground before getting another in the return leg at Allianz Parque to win Palmeiras the Under-11 Sao Paulo state championship and gain his first little taste of fame.

He scored at least one goal during the tournaments at each age level, becoming the first player to do so in a single year, and took home winners medals for the Under-15s and Under-20s.

In his latest step up, making his debut for the Under-21s at the Copinha, he scored twice on his debut against Assu and followed that up with the above brace against Ariquemes.

Was the ease with which he made the step a surprise? Not to the boy himself. Asked by Globo whether he expected to start the year so well, he replied: “To be honest, I imagined I’d start well, yes. I worked the whole of 2021 for this moment and knew that if I was concentrated and determined, I would arrive ready.”

That confidence is born of a very impressive record. The two against Ariquemes were his 166th and 167th goals in 170 games at all ages for Palmeiras.

And those scouts are closing in, it seems. Unfortunately but inevitably a report has emerged linking him with Manchester City, Manchester United, Liverpool, Real Madrid and Barcelona.

Endrick is still well off the age at which an overseas move would be possible though. He’ll turn 18 in July 2024 and can’t even sign a professional contract with (or play a senior game for) Palmeiras until he’s 16 in July this year.

After that, the club that has nurtured him will have two years to try to turn him from youth sensation into effective first-team footballer.

For now, though, we’ll enjoy watching him do his thing right where he is. The excitement is real and this is the Copinha is the stage on which to excite. Let’s just hope it’s not another case of too much, too soon.