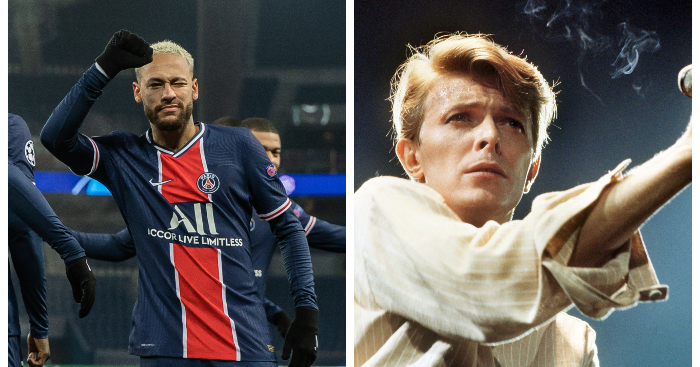 In 2016, NME published a list of David Bowie’s greatest songs. It is the sort of list that will be replicated for Neymar upon his retirement only with gorgeous goals replacing stunning songs.

Hits that missed out on that top 20 list, published after the singer’s death, included iconic tracks such as Moonage Daydream, Rebel Rebel, Modern Love, The Jean Genie and Fame.

You cannot help but feel that Neymar and his mountains of outrageous goals are destined for a similar fate when the archives are ordered in the years after his eventual retirement.

The Brazil international rose to become one of the world’s best by conjuring the outrageous from thin air, and that is clearly how he plans to stay there. He may not have won a Ballon d’Or yet, but if there were an award for footballing artistry, he’d win it every year.

Both teams walked off in a show of solidarity.

The following night saw the sides return, with a fresh set of officials in place, and while it is crucial to never forget how far football still has to go when it comes to tackling prejudice, we all needed a reminder of why we love the game.

Who better to provide that than Neymar?

Since emerging as a Youtube sensation following his ludicrous, Puskas-winning solo run and strike for Santos back in 2011, entertaining football fans has been top of the forward’s list of priorities.

His first strike on Wednesday night almost made you want to reach for the Cilit Bang. It was pure filth. Vile. Stop that, Neymar. Have a bath. All modern-day cliches for a ridiculous goal were applicable here.

After just 21 minutes of the rescheduled fixture, the Brazilian made Carlos Ponck question whether football was really for him, turning and nutmegging the Cape Verdean in a frankly ludicrous brushstroke of a flick. I dread to think what reaction it would have summoned from Ally McCoist.

Neymar is just so, so good. pic.twitter.com/jGF30Ws1Cn

There was plenty of work still to do for Neymar. On the edge of the box with defenders closing in from all directions, it would take something special to find the net from here.

But this is Neymar we are talking about. The man has performed more ball-based trickery than a poorly treated sealion. The quality of the strike emphasised by Mert Gunok’s refusal to even attempt a save. That the 28-year-old went on to complete his hat-trick that night almost seems secondary in the shadow of that early magic show.

Somehow, it is a strike that is likely to be Neymar’s own Moonage Daydream. A victim of its creator’s own genius when it comes to creating stunning sensory experiences. Fitting that he put on such a spectacle just a day before the 25th anniversary of Bowie’s famous Bastille show in Paris.

So many of Neymar’s 105 goals for Barcelona were exceptional, either from a solo perspective or through the link-up play between himself and any number of world-class talents, and he has only carried on that form in France.

Much like Bowie’s hits, when, in 10 years or so, we are looking back on Neymar’s career and ranking his 20 best goals, none of us will come up with the same list. With so many works of art, it is a mathematical impossibility.

This article was originally published in December 2020.