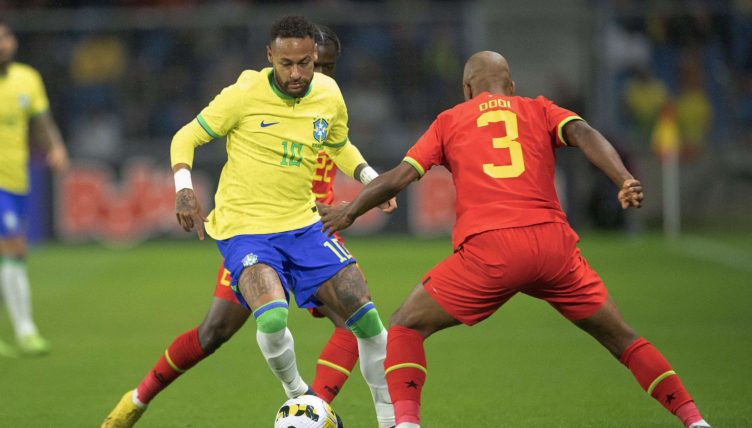 “When I’m 100% [physically] and happy playing my football, it gets difficult for opponents,” Neymar said after Brazil had beaten Ghana 3-0 in their penultimate game before the World Cup on Friday night.

While the words might come across as a little arrogant when written in black and white on this page, they were merely a statement of fact.

Neymar had been at his best in the Stade Oceane in Le Havre and it was difficult for the Ghanaians. In fact, all they could do in a vain attempt to stop him was resort to cynical fouls.

Neymar set up two of Brazil’s three goals against Ghana.

His turn and pass to Richarlison for Brazil’s second and the Tottenham man’s first of the night was magnificent. The whipped free-kick for Richarlison’s second and Brazil’s third was pinpoint and pretty much undefendable.

But Neymar’s threat was best summed up by a subtle little moment just a few minutes before Brazil’s second goal that left Ghana right-back Denis Odoi kicking a leg into thin air like a Parisian cabaret dancer.

Neymar picked the ball up on the left, up close to Vinicius Jr, with whom he combined beautifully all evening.

He looked up and started to move forwards, Vinicius advancing to his left. Neymar first beat the challenge of Kamaldeen Sulemana and was then faced with the experienced Club Brugge defender Odoi.

So on his game was Neymar, though, he didn’t need to do all that much to scare the shit out of the former Fulham full-back.

In fact, with one little glance in the direction of Vinicius Jr, Odoi was confounded, poking out a leg and stumbling backwards as Neymar waltzed past him.

While the pass to Vinicius and the Lucas Paqueta shot that followed it may not have yielded any material results – the ball zipped narrowly past the upright – this was a show of strength from both Neymar and Brazil.

The PSG man, after being so widely ridiculed at the 2018 tournament in Russia, clearly means business at Qatar 2022.

And with the team he has around him now, the piss-taking PSG star may well stand a better chance of lifting the World Cup than he did four years ago.

Yes, it was his look that befuddled Odoi here. But it would not have been possible without Vinicius’ presence.

The mere fact that the Real Madrid man was offering Neymar an option to his left already had Odoi in two minds, even before Neymar’s clever little look and shimmy in the other direction.

And with Raphinha, Richarlison, and the aforementioned Paqueta also on the pitch for Brazil, there were often just too many attacking outlets for Ghana to deal with.

I am at Brazil against Ghana, where Vinicius has just passed to Neymar and Neymar passed to Vinicius and Raphinha tried an overhead from Vinicius' cross, and I'm reminded that football is better when Brazil are good.

Some might say it’s a brave – possibly even stupid – set-up for Tite to play. With all that attacking talent, might Brazil be too easy to play through against better opposition?

Well, not if Neymar has anything to do with it.

After the game on Friday night, Neymar added to those comments about his own form, saying: “I went to [my team-mates] in training yesterday and said that this is a team that people see as attacking, like it or not, with four forwards and Paqueta.

“I told them that, if we want to play like this, play together, we need to help each other out. To help the defensive line as well. Everyone has to run.

“It’s delicious to see that [happening on the pitch]. Nobody has any vanity here, it’s a team without vanity, with harmony.”

And as well as all the attacking zip and verve they showed in Le Havre, Brazil’s players fulfilled that part of the deal as well.

They didn’t press high, but Ghana could not play through them at all. Neymar was even seen snapping into tackles as the second half wore on.

So, that bit at the top of this page might have sounded cocky, but Neymar is right. When he’s happy and fully fit, there’s not much you can do to stop him. The same could be said of this whole Brazil team.