Neymar made Atalanta’s arses fall out with two perfect nutmegs 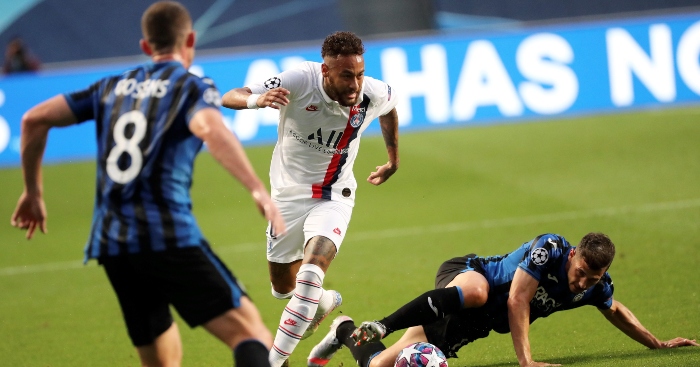 Everything you know about Neymar identifies him as an automatic villain, yet his performance in PSG’s Champions League victory over Atalanta made it very difficult to keep viewing him in that way.

As the record signing of one of the richest football clubs ever, his evil is essentially innate, and schadenfreude in the face of his early misses is the natural follow-on from such an image.

However, the way in which he helped drag his team back from the brink, trusting his own qualities to produce a comeback that wasn’t just dramatic but fun, was almost enough to make you forget the overarching narrative.

After missing PSG’s last two Champions League exits through injury, unable to contribute in the second legs against Real Madrid in 2018 and Manchester United last year, the Atalanta game finally offered him an opportunity.

His seven shots were almost as many as Atalanta managed as a team, while his 15 dribbles represented the same number as every other player from both teams combined.

Make no mistake, this was The Neymar Show in every conceivable metric, but it wasn’t just about the numbers: he was also out there embarrassing opponents for the fun of it, as Mario Pasalic found out barely a minute after opening the scoring for the Italian side.

In rolling the ball through Pasalic’s legs, Neymar makes sure the midfielder knows what he’s just done.

It doesn’t matter that the game is being played in Lisbon rather than Paris; this is still ‘Neymar’s house’ by any meaningful measure, and he’s making sure his opponent knows that.

He isn’t showboating as an alternative to taking things seriously; the showboating is the point. He doesn’t want Atalanta to continue taking on PSG on their own terms, and by reducing the game to a good vs evil narrative he’s able to almost single-handedly grind down a group who consider it not just their physical task but their moral duty to prevent him getting his own way.

There’s an idea of European superclubs as almost robotic, that they’re ‘bad guys’ in an almost formulaic way.

We see this in the routine way PSG have blown away some of their domestic rivals, and in the way players like Edinson Cavani have hit goal after goal in Ligue 1 and against lesser Champions League teams. However, Neymar has always pushed back against that.

Sure, there will be occasions where he takes a direct route, but he also refuses to reject the element of fun which brought him to football in the first place.

The formulaic wins are only exciting if you can have fun in the process, and the joy of a struggle for glory still needs to be tempered with an ability to enjoy your own moments on the pitch.

This is why, early in the second half, an unchanged scoreline wasn’t enough for PSG’s No.10 to deviate from running the game in a way that repeatedly reminded them what they were up against.

It’s why he reinforced the stylish bullying – the kind that makes you envy the bully as much as you resent them – in the form of a second nutmeg, this time on Maarten de Roon.

It’s the kind which forces an opponent’s stomach to drop, requiring them to go back and collect it from the turf as soon as a referee’s whistle gives them a tiny bit of respite.

It’s a reminder that Neymar has a monopoly on fun, and you can only have yours when he doesn’t need it any more.

Neymar with another sleek nutmeg 🔥

The irony is we wouldn’t be talking about any of this if PSG hadn’t turned things around in the final minutes, going from a 1-0 deficit to a 2-1 lead at the drop of a hat.

The French side have had plenty of similarly entertaining players on their books over the last 20 years, such as Jay-Jay Okocha, Ronaldinho and Hatem Ben Arfa, but all three often get spoken about more for their achievements away from the French capital.

Neymar’s fate might still be in the balance in that respect, but his part in the two goals – an assist for Marquinhos’ equaliser, and an inch-perfect through-ball for Kylian Mbappe to lay on Eric Maxim Choupo-Moting’s winner – means he still has an opportunity to generate a career-defining moment in a PSG shirt.

You can root against PSG as much as you like, but there’s no denying Neymar’s performance against Atalanta was an example of football how it’s meant to be played.