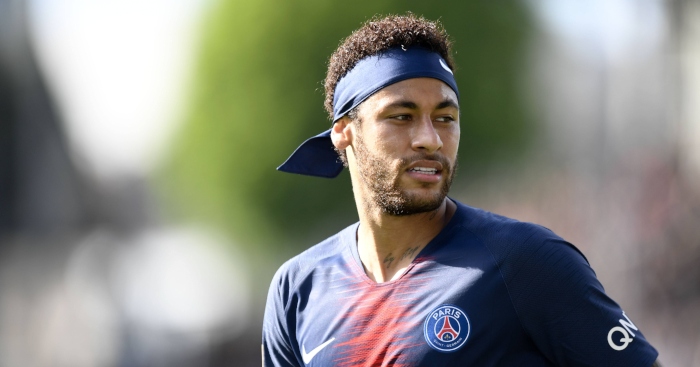 It feels like we haven’t heard a great deal about Neymar in the 2018-19 season, at least compared to previous years.

The Brazilian has continued to lead the line for Paris Saint-Germain, surpassing the 25-goal haul of his debut campaign with time to spare, but PSG’s disastrous Champions League exit at the hands of Manchester United means he has had to do his thing away from the spotlight.

It seems as though he has noticed this too, responding by treating us to the kind of thing that reminds us of his status as one of the world’s top players… just in case we had forgotten.

PSG wrapped up the title in mid-April – incidentally, on the day Neymar returned to action after three months on the sidelines.

Cynics might argue the drop-off in form in the preceding weeks was a deliberate ploy to allow the star of the team to join in with the celebrations, but if that was the case then you’d imagine a 5-1 loss at Lille was laying it on a bit thick.

They went on to lose the French Cup final after wrapping up the title and then took only one points from their next two league games, but they were victorious against Angers at the weekend at least, with Neymar on the target.

His header was the third goal he has netted since returning to action, but the highlight of his performance – the moment which reminded us of his quality – would come later.

After 89 minutes of attempting to deal with Neymar, Edinson Cavani, Ángel Di María et al, Angers defender Vincent Marceau must have had half an eye on the clock as the final whistle approached.

At the very least, he’ll have been pleased to see team-mate Farid El Melali arriving to lend some support, encouraging him to stand firm against Neymar and keep him in the corner.

The Frenchman is doing what any defender is taught to do in this situation: limit the space afforded to your opponent, forcing him to either play the ball back to retain possession or try something ridiculous and unrealistic in an attempt to forge a path towards goal.

All well and good if your opponent isn’t Neymar, but on this occasion Marceau has drawn the short straw.

Even a dubious whistle from the referee isn’t really enough to save him from embarrassment – after all, you know when you have been made to look the fool, and no amount of decisions going your way will be enough to un-burst your pride.

There’s a brief moment, as El Melali approaches, when the two defenders visibly exhale, preparing themselves to attempt to prevent Neymar keeping the ball in the corner.

PSG are still a goal to the good, after all, and simply outnumbering the Brazilian doesn’t guarantee Angers will regain possession and push for an equaliser against their 10-man opponents.

Neymar knows this too, however, and he knows there will be a brief flicker of expectation that he’ll do the sensible thing, preserving his team’s narrow lead as the final seconds tick away. It is at this moment, though, that he spots his opening. His aim has always been to one-up himself, using defenders as props in his play-within-a-play, and this is no exception.

Sometimes, as a defender, you’ll respond to a piece of skill by chasing back to regain possession, or simply chop down your rival in a fit of frustration. Neymar knows this, and – after the last year and a bit – would probably like to keep his ankles and metatarsals intact.

This is what inspires him to go one step further, outdoing the Angers defenders to the point that they can’t even attempt a tackle or a foul, instead simply raising an arm as if to say “this is unfair in a way we can’t quite pinpoint”.

If Neymar had gone for a rainbow flick, we’d at least be able to simply explain the manner in which he beat the two defenders. Instead, though, he has opted for a flourish which doesn’t have a name, almost willing us to think longer and harder about the moment of genius.

It’s as if Neymar has turned a quadrant of the pitch into a set of scales: as he lifts the ball above the head of Marceau, the defender’s stomach falls in proportion. The higher the ball rises, the more the defender wills a sinkhole into opening up to consume him.

Ultimately, the decision goes Angers’ way, with referee Florent Batta blowing his whistle much to the chagrin of Neymar. It’s likely Batta has ruled that the ball dropped out of play before being collected by the PSG man, a contentious call in its own right, but equally it could just be his way of scolding Neymar and warning him not to be so mean.

Neymar has done everything within his power this season – PSG’s European exit was out of his hands – but a return of 26 goals from 33 games is enough of a reminder that, just because he hasn’t dominated the worldwide narrative, he hasn’t become any less important.

Even when there’s nothing on the line, we can recognise the value of doing something which few others are capable of.

Now we just have to hope he has the opportunity to do it on an even bigger stage next season.