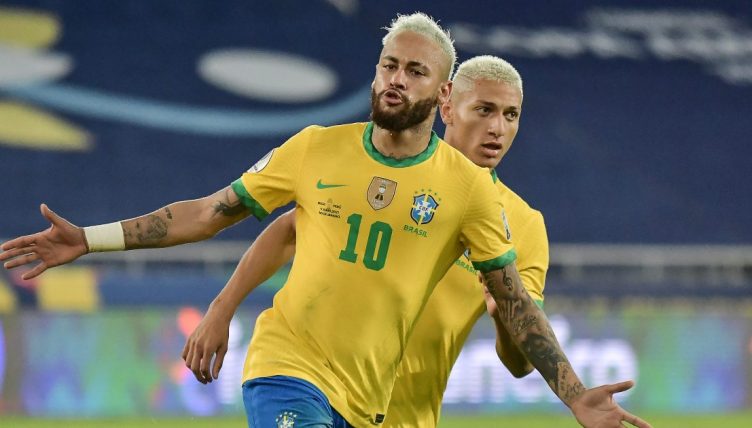 There’s an argument that football has become more methodical over the past few decades.

The evidence for this is everywhere. From wealthy western European nations creating battery farms of young footballers, the academy system that creates technically perfect automatons, advances in personalised nutrition and exercise programmes to tactical systems that favour the collective over the individual.

While the standard of play in elite competitions has never been higher, it can sometimes feel like we’ve lost some of the unpredictability that makes the sport so alluring.

Neymar represents both sides of the coin.

Yes, he plays his club football for Qatari-backed PSG and has the sort of personality that makes your dad’s face redden with helpless exasperation.

But the 29-year-old is also never afraid to showcase the kind of skills that instantly brings cult video game FIFA Street to mind.

While Neymar is one of the most effective attacking players of his generation, scoring goals and acting as talisman for club and country, his legacy seems destined to be as the prime subject of one of those YouTube compilation videos where assorted pieces of skill are played out to a soundtrack of heavy German techno.

As Brazil reluctantly hosts the Copa America, Neymar appears determined to contribute yet more source material for his legions of fans.

Having won their first group game against a COVID-stricken Venezuela, Brazil prepared to face Peru in Rio de Janeiro in a match that acted as a repeat of the 2019 Copa final.

The circumstances favoured Brazil – they are undoubtedly the strongest team in South America, while Peru have declined since their performances briefly entranced the watching neutrals at Russia 2018.

And Tite’s team tore into their opponents with the relish of a recently-released hostage being introduced to a portion of salt & pepper chips.

Alex Sandro gave Brazil an early lead, and Neymar doubled the advantage midway through the second half with a low shot from the edge of the penalty area.

The PSG forward was a menace throughout. Peru were simply not sharp or quick enough to deal with Neymar’s slight of foot and enviable balance and he drove Brazil on.

With the game essentially done and dusted, Neymar turned his attention to his ruthless side hobby: humiliating his opponents.

🪘 NO RITMO DO NEY! ⚽️#VibraOContinente

With the ball at his feet, and clearly feeling in a generous mood, Neymar decided to treat three Peruvian defenders to his set menu of futsal trickery.

First, Celta Vigo’s Renato Tapia was debased by your bog-standard nutmeg. Tapia appeared to wrap his arm around Neymar’s shoulder in the manner of a hitman befriending you seconds before plunging a needle into your neck.

Neymar ignored him. The next victim, Christian Ramos, was lunging into view with a face that suggested determination and eyes that screamed panic.

In response, Brazil’s No.10 did his best impression of Zinedine Zidane with a breathtaking pirouette that left Ramos stranded in a different postcode.

Aldo Corzo, the covering defender, backed away with studied apprehension while Neymar ran through his repertoire of flicks, skills and stepovers.

The personal humiliation eventually became too much for Ramos and Tapia. While the former tracked Neymar with rising anger, Tapia bundled him to the ground with a weary tap on the ankles.

It spoke of the demoralisation we can all feel when faced with somebody levels above us in our chosen field.

Brazil went on to win 4-0 and Neymar’s earlier goal, his 68th for his country, took him within nine of Pele’s all-time international record.

After the game, he said: “These [goal] numbers are nothing more than my joy of playing for Brazil, representing my country, my family. We’re all going through a very atypical moment, a very hard moment in Brazil and elsewhere.

“To be a role model for someone, to make people happy, it gives me joy. I love the story that I’m writing here, I want my family and friends to be proud. I hope everyone who loves this game are proud of me, because these numbers don’t really mean anything, only the pride of representing Brazil.”

For all the ill-feeling he can attract, Neymar represents a more joyous side of the game and proof that the increasingly methodical feel of elite-level football cannot squash individuality out entirely.

We should cherish a player that can treat an international tournament like a game of FIFA Street.