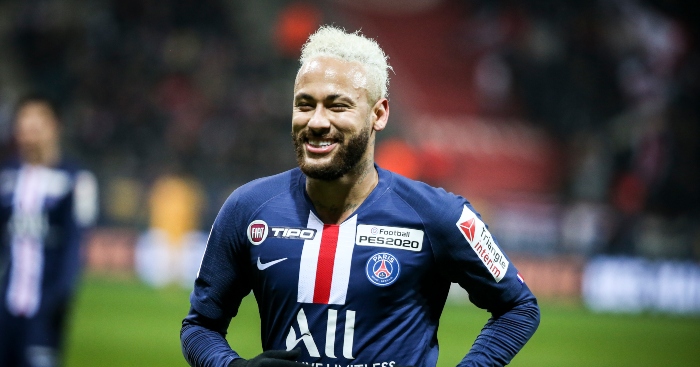 If being bored in France is prompting Neymar to try new things just for the sake of it, he has our full support.

When the Brazilian returned from injury at the end of November, his Paris Saint-Germain side had already secured their passage to the last 16 of the Champions League and already sat eight points clear at the top of the Ligue 1 table.

That might have been enough for some players to just sit back and chill until the European knockout games in February, but not Neymar.

After easing himself back in, PSG’s record signing went on a tear, scoring nine goals in eight games. But that’s not what this is about. Not really.

We knew the move to Ligue 1 would bring plenty of goals for one of the best players in the world, but the question was what will he do if and when he gets bored. Who are we kidding, it’s when.

Will he just have underwhelming, uneventful games when he has to play, I don’t know, let’s say Reims in the Coupe de la Ligue?

Or will he decide that’s the perfect occasion to try something a little different?

First of all, it’s time to pre-emptively ignore all those people rushing to point out that nothing productive came from this. But if you’re worried about Pablo Sarabia failing to do anything with the pass, you’re missing the point.

Without people trying the unexpected, you wouldn’t get moments of greatness. Imagine if Neil Armstrong had thought the moon’s surface looked a bit choppy so it wasn’t worth risking it, or if Isaac Newton felt an apple fall from a tree and decided “meh, it’s probably nothing”.

The same goes for Neymar’s ass pass, or ‘An Iago’ as it might also be termed. You only find out what’s possible when you’re not afraid to try something new.

Exhibiting that amount of control alone is scarily good, and you’re a fool if you think this is the last time it comes into play. This is a man who will try rainbow flicks as if they’re just an ordinary part of the game, so why should any of this come as a surprise?

Neymar had already made his big contribution, sending over a free-kick from out wide which was touched over the line by Reims defender Ghislain Conan.

That wasn’t enough, though, and no one was going to talk about him for that moment alone. It was time to mess about because he can.

Is an opponent still humiliated if he hasn’t had time to really process what’s going on until after the fact? More so, if anything.

The response to the move begins with wondering whether Neymar really thinks so little of you that he’d make you the fall guy in this situation, but eventually you come to realise that – just like your humiliator in chief – you’re coming at things the wrong way.

Neymar would do this to anyone, at any time, because it was never about embarrassing a certain individual. This was a move by Neymar, for the benefit of Neymar, and the proximity of anyone else was essentially coincidental.

If you don’t think he’ll try this again, with much more at stake in a much bigger game, then where have you been for the last three years?

Paris Saint-Germain have six more games to play before their Champions League campaign resumes against Borussia Dortmund in February.

By that time, they’ll have had the opportunity to extend their lead at the top of the table (it’s still eight points), while victory over third-tier Pau in the Coupe de France would see PSG into the last 16.

When the trip to Germany rolls around, Neymar will want to be sure he’s perfected the best and most ridiculous sideshows within his arsenal. Don’t expect him to slow down just because the cameras are on him – in fact, you need to expect the exact opposite.