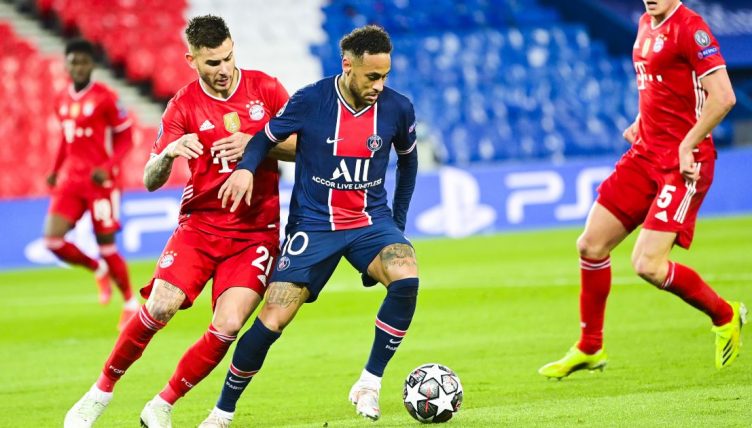 Deep into the second half at the Parc des Princes on Tuesday night, as PSG looked to hang on to the 1-0 loss to Bayern Munich that would see them through to the Champions League semi-final, Angel Di Maria ran the ball up the touchline with two defenders in hot pursuit.

It was the perfect opportunity to get into the corner, protect it and waste time. Instead, Di Maria backheeled it between his two markers, finding Neymar, who returned the favour, a drag-back-backheel combo seeing it straight back into the path of his Argentine team-mate.

It was a moment that summed up both their displays, and particularly Neymar’s. He had been sublime all evening, producing the wonderful passes, fantastic skill, incredible runs and brilliant finishes that make him such an enthralling watch.

Ladies and Gentlemen, who like football, I give you Di Maria, and Neymar playing for #PSG in #ChampionsLeague tonight. ⚠️THIS IS FLITH ⚠️#PSGBayern pic.twitter.com/mrDKKHUfeN

But just as nothing came from the little backheel sequence between him and Di Maria, nothing came of any of his magisterial play in the cold Paris night. Nothing tangible, at any rate.

You could argue that his attacking thrust was fundamental in pulling his team up the pitch and his mere presence was enough to stop the German champions from committing the number of men forward that would have been required to break down the uncharacteristically solid rearguard that Mauricio Pochettino has cobbled together at PSG.

Yet in terms of what really makes the difference, there was nothing. A single PSG goal would have seen Bayern needing to score three to progress, but it would not come.

Ten minutes before half-time, Neymar produced a sublime piece of skill and a delicious curling finish that thwacked back off the bar.

A few moments later, he ran through one on one with Manuel Neuer and clipped it around the huge frame of the ‘keeper only to see the ball rebound out off the post.

In the second half, he got the ball on the halfway line, beat two men with some balletic footwork, laid it off, broke into the box and just, just failed to get his big toe on the end of Di Maria’s teasing cross.

Slap bang in the middle of that little sequence, Eric Maxim Choupo-Moting had bundled the ball into the net in thoroughly unbecoming fashion.

It seemed a little unfair – and it certainly would have done had Bayern scrambled another goal across the line. Brilliance of the highest order from Neymar was less effective in terms of its impact on the scoreboard than a scruffy finish from a player who was struggling to fill the sizeable hole left in the absence of Robert Lewandowski.

Neymar, you felt, deserved something for his skill and panache. To walk away with nothing to show for his efforts was unfair. But in football as in life, what is fair is so often irrelevant.

Neymar produced the sort of whistle-to-whistle performance that, if PSG can finally actually win this thing, might finally earn the Brazilian that Ballon d’Or he so desires. He produced a golden-ball game, and they lost 1-0 to a scruffy poacher’s effort.

Still, he will not feel it was an effort entirely wasted given they went through, which is more than can be said for Mehdi Taremi in the other Champions League quarter-final on the night.

Taremi sat out the first leg of Porto’s game against Chelsea suspended after getting sent off in the round of 16 second leg against Juventus, as a result watching on helplessly as his team went down 2-0.

Then in the second game, Taremi, despite being Porto’s main goal threat, was inexplicably overlooked for the starting XI, made to sit for 63 minutes observing from the bench as Porto failed to make a breakthrough.

Exactly half an hour after his introduction, Taremi produced the goal of his life. The ball was floated over by Nanu and Taremi swivelled, set himself and unleashed a perfectly executed overhead kick into the top corner of Edouard Mendy’s net.

He will likely produce nothing so spectacular again in his career, and if he does, it almost certainly won’t be on such a big stage. But with just seconds remaining it was too late to really matter. Porto won the game but were out on aggregate.

Like Neymar’s demonstrations of great skill, it was a moment of relatively futile brilliance.

Still, maybe there is value in that. Football is about winning and scoring and finding a way through in huge knockout games. But at its best it can also be a pursuit full of aesthetic pleasure, a subtlety often lost in the swirl of goal contributions per 90 and instant match ratings.

Like there is a lot to be said for tragedy in the theatre, there is much to commend tragically thwarted acts of poetic genius on the pitch.

“I obviously feel very comfortable, at home at PSG,” said Neymar on Brazilian channel TNT Sports after the game. “I feel happier than before.”

With displays like his one on Tuesday, he is showing that to be true. And even if he does not produce goals or assists, we know we will continue to delight in his brilliance.

Mehdi Taremi: The long road from the Persian Gulf to the Champions League