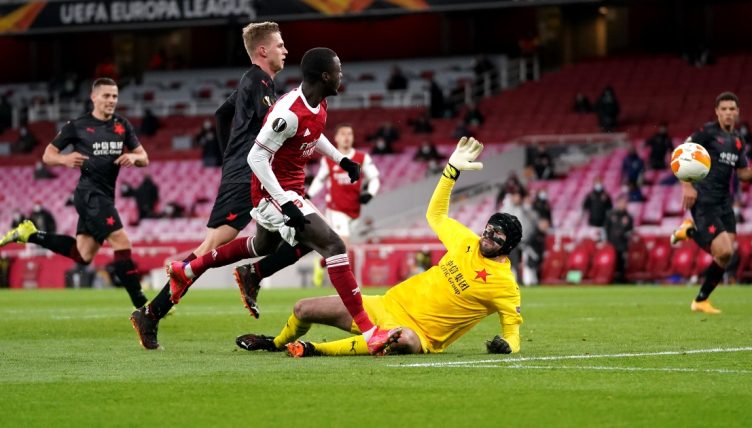 Let’s be frank: the 2020-21 season has not been a lot of fun for Arsenal fans, who should take fleeting moments of joy wherever they can get them. Nicolas Pepe provided one such moment against Slavia Prague.

Watching the Gunners scrap with newly-promoted Leeds United for a place in the top half can’t be easy for a fanbase that enjoyed 20 uninterrupted years in the top four under Arsene Wenger.

It was a reasonable assumption to make that last season’s 8th-placed finish, their lowest since 1994-95 – thanks to Unai Emery’s dreary final months and rookie coach Mikel Arteta taking time to get to grips with a top job – was as far as they could fall.

Last term’s FA Cup win certainly hinted at better days to come, as Arteta demonstrated his tactical chops with strong victories over Manchester City and Chelsea in the semis and final.

Unfortunately, things haven’t quite gone to plan, with another year lost to “trusting the process” and faint hope of winning the Europa League – a long shot based on how Arteta’s men are currently performing – now their last remaining chance of a silver lining.

Put simply, things are just pretty rubbish at Arsenal and given the standards set by Wenger, their supporters have every right to be a bit miserable. This is why they need to take whatever they can get.

Yes, the £72million fee that Arsenal paid for Pepe clings to him like an albatross and is emblematic of Arsenal’s wider institutional issues.

But the Ivorian attacker has at least shown some improvement in his second season in north London, with the odd reminder of why he was so coveted at Lille.

His goal against Slavia Prague, finally breaking the deadlock after 86 agonising minutes, was the kind of moment to savour in times like this.

Like Patrice Evra’s banger against Bayern Munich during David Moyes’ reign at Manchester United, or one of the few times Andy Carroll managed to do something right at Liverpool, instances of real quality shine brighter when everything else is so mediocre.

After he scored, it only took seven minutes for Arsenal to serve a brutal reminder of the club’s state of being in 2021, teetering precariously in the Europa League going into the second leg, having costly away goal equaliser in injury-time after failing to properly defend a corner.

If you’re invested in Arsenal, it’s easy to ruin your evening and wake up in a bad mood the next morning focusing on the naivety at the back, or Alexandre Lacazette failing to put away a golden one-on-one chance. That’s only natural.

But squint at Pepe running through at goal, timing his run to perfection after good work from fellow substitute Pierre-Emerick Aubameyang to play him in, and you can try pretend it’s 2004 and you’re watching Thierry Henry.

Reaching full speed to beat his man, he was still able to execute a technically proficient, confident finish to dink it over the onrushing goalkeeper and send the ball bouncing over the line.

Admittedly, Pepe would have to do something that good 30 or 40 times a season if the Gunners are to ever rekindle their peak Henry glory years.

That’s unlikely to happen, so just enjoy the moments when Arsenal look like Arsenal again.